NORTH LITTLE ROCK — Hayden Daniel spanked a liner to no-man’s land in right-center to drive home[more] Landon Pickett with one out in the bottom of the ninth giving the Bryant Black Sox a thrilling walk-off win and the Senior American Legion State Tournament championship Tuesday night at DeSalvo Stadium in Burns Park. 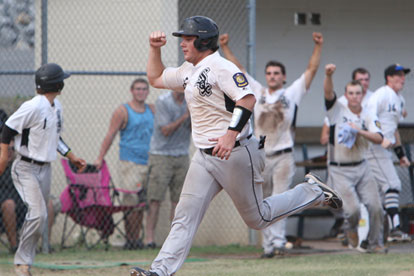 The Sox’ 6-5 win over the two-time defending State champion TEXAR Razorbacks of Texarkana improves their record to 33-5 as they prepare to represent the state in the Mid-South Regional Tournament in New Orleans beginning Thursday, Aug. 9.

Behind a gritty performance on the mound by right-hander Tyler Nelson, the Sox battled back from a 4-2 deficit to tie the game then took the lead on a solo blast by Pickett in the bottom of the seventh. 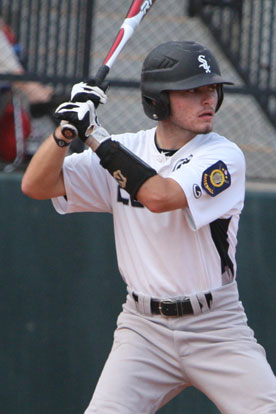 With Nelson approaching the 140-pitch mark, Texarkana rallied to put runners at first and third with one out in the top of the ninth. Tryce Schalchlin relieved Nelson, who received a well-deserved ovation as he left the game. Alan Copeland’s sacrifice fly tied it back up 5-5. But Sox catcher Hayden Lessenberry threw out Trevor Rucker when he tried to steal second and the game went to the bottom of the ninth.

Pickett’s infield hit started the inning. Schalchlin got down a fine sacrifice bunt then the Razorbacks issued an intentional walk to Marcus Wilson.

With two hits in the game, Wilson had improved his average for the tournament to .579 (11 of 19). He would later be awarded the hitting trophy for the tourney.

Lessenberry followed with a long drive to left. With Pickett and Wilson holding up to try to tag and advance, Texarkana left fielder Daniel Thompson, after a long run, couldn’t hold onto the ball just in front of the fence. Lessenberry had to settle for a single but the bases were loaded for Daniel who ripped a 1-1 pitch from Texarkana starter Colton McMahan for the game-winner. 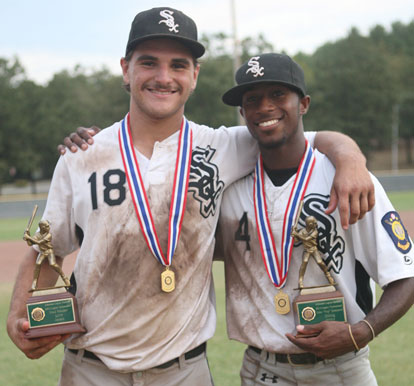 The Sox’ leading hitter Hunter Mayall was named the tournament MVP. He went 4 for 5 in the title game, scored the first two Bryant runs and drove in one in the two-run sixth. Three of his hits were first-pitch doubles. For the tournament, he was 13 of 22, a .591 average that improved his season mark to a phenomenal .531.

Bryant hammered out 13 hits total. Along with Wilson, Pickett, Lessenberry and Daniel had two each. As usual, the Sox were aggressive at the plate.

“That’s what we tell them to do,” acknowledged manager Darren Hurt. “’The first pitch you like, get on it.’ Everybody’s different on that but I don’t like them getting behind 0-1. Then the pitcher has the advantage. Unless we put the take on, (they’ve got a) green light.” 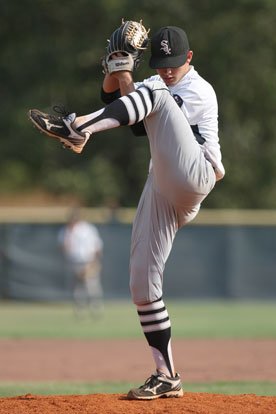 It was fitting that it came down to the final inning between the two teams, which have played each other 12 times in the last two years including eight times in the post-season. In 2011, Texarkana captured the State title with a walk-off one-run win over Bryant in an 11-inning game.

This time, the Sox turned the tables.

“It’s great,” Hurt stated. “It’s been our goal from the start. Two years ago when I took over coaching from Craig (Harrison), we were a young, young team. And this is the team. These guys are the ones that, as 17-year-olds were playing up and playing against some really good competition.

“We always looked for the 18-year-old year to be a good one and the 19-year-old year could be the year and so far it is,” he continued. “As far as I’m concerned, we’re not done. That last (Bryant) team that won the State (in 2007) wound up in the World Series. So our plan is to go to New Orleans then go straight to North Carolina.”

The World Series will be in Shelby, N.C., to be exact, with games starting on Friday, Aug. 17. The 2007 Sox are one of just three in the history of American Legion baseball to reach the World Series from Arkansas. Jonesboro did it in 2008. 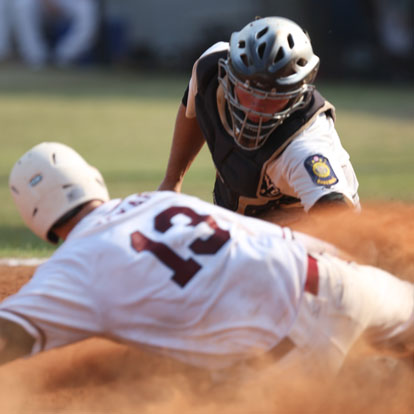 On Tuesday, Texarkana, which would’ve had to beat Bryant twice to win the tournament, got off to a good start. Josey Langston led off the game with a liner to center for a single. Rucker bounced into a force but then stole second and scored on a double by Copeland. Hunter Wilcher pulled a shot over the bag at third for another two-bagger that made it 2-0.

But Nelson got Thompson to pop out then picked Wilcher off second to end the inning.

Bryant got a run back in the bottom of the inning when Mayall crushed the first pitch for a double. Tyler Brown sacrificed him to third and reached base when the ball was mishandled by McMahan. Jordan Taylor delivered the run with a sacrifice fly. 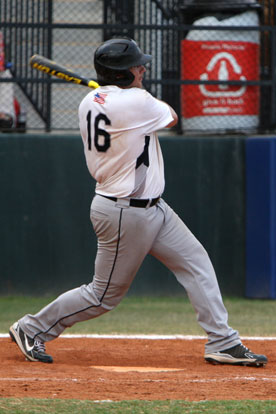 Pickett walked and Wilson singled to load the bases but the Sox stranded all three, part of seven left on in the first three innings and 14 for the game.

Nelson surrendered a one-out double to Ethan Russell in the second and, with two down, hit nine-hole hitter Luke McGuire to bring up Langston who, at that point, was 4 for 4 against the Sox in the tournament. But Nelson got him to pop out to end the inning.

Bryant tied it in the bottom of the second. Mayall’s two-out double set up the inning. Brown was hit by a pitch then Taylor laced a double to the gap in left-center. Brown and Taylor were stranded when Pickett’s hard grounder to second ended the inning.

Texarkana regained the lead in the top of the third. Rucker beat out an infield hit and when Copeland’s single to left drew an errant throw back into the infield, the Hogs had runners at second and third. Wilcher’s sacrifice fly plated Rucker then, with Copeland at third, Thompson hit a flyball to center. Wilson sprinted in to make the catch then fired a strike to Lessenberry in time for the out. 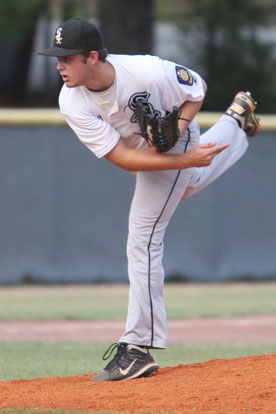 Both pitchers settled in at that point. McMahan worked around a walk to Wilson and an infield hit by Lessenberry in the bottom of the third. Meanwhile, counting the last two outs of the third, Nelson started on a string of nine in a row he set down.

The sixth proved to be an action inning. For Texarkana, a walk to Wilcher with one out and an infield hit by Thompson set the table for Russell’s two-out RBI single. The Hogs tried to steal a run when Russell left early from first but the Sox executed the rundown so well Thompson didn’t have time to score.

But the Sox trailed 4-2. In the bottom of the inning, Lessenberry’s liner was grabbed by Rucker at second but then Daniel bounced a single into left and, with him on the run, Ozzie Hurt lashed a liner down the right-field line that drew chalk. The speedy Daniel raced all the way home, cutting the lead to 4-3 and, on the next pitch, Mayall lined a double to right-center to bring Hurt around with the tying tally.

Brown was hit by a pitch and, with two down, Pickett came to the plate. Mayall, however, left on first move trying to steal third and wound up getting picked off to end the inning, though he worked the rundown well enough that Texarkana might’ve been cited for interference when there was contact between Mayall and McMahan before the tag. Hurt argued for the call but to no avail and the game went to the seventh. 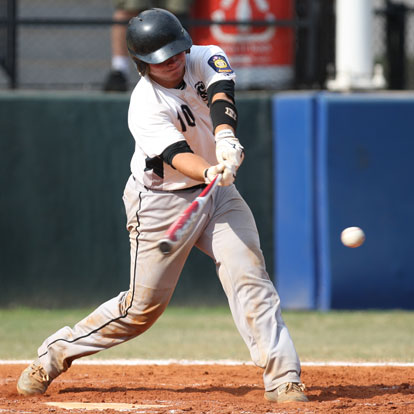 In the top of the inning, a pair of errors put Nelson in a jam with no one out. He got Langston to pop to Brown at third then struck out Rucker as the base-runners, Justin Buchanan and McGuire worked a double steal. The Sox issued an intentional walk to Copeland to load the bags for Wilcher and Nelson stepped up with a big strikeout to end the threat.

“That was the difference in the game,” Darren Hurt asserted. “He had a couple of innings where guys were on the bags, things aren’t looking real good and he got out of it.”

And, on the first pitch of the home seventh, Pickett unloaded for his 10th home run of the season. That’s the most by a Black Sox hitter since Jordan Davis belted 12 in 2001. And that was with a much more lively bat. The last two years, Legion baseball has joined the colleges and high schools in using the BBCOR sticks with arguably a smaller sweet spot than even wooden bats. 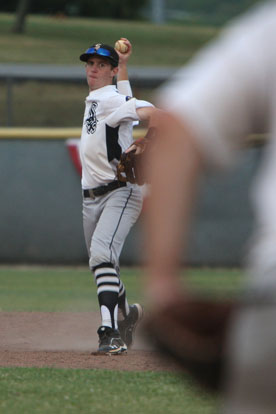 The game went to the eight with Bryant up 5-4. Thompson singled for Texarkana, stole second and took third on a groundout by Russell. He got no further, however, as Nelson again worked his way out of the jam, this time by inducing a bouncer to Brown at third.

The Sox made a bid to pad the lead in the bottom of the eighth when Hurt reached on a one-out error and Mayall singled but McMahan wriggled off the hook to set up the dramatic ninth.

Nelson fanned McGuire to start the inning then Langston singled up the middle. Rucker lined a hit to right-center and Langston raced to third resulting in the pitching change.

“I put him on one’s in the ninth,” Hurt related. “I said, ‘If anybody gets on, I’m going to have to come and get you.’ But he felt wonderful. He wanted to keep going. (Assistant coach) Wayne (Taylor) said, ‘Give him the ball. He wants to keep going.’ But it was the fifth time through the order. They’d seen him all night. I just wanted to show them something different (with Schalchlin). But then the first kid (Langston) got on and I changed my mind and said, ‘I’m going to give him one more.’ Then another kid (Rucker) gets a hit. Nelson deserved the W.”

But now there will be more opportunities with the Black Sox bound for the bayou.

One out when the winning run scored.