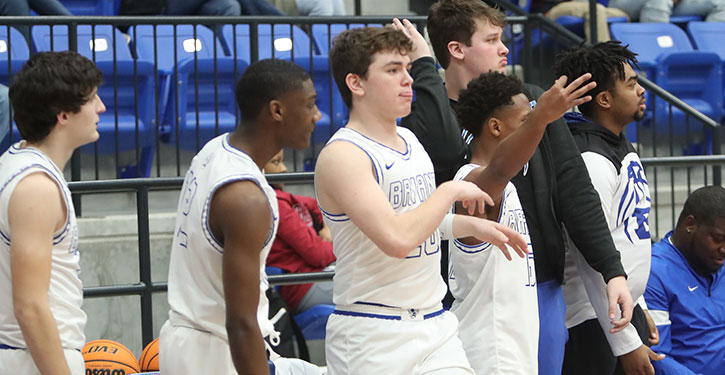 Up until Friday night, the Bryant Hornets have been able to shoot the ball well in their new home at Hornet Arena.

So, it turned into a barnburner until the Hornets managed a little bit of breathing room late.

Sparked by its defense, which started to slow down the Tigers late, Bryant escaped with a 52-48 victory that clinched a bid to the 6A-State Tournament, which will be held at Hornet Arena.

“That should always be there,” said Hornets coach Mike Abrahamson, regarding his team’s defense. “It’s not but it should. It’s something that you can take with you on the road. You need to have it at home as well but that’s just effort and alertness, really. That’s what it comes down to. So, yes, defense won the game for us tonight.”

Not only did the Hornets take five charges — two by Catrell Wallace and one each by Khasen Robinson, Aidan Adams and Treylon Payne — they cooled the Tigers’ 3-point shooting down the stretch. After hitting seven to that point, they only gave up one in the fourth quarter.

“We started defending the ball screen a little bit better, I thought,” Abrahamson said, referring to the high screen that was allowing Central’s players to drive into the paint then kick-out for 3’s.

“We weren’t doing really well with the ball screen for large parts of the game,” the coach explained. “We were doing well with a lot of their sets but when they went to the flat ball screen, we weren’t handling that well. The fourth quarter, we finally did a little bit better job with that. That kind of stopped a little of their momentum offensively.

“The ball-handler was able to penetrate, and we weren’t having to help so much onto him, so he wasn’t able to kick to open shooters. We were able to get out on their shooters better, except on the last two where we fouled them.”

Indeed, the Hornets fouled jump shooters twice in the final 30 seconds as they tried to protect a tenuous 51-45 lead.

With the score 52-46, Central’s Corey Camper was fouled on a 3-point try at the :04.4 mark. He converted twice to cut the margin to 4 then purposely missed the third. The ball was tipped outside by Kiyler Hudson. Jeremiah Jones, who had already hit 3 of 9 shots from distance, misfired one final time as the clock ran out.

Treylon Payne led all scorers with 19 points. Camren Hunter added 14 off the bench — 10 in the decisive fourth quarter — and Khasen Robinson scored 9.

Jones finished with 16 for the Tigers. C.J. Price added 9 and Cody Robinson 8. Camper had 7.

Abrahamson spent a long spell in the locker room after the game. Asked what he’d been talking about with them, he related, “Just how it was ugly, and we did a lot of things that — well, one, we practiced the same way we played tonight the last two days. We didn’t play well. A lot of the credit for that goes to Central. They really took us out of our offensive flow.

“But we feel like we can do better when we practice that way,” he asserted.

“We just talked about how, on one hand, I’m really proud of them for gutting it out and giving great effort all night, taking a bunch of charges and making some winning plays down the stretch to pull away,” the coach recounted. “On the other hand, that was nowhere near our best performance, especially offensively. We’ve got to keep working towards our best performance, more than anything.”

The Tigers appear to be headed for a 6 seed from the Central for State. Abrahamson agreed they’re a very good 6 seed.

The Hornets had the game in hand, leading 48-40 when Central took a timeout with 3:58 to go. Coming out of the timeout, the Hornets lingered in their huddle and one of the officials ruled that it was time for the ball to be inbounded and handed it to the Tigers for a throw-in before the Bryant players had returned to the floor.

With the Hornets scrambling, Jones took the inbounds pass and drove for a dunk as the defense finally got there. Jones was fouled but failed to convert the free throw.

Abrahamson had his players spread the floor, but a missed shot cost them. So, when Jones hit another 3, the Tigers were within 3. They had a chance to cut it from there but suffered a turnover. Hunter fed Payne for a layup to make it 50-45.

The Hornets held off the Tigers’ flurry for the victory.

Payne paced the Hornets as they built a 13-4 lead in the first quarter. The barrage included two 3’s from Payne and one from Robinson.

Johnnie White posted up for a basket then Jones converted a pair of free throws to make it 13-8 going into the second quarter.

Hunter hit two free throws early in the second quarter then, after Camper was called for a charge, taken by Robinson. Catrell Wallace followed his own miss to make it 17-8. A deep, banked-in triple by Cody Robinson was followed by consecutive 3’s by C.J. Price that had the score deadlocked at 17.

The barrage of 3’s continued as the third quarter unfolded. Sophomore Will Diggins scored first for the Hornets off a feed from Robinson. After Jones drained a triple, Diggins returned the favor with a kick-out pass to Robinson for a 3.

Jones and Camper canned consecutive 3’s to give the Tigers a 28-24 lead.

After a timeout, Khasen sank a running jumper and was fouled. He converted at the line to make it a one-point game. Still, the Tigers built the lead back to 34-29 with less than three minutes left in the quarter.

Payne hit two free throws and, moments later, A.J. Jenkins fed Wallace inside for a bucket. Adams took a charge and Payne cashed it in with a 3, putting Bryant back on top 36-34. The Hornets were clinging to a 37-36 lead going into the fourth quarter.

The game was tied at 38 early in the final stanza. Hunter busted a 3 and the Hornets never trailed again.

Camper cut it to 1 at the charity stripe. At the other end, Wallace claimed an offensive rebound and drove to the bucket. That started a 7-0 run. Hunter drove for a layup and, after Payne took a change, popped a 3.

Suddenly, the lead was 48-40 before the timeout that led to some of the turmoil down the stretch.

The Hornets travel to Fort Smith Southside on Tuesday.