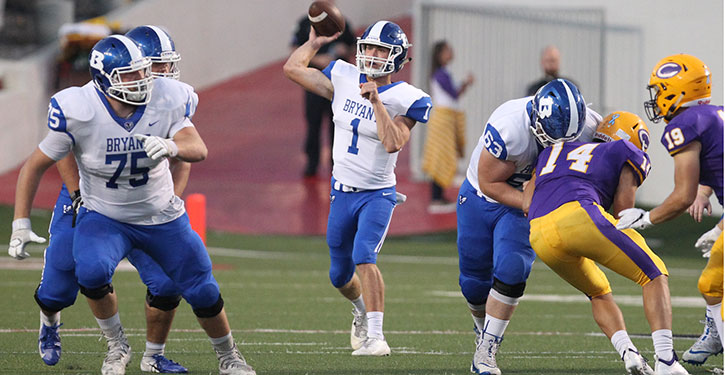 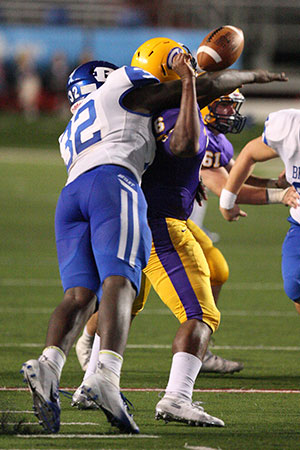 LITTLE ROCK — In 1965, Bryant was a little bitty town and Bryant High School competed at the Class A level. The Hornets’ conference included Pine Bluff Dollarway, White Hall, Lakeside, Pulaski Robinson and Perryville. They won eight games that year, matching a school record that dated back to 1949. Those eight wins and the eight they won in 1960 were the winningest seasons in Bryant history from ’49 to 1998.

And, among their victories in 1965 was a 59-0 blowout of winless Perryville.

It was a point total that hadn’t been matched in the 53 years since. Until this Friday night when the 2018 squad from BHS, now among the largest schools in the state, routed the previously unbeaten Little Rock Catholic Rockets 59-28 at War Memorial Stadium.

That beat the modern record of 58 points set against Sheridan in 2012.

In the game, the Hornets matched the record of 30 first downs, set last year against the Rockets and, with 594 yards of total offense, posted the second most yardage in a game in school history. Only the 626 yards for Bryant against Catholic last year tops that. The 351 yards rushing, led by senior Latavion Scott’s 175 yards on 19 carries, is the fifth highest total ever. 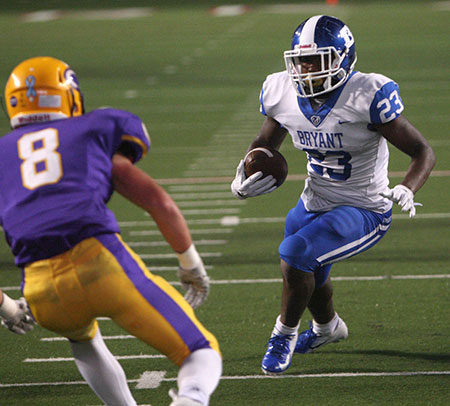 Latavion Scott (23) makes a move to get around Catholic’s Bryce Stine. (Photo by Rick Nation)

Scott rushed for three touchdowns and only carried the ball once in the second half. Meanwhile, the Hornets’ defense shut down Catholic’s all-State tailback Samy Johnson, holding him to 45 yards on 19 carries, though he scored twice. The Rockets managed 201 yards of offense.

Catholic lost yards on 15 of its 66 snaps with Bryant senior defensive end Nate Wallace accounting for six of those as he spent almost as much time in the Rockets backfield as Johnson and quarterback Cooper Monroe.

The record-setting night improved the Hornets to 4-1 overall and 2-0 in the 7A-Central Conference, tied with unbeaten North Little Rock for the top of the league.

Fifth-nine points and the Hornets didn’t score in the first quarter, though they drove to the 2 before giving the ball up on a fumble. Bryant led 31-14 at the half.

In the second half, Braylon Butler scored twice and Treyvon Herron got into the end zone. Both had their first career varsity touchdown. 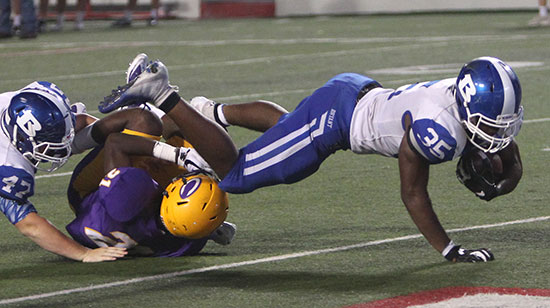 Ren Hefley completed 14 of 23 passes for 195 yards and a touchdown. He didn’t attempt a throw in the second half.

The game was filled with penalties, 11 on Bryant and seven on the Rockets. Pass interference was cited six times.

“We’re not playing our best football yet,” said Hornets head coach Buck James. “We’re going to get better and I think we’ve improved every week so far. And really since the Fayetteville game.” 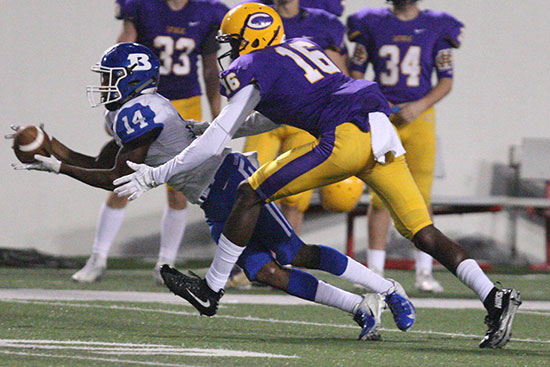 “I like the way our kids approach the game,” he said. “We still have so many mistakes, on third down, a lot of penalties on third down. We’ve got to clean that up. I’d say we had four or five opportunities to get off the field tonight on third downs and they got the conversion through penalties.

“And we can’t go out there and sputter drives,” James said. “We couldn’t do anything with our first two possessions then we had the fumble. So, I feel like we left 21 points out there that we could’ve gotten in the first half.

“All that said, you’ve got to give a 4-0 Catholic team some credit. They’re physical. They made some plays. But I don’t think they ran the ball well against. We had some poor tackling a few times that led to a few decent runs. But we probably held Samy to one of his all-time lows.”

After the Hornets turned the ball over at the 2, the Rockets picked up a first down but stalled after reaching the 14. 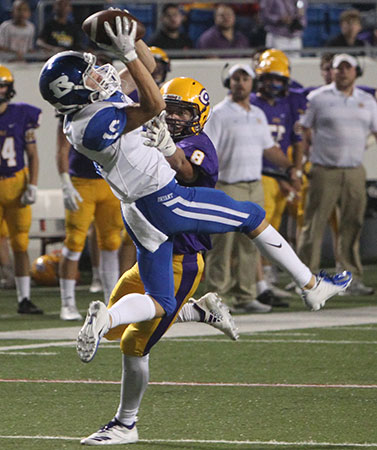 River Gregory hauls in a pass to set up a Bryant touchdown. (Photo by Rick Nation)

Meaders fielded a short punt and raced 27 yards to the Rockets 22 but a holding penalty was assessed against the Hornets. Still, they were just 37 yards away from the game’s first score.

Hefley completed short passes to Meaders, Scott and Hayden Schrader. From the 10, Hefley made the best of a busted play, and ran it to the 1 on the final play of the opening period.

Scott opened the second quarter with a 1-yard touchdown plunge. And with the extra point by Grayson Scoles it was 7-0.

The teams traded punts but, when the Hornets only got a short kick from deep in their own end, William Plafcan returned 30 yards to set up the Rockets’ first TD. Johnson scored from the 3 and Jacob Schneider tied it with his extra point.

“It was probably one of the worst games we’ve had on special teams,” James asserted.

The Hornets answered with a touchdown drive capped off by Scott’s 34-yard gallop, which was set up by a 19-yard pass from Hefley to Meaders. The extra-point kick was no good.

The Rockets went three and out. A solid return of the punt by Meaders had the Hornets at midfield. Aided by a pass interference penalty, the Hornets drove for 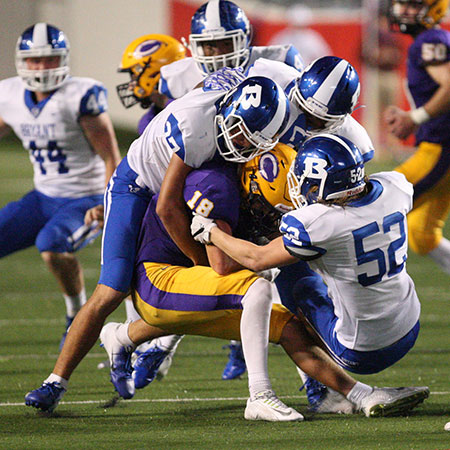 Koby Melton (27) and Tristan Sehika (52) among others, bring down William Plafcan on a kickoff return. (Photo by Rick Nation)

Scott’s third touchdown run, this time from the 3.

Hefley added a two-point conversion run and it was 21-7 with 2:24 left in the first half.

The Rockets answered, despite a 4-yard loss for Johnson as ends Nate Wallace and Austin Bailey converged on him.

But, a third-and-14 pass play broke for 46 yards on a pass from Monroe to Robert Bavon.

The Hornets would score twice before the end of the half.

From their own 37, it took them three plays, all passes. The touchdown fling from Hefley to Meaders was set up by a 36-yard completion to River Gregory. The score came on a bubble screen that Meaders broke for a touchdown. With :49 showing, Bryant led 28-14.

And when Derrick Rose intercepted a pass with :35 left, the Hornets drove to the 13. The half ended with Scoles’ 30-yard field goal.

Scott’s only run of the second half, came on the first play and broke for 30 yards. Butler took it in from there to make it 38-14.

The reserves were filtering in after that for Bryant. But Austin Ledbetter’s first pass was picked off. Led by junior quarterback Jordan Eddington, the Rockets drove to paydirt. Johnson scored from 8 yards out.

Pounding the Rockets, it took Bryant’s reserves 10 plays to go 65 yards. Adams and Butler almost traded carries before Adams 15 yards into the end zone. With Scoles’ kick, it was 45-21.

On the Rockets’ next play, Eddington was smacked by Nate Wallace and Josh Salguerio recovered the fumble.

Butler muscled in from the 6 and with an extra point by Brock Funk, Bryant led 52-21.

Monroe scrambled in for a touchdown with 6:23 left to play. The scoring drive was aided by another interference penalty.

A fumble on the kickoff returned possession to Catholic. Aided by yet another pass interference, the Rockets drove to the 26 when Jake Wright bounced Brian Allsbrook for a loss and they were unable to recover.

Catholic made a second interception with 2:04 remaining but the Rockets’ offense couldn’t take advantage. Bryant took over on downs at midfield with just 50 seconds left. A play later, Herron broke a 49-yard touchdown run and Funk added the PAT to set the final score. 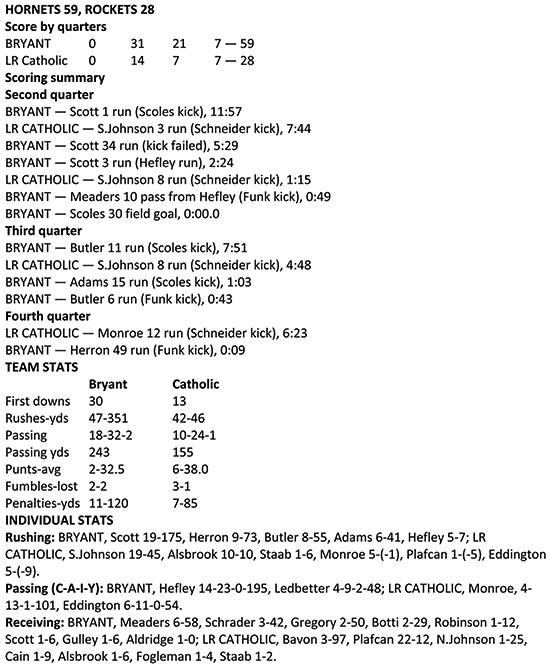