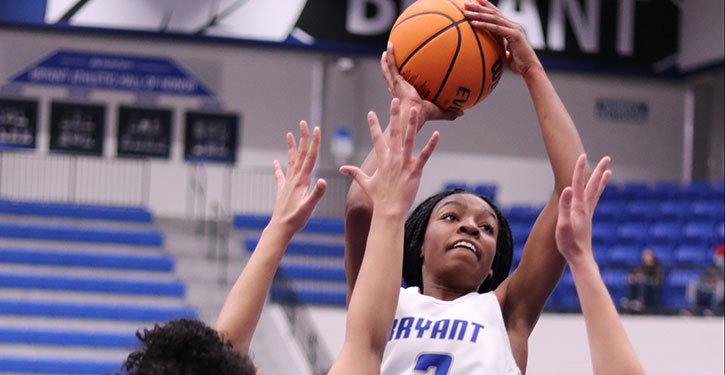 CABOT — Hats off to Joanna Scott.

The Bryant Lady Hornets’ assistant coach is in charge of defense. And, on Friday night against a Cabot Lady Panthers team coming off a big upset of North Little Rock earlier in the week, defense proved vital. The Lady Hornets held Cabot to 29 percent shooting from the field including a 3 for 21 effort beyond the 3-point arc. The Lady Panthers turned the ball over 18 times and the Lady Hornets came away from Cabot Arena with a 36-31 victory.

Bryant is in the midst of a regular-season-closing gauntlet of six games in 10 days as they make up three 6A-Central Conference games that they missed in January due to COVID restrictions. On Tuesday, they started the blitz with a 65-39 loss at Conway. It continues on Saturday at Little Rock Southwest, at noon, then continues with games Monday (at Mount St. Mary), Tuesday vs. Southwest and Thursday vs. Little Rock Central at home.

The win on Friday gives the Lady Hornets a season sweep of Cabot and an inside track to the number five seed from the Central for the State Tournament in Fayetteville, which starts Tuesday, March 9. They still have a shot at finishing fourth.

Friday’s game was a one-possession battle with 1:36 left. The Lady Hornets were clinging to a 34-31 lead after Cabot’s Brooke Leonard followed her own miss and scored.

Bryant’s Parris Atkins, who finished with 18 points and 10 rebounds (both game high’s) despite missing time late in the first half after turning her ankle, couldn’t get a 12-foot jumper to fall and, with 1:12 left, Leonard was fouled. But she missed the front end of the one-and-one and Bryant’s Emileigh Muse rebounded.

When play resumed, Atkins drove into the lane but had her shot blocked by Cabot’s 6-foot post Paige Siegler. Muse, however, battled for the rebound.

At the other end, the Lady Hornets worked the clock and, with :39.5 left in the game, Matthews called another timeout with the score still 34-31.

But when play resumed, the Lady Hornets only had 3 seconds on the shot clock. But that didn’t turn out to matter as Cabot forced a five-second violation, preventing Bryant from inbounded the ball.

The Lady Panthers got two shots at the other end. But the 3-attempt by Delaney Ringgold missed. Cabot rebounded and missed again then made a desperate try for the carom once more only to have Bryant’s freshman point guard, Brilynn Findley come out of the pack with it. She passed ahead to Atkins who got behind the defense for a game-clinching layup with seconds remaining.

“That was fun,” declared Matthews. “Coach Scott did a tremendous job.

“To beat Cabot at Cabot is really good. I couldn’t be happier,” the coach asserted.

Regarding Cabot’s poor shooting from 3-point land, Matthews said, “A lot of them were a little deeper than normal. There weren’t a lot of them on the line. (Theobald) got a few rhythm threes but I think she rushed a little bit some. I thought that was important. You try to limit what they do well. I thought we did a really good job guarding them as a group, guarding their strengths.

“(Theobald) is a really great player, going to Harding,” he noted. “(Laylah Reese) is an awesome player. (Jenna Cook) and (Alayna Evans) shoot it really well. They are talented and I thought we did a great job defensively. We rebounded better for most of the night.”

Bryant finished with a 35-31 edge on the boards. The Lady Hornets’ total included 14 offensive rebounds. They also attacked the basket to earn 23 free-throw attempts. Cabot, which played much of the game on the perimeter, attempted just 12.

Leonard led the Lady Panthers with 8 points. Reese had 7, Theobald 5.

To go with Atkins’ double-double, Lauren Lain stepped up with 6 points. Despite foul trouble, Muse had 5.

The Lady Hornets got big contributions off the bench from Shamya Jordan and lone senior Lauryn Taylor.

With Muse then Lain in foul trouble in the second half, Taylor came in and grabbed four key rebounds including three on the offensive end.

Jordan came in after Atkins, the team’s leading scorer and lone returning starter from last season, was injured with 2:40 left in the first half. At that point, Cabot led 10-9. At halftime, Bryant had taken a 15-14 lead. Cabot was limited to two free throws by Theobald with :51.8 left. In the meantime, Findley hit a free throw and Muse scored all five of her points including a 3.

“I thought our kids, emotionally, really responded to that,” Matthews observed. “Shamya came in there at the end of the first half and gave us some good minutes. Lauryn Taylor, in the second half really rebounded well.

“But that time, right before the half, when it could’ve gotten away and it didn’t — that’s big,” he emphasized. “When it’s a close game, everything matters but I thought that portion of the game where we easily could’ve been on our heels a little bit, we weren’t. And that’s a credit to the girls growing up a little bit.

“Now, the next question about us growing up is, how do we handle it tomorrow?” the coach stated. “It’s a great opportunity. I’m excited.

“I told the team, there’s COVID, a pandemic around the world. We got quarantined. There was 20 inches of snow. And we’re still playing basketball. Man, what a blessing.

“Tomorrow we get to go play another game. There’s basketball players around the country that don’t get to do that. There’s a lot of high schools that hadn’t got to play a game. So, we’re privileged. We’re blessed and we’re excited we won tonight.”

Bryant led early 7-3 on a triple by Natalie Edmonson and a pair of jumpers from the elbow by Atkins. Cabot surged back and led briefly 8-7 before Atkins hit two free throws to make it 9-8 going into the second quarter.

It was a defensive battle both ways at that point. When Atkins hit those free throws to give Bryant the lead, there was 1:58 on the clock. No one scored in the second quarter until the 5:21 mark — a drought of over four minutes. Reese ended the stretch with an offensive rebound basket to give Cabot a 10-9 lead.

That led to Bryant’s little spurt at the end after Atkins was helped off the floor.

She gamely came back in the second half and scored 12 of her 18 points.

But first, Cabot pushed out to its largest lead. A 3 by Theobald and a driving jumper by Leonard had them up 19-15. They had a chance to increase the margin after claiming a held ball. But Atkins made a steal that led to a driving basket by Lain. Findley followed up with another theft that resulted in a trip to the free-throw line. She converted twice to knot the game at 19.

Evans 15-foot jumper untied it but a free throw by Edmonson and a three-point play by Lain had Bryant back on top.

Leonard tied it at 23 but, with :45 left, Atkins was fouled on a 3-point try. She coolly went to the line and converted all three shots and the Lady Hornets never trailed again.

Off another Cabot turnover, Atkins beat the buzzer with a short jay to make it 28-23 going into the fourth.

A free throw by Lain and a pull-up jumper by Atkins increased the margin to 31-23 before Cabot finally converted on a 3 by Cook. And the Lady Panthers rallied to within 34-31 near the end, setting up the dramatic finish.