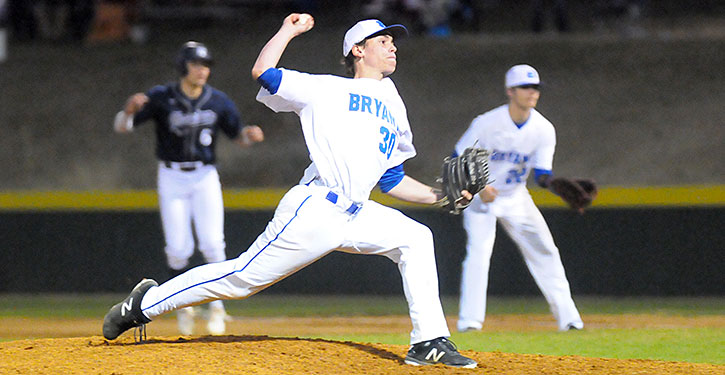 With two out and a runner at first in the bottom of the sixth, Austin Ledbetter battled Little Rock Christian Warriors’ right-hander G. Allen to a 1-2 count. He spoiled one pitch then ripped a liner to right-center. The Warriors’ right-fielder Isaac Nowell raced into the gap and made a headlong dive for it. Though he got a glove on it, Nowell couldn’t haul it in.

With two down, Logan Chambers, the runner at first, was off on contact and scored all the way from first to snap a 5-5 tie.

Right-hander Braden Knight, who relieved in the top of the sixth and kept it tied after the Warriors had plated four runs, set down the side in order in the top of the seventh as the Hornets pinned down their second one-run win in as many nights to open the season, 6-5, at Bryant High School Field.

“Finding a way — I hope that’s the story of the team this year,” said Hornets coach Travis Queck. “These guys battled up.”

After managing just four hits at Hot Springs Lakeside on Monday in a 4-3 win, the Hornets pounded out seven on Tuesday including two each from Ledbetter and Coby Greiner. Logan Grant added a clutch two-run double.

“It was better,” Queck said of the hitting. “We had some timely hits. We had some situations where we took advantage of opportunities that they gave us. And, a lot of times in this game, it’s not necessarily — you don’t win the game, you just don’t lose it. If somebody’s bound and determined to give you an opportunity to gain an edge — and they did with a couple of walks and a hit-by-pitch that we took advantage of.”

That was part of Bryant’s four-run fifth that started with the game tied 1-1.

“I think that’s a testament really to the character of the guys,” the coach asserted. “Doing it two days in a row. Yes, we want to play a heck of a lot better but we’re playing bad and winning games.

“We’ve got a lot to fix,” he emphasized. “We had a quick turnaround this morning, came in and worked and we can blame it on being dead-legged or whatever. The fact is, we’ve got things we’ve got to fix. And the guys know that.”

Dillon retired the first 10 batters he faced. White worked around a two-out single to Ledbetter and a walk to Jake Wright in the first then set down the side in order in the second.

In Bryant’s third, Greiner led off with a single up the middle, raced to third on an errant pickoff throw and scored on Chambers’ grounder to first to make it 1-0.

In the top of the fourth, Allen broke up Dillon’s string with a double down the line in right. He tagged and went to third on Tollett’s fly to right then scored when Dillon, trying to pick him off third, was called for a balk.

The Hornets’ junior issued a walk but came back to get Nowell to pop to Ledbetter at first. He then came back and retired the Warriors in order in the top of the fifth, fanning two.

In five innings, he had five strikeouts, the one walk and allowed the one hit.

“For whatever reason, we started off slow the last two games,” Queck said. “Their first guy (White), kind of an awkward drop-down guy — we had to stay in the middle of the field. And, early on, our only base hits were in the middle of the field. It stayed true, but I think we just had a bad day picking pitches, picking up pitches we needed to hit, that we were capable of hitting. We’re swinging at more of their pitches.

“I thought Peyton did a really good job,” he added. “I thought he labored at the end. At about the 50-pitch mark, I thought, yeah, we need to start looking, whether it was him waiting between innings and all that or all the pitches he’s thrown combined today, I saw him losing some velo and I was about to make a move. But Peyton did a good job of attacking, doing exactly what we needed him to do today.”

It helped when the Hornets mounted a two-out uprising in the home fifth against Warriors’ reliever Jackson Woodard. He had retired the first two without much trouble but then he walked Drennan on a 3-2 pitch.

The count went to 3-0 on Ledbetter so the Warriors decided to just send him to first with an intentional ball four. The same thing happened to Jake Wright. Once it got to 3-0, they just sent him to first.

With the sacks filled, Gage Stark worked the count to 1-2. The next pitch was tight, and Stark took one for the team, forcing in the go-ahead run.

And when Woodard walked Noah Davis to force in another run, a pitching change was made. Reid Bowman came on to face Grant, who got behind 0-2. After fouling off a tough pitch, Grant laced one to left-center for a two-run double to make it 5-1.

Garrett Wilson made his first mound appearance of the season for the Hornets to start the top of the sixth. Sam Chesshir greeted him with a double to right. A hit batsman and a walk loaded the bases for Tollett, reportedly a University of Arkansas commit.

Knight came in and got a strike away from getting the slugger out, but his 1-2 pitch was smacked into the alley in left-center to clear the bases. Clean-up hitter Bradley Freier followed with a sacrifice fly to tie the game.

But Knight kept it there, working around a two-out single to Bowman, ending the frame by fanning Woodard.

“Braden comes in, bases loaded and nobody out,” noted Queck. “You don’t really want a bases-loaded triple to be your first at-bat but that guy’s good. Braden settled up right there and did a dang good job of getting out of a tough situation and eventually getting the win.”

Greiner opened the bottom of the sixth with a shot to left-center. He tried to stretch a single into a double but a nice play by left-fielder Spencer Whipple prevented it as he threw him out at second.

Chambers, however, followed with a lined single to right.

After Drennan flew to center, it brought up Ledbetter who delivered.

Knight opened the seventh by striking out White. He got Chesshir to fly to Greiner, who made a fine running catch in right-center. Loggins grounded out to Catton at third to end the game.

The Hornets, now 2-0, head to Texas for a weekend tournament in Waxahachie starting Thursday. They’ll open the Dulin Memorial Tournament against Sherman, Texas at 4:30 p.m., and against the host team at 7 p.m.