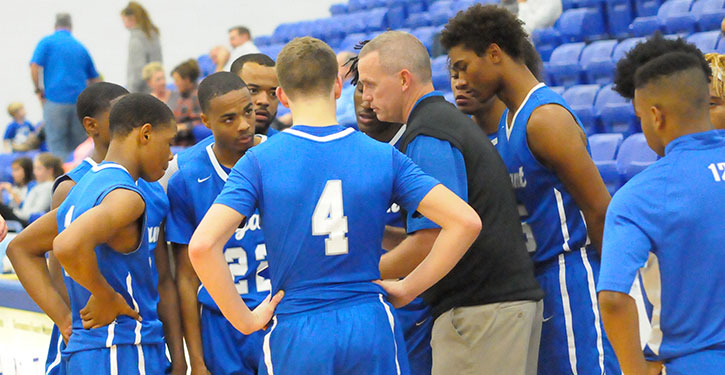 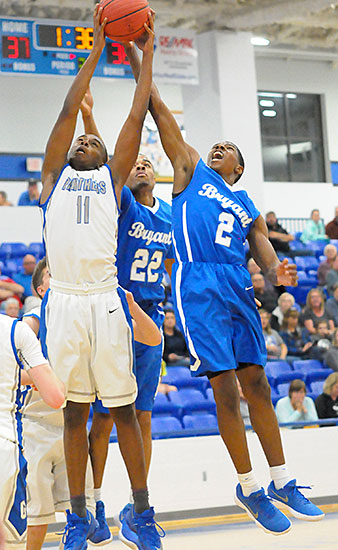 GREENBRIER — The Bryant Hornets extended their defense into a half-court trap to start the second half and, after trailing by 8, managed a 40-39 lead over the Greenbrier Panthers on Tuesday night. But, with the first basket of the fourth quarter by Tanner Tilley, the Panthers found themselves on top again and it looked like it would be a barn-burner to the wire.

But the Hornets started eviscerating Greenbrier’s 1-3-1 zone with drives to the hoop and dump-off passes inside or kick-outs for 3’s. The result was a 13-0 blitz that put the Hornets in the driver’s seat on the way to a 61-48 victory to open the 2017-18 season.

Four players finished in double-figures for Bryant, led by senior Sam Chumley with 15 and senior Deron Canada with 14. Khalen Robinson pitched in with 12, Rodney Lambert had 10 and freshman Camren Hunter 8.

Greenbrier’s Devin Clark and A.J. Matthews each finished with 12 to pace the Panthers.

“We kind of held onto that, if we needed it,” said Hornets coach Mike Abrahamson regarding the half-court trap. “I was really disappointed in our first-half performance, really defensively and offensively.

“It’s the first game,” he acknowledged. “We’ve got a lot of new kids, young kids. We can use that as an excuse if we want to but we’re not going to do that. We didn’t play well the first half. We didn’t rotate correctly on defense. We didn’t do the so-called little things like communicate and point and have our hands up. It just didn’t look the same as it did in our jamboree. I’m not quite sure why other than the fact that Greenbrier has a good team. 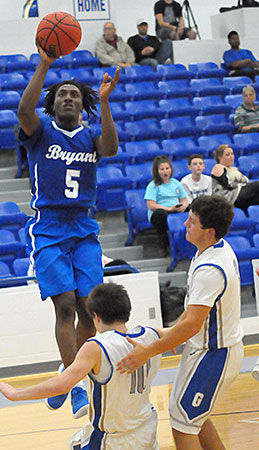 Rodney Lambert pulls up for a jump shot over a pair of Greenbrier defenders. (Photo by Kevin Nagle)

“Offensively, I thought we were settling for shots,” the coach mentioned. “We weren’t being aggressive like we wanted to, so we go to the half-court trap to start the second half.”

After turning the ball over just three times in the first half, the Panthers committed 17 in the second half. And the smaller Hornets wound up with a 30-28 rebounding advantage in the game.

“We turned our defense into some offense for some easy baskets, got to the free-throw line more,” Abrahamson explained. “I didn’t know if we would stick with it pretty much the whole second half but it was working. You’ve got to give our kids credit for fighting back, responding and really disrupting what they wanted to do.

“Then, our offensive execution was better the second half whenever we weren’t in transition,” he noted. “At the end of the game, when we were back to our regular defense, that was so much better than it was in the first half.”

Greenbrier hit the Hornets with an 11-2 start that featured the 6-6 Matthews and was punctuated by a 3 from Kobe Dunlap.

After a timeout, Chumley stepped up with back-to-back 3’s. A steal by Hunter led to an offensive-rebound basket for Canada and it was 11-10.

Greenbrier’s Dylan Wilson hit a jumper in the lane to make it a 3-point game at the end of the quarter. 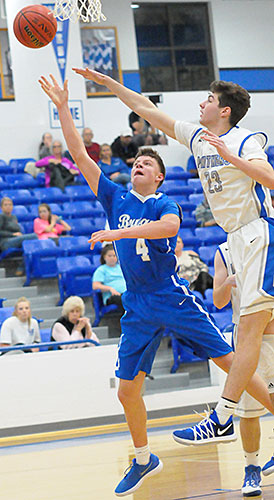 Sam Chumley scoops up a shot to get it past Greenbrier center A.J. Matthews (23). (Photo by Kevin Nagle)

Lambert’s triple off a kick-out pass from Canada tied it but the Hornets weren’t unable to regain the lead until Canada drove the baseline and fed Ethan Hilkert in front of the basket as he banked it in. Juwan Clifton missed and, at the other end, Hunter hit a layup to give the Hornets a 21-20 lead.

But Greenbrier ended the quarter on a 7-0 run that was extended to 9-0 with Matthews scoring to start the third period.

Down 29-21, the Hornets clawed back into it as they began to extend the defense. Robinson converted a pair of free throws then, off a Greenbrier turnover, Hunter fed Robinson for a layup.

Clark drove for a basket but Canada hit a free throw then the Hornets’ pressure forced a turnover and a timeout by the Panthers.

But it didn’t help. Canada followed his own miss, Chumley made a steal and Robinson cashed it in with a layup. Hunter’s theft set up a lay-in for Lambert and a 32-31 Bryant lead.

The Hornets led 40-39 going into the fourth quarter before Tilley’s basket gave the Panthers their last lead.

Chumley scored inside and, off a Greenbrier turnover, hit the offensive glass to give the Hornets a 44-41 lead. Clifton missed the front end of a one-and-one and Canada extended the margin with a 3.

Another Panther turnover led to another bucket by Chumley. Off another Greenbrier miscue, Hunter fed Canada. Robinson made a steal and Chumley got the ball to Hunter for a basket and a 53-41 lead. 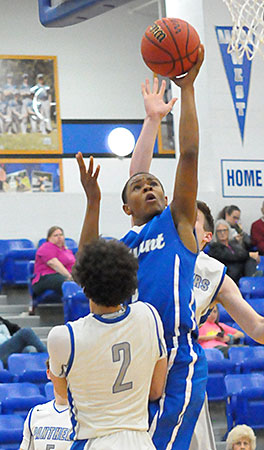 Camren Hunter finishes off a drive with a shot between a pair of Greenbrier defenders. (Photo by Kevin Nagle)

Dunlap stopped the bleeding with a 3. A basket from Austin Thomey followed, trimming the margin to 53-46. He was fouled on the play and when he missed the free throw, the ball went out of bounds off the Hornets.

Abrahamson called a timeout with 3:10 left and, when play resumed, an illegal screen cost the Panthers a chance to cut the margin to 4 or 5.

Instead, Lambert fed Canada for a basket and Greenbrier went cold. The Panthers only managed a basket by Matthews with 1:54 remaining. The Hornets closed with an 8-2 run.

“We’ve got to get better,” Abrahamson insisted. “These guys have got to understand that. We don’t have to go on an 8-0 run for everything to work. It’ll work. We’ve seen it work. We just have to stick to that plan and not get caught up in whatever else they’re thinking about, which could be any number of things as teenagers go.

“It’s going to be a work in progress,” he related, “but I’m proud of them for the effort, coming back. Their response coming out at halftime was good. And we were able to sustain it.”

The Hornets head to Bentonville for the annual Crabtree Invitational Tournament today. They’ll take on a team of home-schooled players at 8:30 tonight.