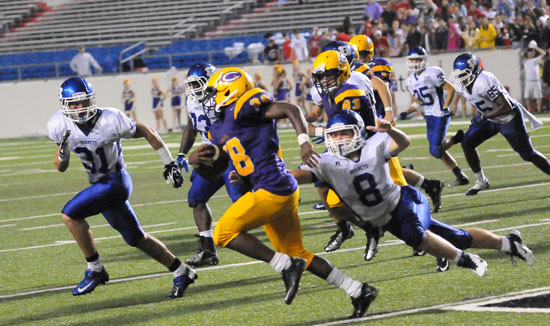 LITTLE ROCK — A touchdown instead of a field goal; a made field goal instead of a miss; a stop on fourth[more] down — if any one of those had occurred in the fourth quarter of their rain-soaked game on Friday night at War Memorial Stadium, the Little Rock Catholic Rockets would’ve clinched their first victory of the season. 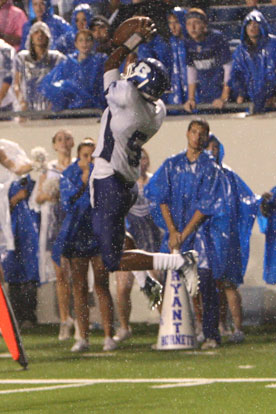 As it turned out, however, the field goal, the miss, and the fourth-down conversion — on a phenomenal throw and catch from senior Hayden Lessenberry to sophomore K.J. Hill — combined to lift the Bryant Hornets to a thrilling 19-18 come-from-behind victory.

Senior running back Jalen Bell scored on a 7-yard run with 1:40 left to play to tie the game then senior Josh Lowery added the extra point to provide the winning margin.

But that wouldn’t have happened but for those other three occurrances.

Bryant, leading 12-7, suffered turnovers on four consecutive possessions in the second half, all in their own end. Aided by senior Tim Kelly’s tackle for a loss then a bad snap that wound up costing the Rockets 12 yards, the Bryant defense prevented Catholic from taking advantage of the first turnover, an interception by Zach Boyce.

The Rockets turned the ball over on downs at the Hornets 30. A play later, however, they had it back when Lessenberry, back to pass, had the slippery ball slip out of his grasp. Catholic’s Nick Hiatt pounced on the ball at the Bryant 15.

The Rockets needed five plays — three inside the 2 — to find the end zone. With 9:33 left to play, quarterback Zac Pinter just got in on a third-down quarterback sneak. 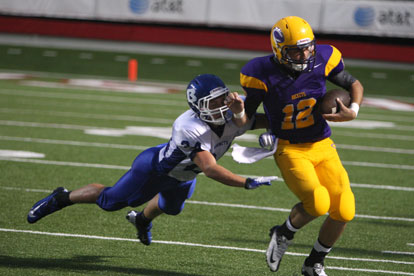 Up 13-12, Catholic went for two and when Pinter’s throw was caught by Jacob Currence, the margin was a field goal.

Bryant’s defense, which had nearly finished off a goal-line stand, was back on the field moments later when, on the ensuing kickoff, the ball came loose again. This time, Barth Onyekwelu recovered at the Bryant 11.

This time, the Hornets’ defense did indeed hold. Pinter’s third-down run from the 5 only reached the 3 and Jacob Morehart came on to kick a field goal — points, but not what the Rockets had hoped for. Instead of a touchdown that might’ve clinched the win, putting Catholic two scores ahead with 8:05 left in the game, the Hornets had life. Trailing by only 6, they had a chance to take the lead back with a touchdown and extra point. 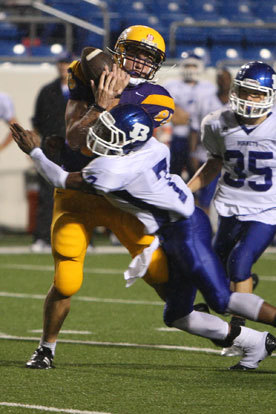 But first, a little more adversity: After just missing connections on a long pass to Brushawn Hunter, Lessenberry, trying to dump off a screen pass over the middle, was picked off by Catholic’s Garrett McLaurin, who returned the ball to the 15.

With another chance to clinch the win, however, the Rockets were denied by the Bryant defense, which held at the 12. With 5:36 left to play, Morehart entered with the opportunity to make it a two-score lead with a field goal. But he miss-hit the ball and it fell short of the mark.

Given another shot by the defense, the offense stepped up. The drive got off to a false start when the Hornets were flagged for procedure. What followed was a scoring drive that just might be a season-defining event.

“We gave them every opportunity to win the football game, to put it away at the end,” noted Hornets head coach Paul Calley. “Our defense gave us one more chance. It rose to the occasion, several times. Somehow someway we were able to convert a couple of big third downs and a big fourth down to find a way to get it into the end zone.”

The first third-down conversion came early in the series. Facing a third-and-10 at its own 20, the Hornets picked up the first down when Lessenberry found Brushawn Hunter for 12 yards. 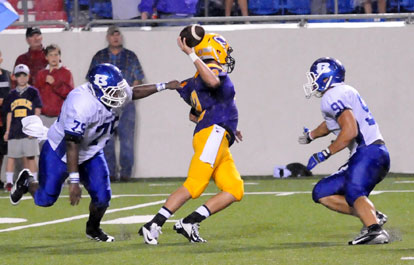 Completions to Hill and Hunter moved the ball to the 46. Bell then ripped an 11-yard run into Catholic territory. A play later, Lessenberry found Hill again over the middle for 18 yards.

But the drive nearly stalled after that. At the 22, Lessenberry scrambled to get to the 18 and, after an incomplete pass, the Hornets faced a fourth-and-6. There was just one place that Lessenberry could’ve thrown the pass to give Hill a chance to catch it. It was high and to the outside. Hill climbed the ladder to latch onto the ball then somehow got a foot down inbounds at the 7.

“From where I was I didn’t think there was any way he could get a foot inbounds,” Calley related. “It was an amazing catch and throw.” 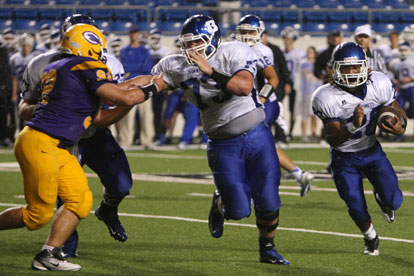 Bell sliced up the middle on the next play for the touchdown and, with 1:40 still to play, Lowery drilled the difference maker on the extra point.

A squib kick by Lowery on the ensuing kickoff had to be covered by Catholic at the 17. Jake Johnson, who intercepted a pass earlier in the game, nearly got his second but couldn’t hold on. On the next play, Pinter had to bail on the pocket. With his receivers covered and Kelly hot on his tail, the junior quarterback threw the pass away. And when a third-down pass fell incomplete, the Rockets decided to punt the ball away in hopes of using their three timeouts while forcing the Hornets to go three-and-out. 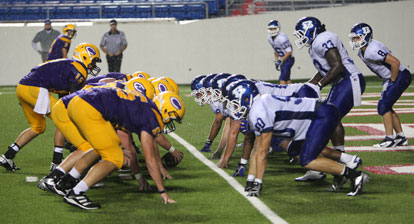 But, on a third-and-3 from the 41, Bell dashed for 7 yards for a first down, sealing the Rockets’ fate.

“I’m proud of our kids,” Calley stated. “They never quit.

“I was proud of Hayden,” he added. “He had a couple of bad things happen. He could’ve shut down and he didn’t. We had to have him and he got it done. He made the throws, our pass protection, the kids catching the ball —to put that kind of drive together under that kind of pressure, that’s a character-building drive.” 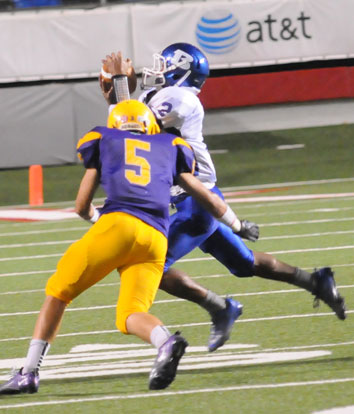 The Hornets had marched, for all intents, 85 yards in 13 plays while under the gun, trailing with time running out in the game.

“We’ve still got some work to do on both sides of the ball,” Calley asserted. “We’re not near where we need to be. But to come away with a win in the situation we were in, I think it just speaks volumes about our kids and our coaching staff, to be able to hang in there and get it done.

“The rain hampered us tremendously,” he mentioned. “There were some things that we wanted to do but we couldn’t. The screen game was one of them. We tried a screen and the ball slipped out of Hayden’s hands. The field conditions weren’t bad but the rain was.”

Bell wound up with 84 yards on 17 carries. Lessenberry completed 15 of 28 passes for 138 yards and two touchdowns.

The Hornets’ defense limited Catholic to a net of just 116 yards of total offense after the Rockets had opened the game with a 77-yard scoring drive in 17 plays that ate up 7:16 of the first quarter. 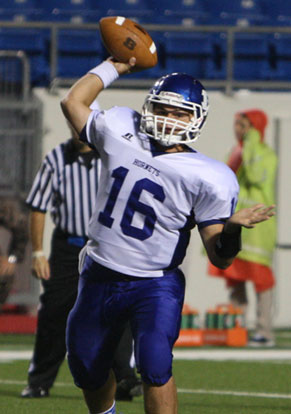 The pick was made by Johnson and, as a team, Bryant broke up 12 passes, four by Aaron Bell alone. Johnson also led the team in tackles with eight. Fellow safety Davis Nossaman, along with linebackers Bryce Denker and Tyree Reese, got in on seven stops apiece.

On the opening drive, Catholic converted four third-down situations and one fourth-down. The latter came when the Rockets needed 8 yards from the Bryant 32 to keep it going. Pinter passed to Brown for just enough, 9 yards.

Two plays later, it was third-and-2 at the 15. Pinter passed over the middle to tight end Aaron Hamaker and the Rockets had a first-and-goal at the 2. Brown scored on the next snap and Morehart made it 7-0.

Bryant got on the board initially when, on the third play of the second quarter, Alex Myers was back to punt and the snap sailed over his head and into the end zone where he fell on it just before Kelly got there, taking a safety instead of giving up a touchdown.

After Aaron Bell’s long return of the free kick, Bryant drove from the Catholic 41 to the 23. On fourth down, the blitz got to Lessenberry. Cole Boardman got the sack at the 31 and the Rockets took over on downs. 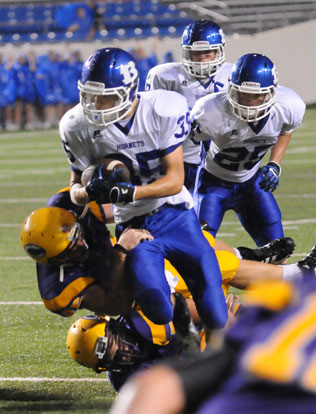 Bryant forced a Catholic punt and, with 7:46 left in the half, the Hornets’ offense drove 55 yards in 10 plays. Lessenberry was 5 of 6 on the drive. The fifth completion came on a third-and-9 from the Rockets’ 10. Hill, running a pattern over the middle pulled in Lessenberry’s pass for the touchdown with 4:05 left in the half.

Lowery made it a 9-7 Hornets lead, which held at the half.

Catholic covered kickoffs very well all game long and, to start the second half, pinned the Hornets back at their 12. Bryant drove it out to the Rockets’ 42 before stalling. Denker punted Catholic back to the 16 and a few plays later, Johnson made his interception.

Hindered by a holding penalty, the Hornets could only get back to the 24 and, on fourth down, Lowery came on to drill a 36-yard field goal that had Bryant up 12-7.

The defense, in turn, forced a three-and-out then the flurry of Hornets’ turnovers commenced, fueling the Rockets’ surge into the lead.

Bryant completes non-conference action (all against teams that were league rivals a year ago) with a 2-1 mark. They begin play in the 7A/6A-South Conference on Friday, Sept. 21, against the rival Benton Panthers in the annual Salt Bowl back at War Memorial Stadium. 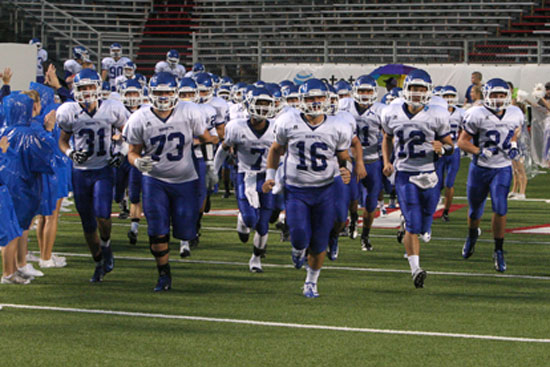