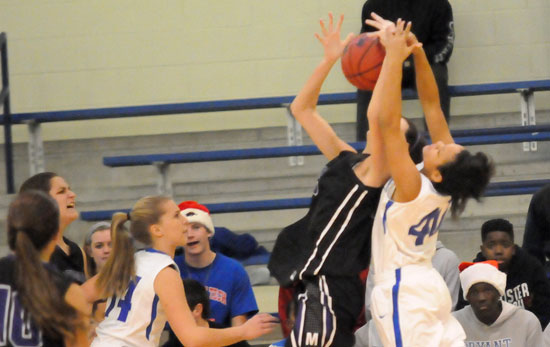 There weren’t very many uncontested shots taken when the Bryant Lady Hornets and Mount St. Mary Mounties tangled in a freshman game at Bryant Middle School gym Monday night. In fact, it was downright rugged as the two teams got after it on defense.

Points were at a premium and that’s understating it.

In the end, the Mounties held on for an 11-7 win despite scoring just 3 points in the second half.

It was a frustrating night for the Lady Hornets, who finished with just one field goal — a second-quarter jump shot by Riley Hill. Adding to the vexation was the fact that they converted just 5 of 11 free throws with the misses including the front ends of bonus opportunities three times.

In fact, trailing 11-4 going into the last three minutes, the Lady Hornets hit 3 of 7 shots from the line while they were holding the Mounties scoreless over the final 5:40.

“I think the first team that got to double digits should’ve automatically won,” quipped Bryant coach Nathan Castaldi. “We struggled offensively. They played good defense. Give them credit but we rushed a lot of shots and kind of settled for outside shots instead of trying to get in and get what we’ve really worked on.”

Regarding his own team’s defense, the coach added, “We always say, ‘Give ourselves an opportunity to win in the fourth quarter.’ That’s what we want and we did that. Even though we only scored seven points, we’re sitting there with a chance to walk out with a win because of our defense. Our effort was very, very good.”

Kennedy Harris, who continued to rebound well, produced the lone points of the first quarter for the Lady Hornets with a pair of free throws. Mount led 5-2 with Elizabeth Allgood scoring 4 points, then Hill canned her jumper midway through the second period to make it a one-point game.

It stayed that way until Mount’s Valerie Kauffman beat the buzzer with a 3-pointer, which, as it turned out, was a huge basket as the two teams wound up scoring just one point in the third quarter combined. And that came on a free throw by the Mounties’ Kara Rogers with :12 left. 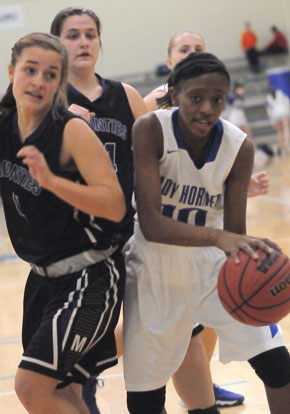 A basket by Kauffman to open the fourth quarter gave Mount the 11-4 lead. It was the last of the Mounties’ scoring in the game.

And the Lady Hornets didn’t get their first point of the second half until, with 3:01 to go, Deja Rayford hit a free throw. Two empty trips to the line followed inside the final two minutes before Harris added a free throw with :56.3 to go.

After forcing a turnover, the Lady Hornets pounded the glass for three shots before Alyssa Kubiako was fouled with :18.8 to go. She got one shot to go but, because they’d only fouled four times in the second half to that point, the Lady Hornets had to foul repeatedly to get the Mounties to the line in the bonus. The seventh foul, which produced the initial one-and-one came with :06.3 showing. Even with Allgood’s miss, the Lady Hornets didn’t have enough time to get a decent shot.

Bryant takes a break for Christmas now before returning to action on Friday, Dec. 27, against Hot Springs in the annual Kameron Hale Invitational Tournament at Lake Hamilton. Tip-off is scheduled for 3 p.m. They’ll play there Saturday and Monday as well.

Board decides on firm to work on plans for new BHS cafeteria
Rose, Harding Academy pull away late vs. Lady Hornets