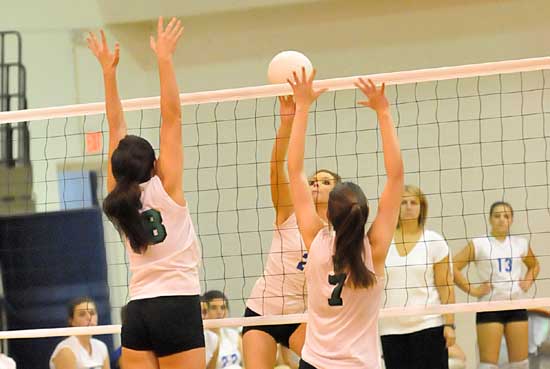 For quite a while, it looked like it was just the Van Buren Lady Pointers’ night. In their battle for third place in the[more] 7A/6A-Central Conference behind co-leaders Conway and North Little Rock, the Bryant Lady Hornets were struggling. They just couldn’t get a roll going. It seemed like half their attacks were being blocked and there were an uncharacteristic number of service errors. 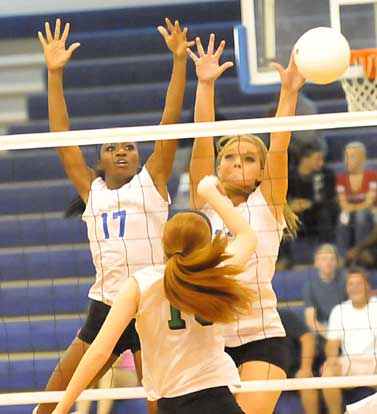 Van Buren led the entire first game of the match at the Hornets Nest then, after Bryant established a lead in the second, stormed back in the late going to move a game away from a sweep.

It was simply one of the most compelling victories for the Lady Hornets in memory, and it came against a tough opponent.

Now 4-2 in league play, Bryant is set to host North Little Rock in another showdown on Thursday with a chance to pull into a second-place tie with a win after the Lady Charging Wildcats lost to Conway Tuesday.

“We needed that,” acknowledged Lady Hornets coach Beth Solomon. “We needed a big win, I feel like, to push us up to that next level.

“I told the girls, starting with that third game, that is the most consistently they have played yet this season,” she added. “And that’s what ultimately won it for them. They played consistently. They played together. We kept reminding them that they’re out there playing for each other.

“I think it’s really going to boost us,” the coach asserted. “I think it’s going to boost morale. I don’t think the girls realized that they are this good. I don’t think that they knew that. And I think they needed tonight to see that, number one, they are this good and, number two, that they can play that consistently for an entire match. They can do it. And they worked their tails off tonight. If they work that hard they can do it every night.”

“Brianna White stepped it up big time tonight,” Solomon acknowledged. “Our middles decided they were going to get mad and they were going to start playing. And I’m glad that they did because they got to see that they can get every block if they’re doing what they’re supposed to be doing and they get in the right frame of mind. We’re going to need our blocks Thursday night against North Little Rock.”

McKenzie Rice finished with 14 kills. Anderson and Brooke Howell added eight each and White had six.

Lauren Reed and Taylor West both reached double figures in assists. Reed had 22 and West 11. Reed had a whopping 23 good serve-receives as well. McKenzie Rice led with 18 digs. Reed and Hannah Rice added nine each.

“Our passes were great tonight,” Solomon commented. “Lauren Reed had an outstanding game tonight. Taylor West, when we moved her from setter to passing, she did great for us.”

That move proved to be key.

“We decided in third game to go with a 5-1 and see if we could change things up a little bit and it worked,” noted the coach.

The final game of the match was the whole thing in microcosm. Van Buren appeared to be regaining the momentum they’d lost after the second game, rolling out to a 6-0 lead, no small thing in a game to 15.

During a timeout with the score 4-0, Solomon could be overheard forcefully telling her team, “This game is not over.”

She was right. A kill by McKenzie Rice ended Van Buren’s run and, with Anderson serving, Bryant got back into it, starting with her ace. It got to be 4-6 before the Lady Pointers got a sideout.

And they led 9-5 before a service error cost them. McKenzie Rice rotated into service and Bryant pulled even behind a solo block by White and a service ace.

It was then a desperately contested game, tied at 10, 11 and 12 before a net serve by Van Buren put Bryant on top to stay. With Howell serving, Anderson got a block that made it 14-12 then a hitting error provided match point.

The match was tightly contested throughout. Even in the first game in which Bryant never led, Van Buren couldn’t put together an extended run after breaking out to a 3-0 lead. Neither could the Lady Hornets.

“We had a rough couple of games serving,” Solomon allowed. “We tell them all the time, your serve is the one thing you can control, that nobody else has any impact on. It’s all you. Most of it is focus when they’re not getting it done or they’re not hitting the ball hard enough or they’re not confident in the spot we’re asking them to serve to, that kind of thing.” 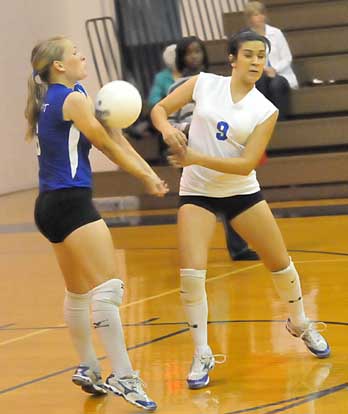 The Lady Hornets made a bid at a comeback late in the first game. Trailing 18-24, they picked up a sideout on a service error by Van Buren then McKenzie Rice served up an ace. They appeared to have another point on a double hit but, upon appeal by the Lady Pointers, the point was nullified and it remained 20-24. A block by White made it 21-24 when it might’ve been 22-24. But a service error ended the game.

In the second set, the Lady Pointers broke out to a 5-1 lead but on a pair of kills by Howell and another by Peyton Thacker, the Lady Hornets surged to a 6-5 edge. Anderson and Thacker had kills during a stretch in which the advantage grew to 12-8.

Extended volleys marked the game but the Lady Hornets maintained the lead until Van Buren pulled even at 20. Bryant led 22-21 on a kill by Anderson but Van Buren surged to win the game with help from a series of hitting errors by the Lady Hornets.

The opening salvo by Bryant in the third game including three of Anderson’s aces. White scored off another block and both Hannah and McKenzie Rice knocked down kills. Van Buren rallied to within 9-11 but, after a timeout by Solomon, the Lady Hornets got back on track with a kill from White and, in rapid succession, Anderson, Howell and McKenzie Rice.

The lead was 21-16 after another kill by McKenzie Rice and a block by White. Van Buren pulled within 19-22 but, after another timeout, Bryant closed out the win. A kill by Howell forced the sideout and, with West serving, Anderson got a block to set up game-point which came on another block with Anderson and Howell combining.

The intense fourth game was close the whole way. Neither team led by more than two points until a kill by Howell and a block by Anderson made it 20-17. Anderson and Hannah Rice combined on yet another block to push the lead to 4 points before a sideout.

But a hitting error cost Van Buren and, with Anderson serving, White and McKenzie Rice combined on a scoring block then White followed with a solo stuff to set up game point. Another hitting error by the suddenly frustrated Lady Pointers provided the winning point, setting up the tiebreaker.