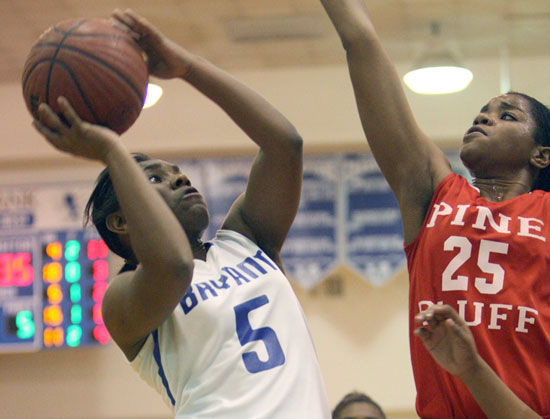 Seniors Dezerea Duckworth and Peyton Weaver return to the starting lineup as the Bryant Lady Hornets get set to open the 2013-14 season on Thursday when they host the Vilonia Lady Eagles. They’ll be participating in a scrimmage tonight at the first Tip-Off Night event at Bryant Middle School gym.

“We’re excited,” declared Lady Hornets coach Brad Mattews. “Our kids have been working really hard. I think we’ve got really good chemistry. I think we’ve got good leadership and a sophomore class that’s come in and has really been great, hard-working kids.

“I think we’ve improved greatly since last spring,” he noted. “We’ve improved through the summer. Now we’re at the start of the season and hopefully we’ll continue to improve as the season goes on.”

Duckworth, a two-time all-conference performer, joins Weaver, Erica Smith and Aubree Allen as the seniors on the squad. Allen has battled back to get cleared to play after missing her junior year with a knee injury.

“We look to Dezerea for so much, for leadership, rebounds, assists, scoring,” Matthews said. “Peyton had a really good spring and summer. She’s got an all-around game. She’s a good passer. Erica’s gotten better since last season. I think she feels more and more comfortable. Hopefully, as the games go along and the more comfortable she gets, the more she’ll produce.

“I think if we can keep Aubree healthy, she can make great contributions for us this year,” he added. “She can score, she can rebound, she’s versatile. She can step out on the floor or she can post up.”

The juniors included Jakeria Otey, Brittany Earls, Madeleine Baxter, Jayla Anderson and Rachel Barber. Anderson played quite a bit off the bench as a sophomore and Baxter contributed as well. Otey sat out her sophomore season.

“I think she’s got some ability,” Matthews said of Otey. “I think if she realizes her ability, gets comfortable and gets more confident, she can really help.

“Jayla gives us great energy on both ends,” he added. “She makes plays that help us win.”

“They were role players in ninth grade last year but we think we’ve got some kids that can be good high school players,” Matthews stated. “Rachel Miller, a post player that’s probably six-foot, she’s getting more comfortable every day and more aware of who she is as a player. Annie Patton is making tremendous strides and Carolyn Reeves — we’ve just got a bunch of sophomores who can — with confidence — I think we’ve got some who will be able to contribute varsity minutes.

As for the team as a whole, the coach said, “I think we’ll be better defensively. I think our kids have really bought into being tough, being fundamentally sound on defense. As we watch tape, as we scrimmage, our defense is better. Obviously, it’ll need to improve as the season goes on but it’s a starting point.

“We’ve got a solid six or seven then we’ve got three or four or five kids,” he related. “All of them won’t get to play but there will be two or three that will establish themselves as the kids that get minutes.

“We’ve got the benefit game against Vilonia then we go to Mount (St. Mary Academy) which is a tough place to play, then we’ve got two tournaments (at Central Arkansas Christian and Cabot). Hopefully, we’ll be able to use those eight games or so to see where we are.

“We’ve got some solid kids, a great group of kids,” Matthews concluded. “I’ve enjoyed practice more this year than I have in many years. I think that’s a positive. Our kids are working hard and doing what we’re asking them to do. They’re taking coaching. When you get a group that starts there, there’s great room for growth and getting better as we move forward.”

Senior Profile: Jarron Wade
Hornets working to make up for lack of size as season approaches