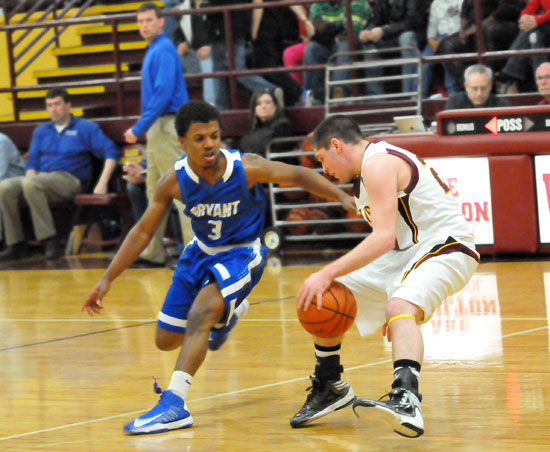 Senior starters C.J. Rainey and Greyson Giles lead the Bryant Hornets into the 2013-14 basketball season as it gets underway on Thursday at home against Vilonia this Thursday. An Arkansas Activities Association benefit game will follow Tuesday’s preseason scrimmage as part of the first Tip-off Night at Bryant Middle School gym on Tuesday. 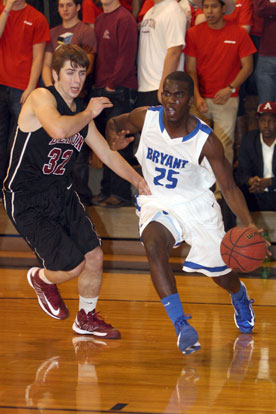 Grayson Giles (25) drives to the hoop. (Photo by Rick Nation)

Along with Rainey and Giles, the seniors on the team include Caleb Strain, who has battled back from severe injuries to return to the court, along with Austin Hammonds, Cedarrian Crosby, and Rickey Buchanan.

Along with Strain, Crosby has probably had the most varsity playing time in the group.

There are a few players that may be added to the roster once the football team’s season is completed including junior Ryan Hall, who played varsity minutes last season when the team reached the quarterfinals of the Class 7A State Tournament.

“The kids are ready to go,” acknowledged Hornets coach Mike Abrahamson. “They’re tired of practicing against each other, as always. Coaches would always like more time.

“We’re small but, hopefully, we’re scrappy,” he related. “Hopefully, we can do some things to negate that disadvantage because it’s going to be one, I would assume, every night. Our second issue is depth, which could be a strength and it can be later. We’ve got two ninth graders (Duckworth and Martin) and two 10th graders (Hunt and Croom) that we’re hoping will keep progressing, can play major minutes for us and be consistent contributors; consistency being the key there. That’s what we’re lacking currently although I think we’re making progress.

“And there are other guys that have the potential to help us,” the coach submitted.

Of his returning players, Abrahamson said, “C.J. and Greyson and Cedarrian, we think are going to have a good year. Rickey Buchanan has come a long way and will play a lot of minutes for us. He’ll make a difference, especially defensively. We’ve got Caleb back.

“Those guys are very comfortable with what they’re doing in the sense that, when they step on the court, whatever I ask them to do they’re ready to execute it. They don’t have to think. They’re not paralyzed by that thought process, which some of the younger kids — we’re still trying to get to that point, which is typical.

The Hornets’ official opener will be Tuesday, Nov. 26, at North Pulaski.

“I like our plan, what we’re trying to do,” Abrahamson related. “It’s not easy. It takes effort. It takes giving of oneself for the betterment of the team. We’ve got to get to the point where it works for us consistently because we’re not going to be able to slug it out with other teams.”