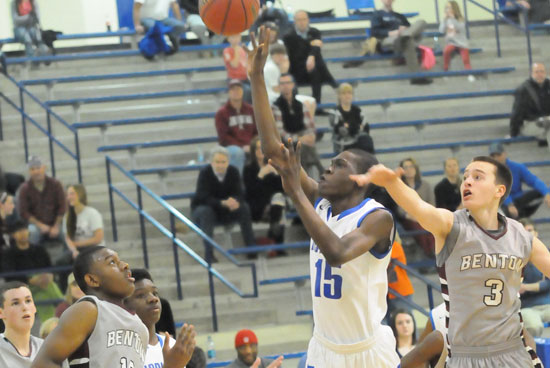 The Bryant Hornets freshman team opened up their game against the Benton Panthers frosh on Thursday night with a 9-1 burst then never trailed on the way to a 35-28 win in Central Arkansas Junior High Conference play.

Jonathan Allen fires up a jumper. (Photo by Kevin Nagle)

It was the third time this season that the Hornets and Panthers have met with each winning once. The Hornets got the rubber match and the most important of the three, the one that counted in conference play. The Hornets improved to 12-5 overall and 2-0 in the league going into a trip to Lake Hamilton on Monday, Jan. 27.

Benton whittled the Hornets’ lead to 5 late in each half but could get no closer. Point guard Calvin Allen scored 6 of his team-high 10 points in the fourth quarter and eight Hornets scored in all. Marvin Moody added 6 with Brandon Harris, Caylin Allen and Jonathan Allen each pitching in with 5.

For Benton, inside strongman Fred Harris got 19 to go with 10 rebounds but no other Panther had more than Weston Riddick’s 4.

After a timeout, Benton went to Fred Harris inside for a basket but, moments later, Kyle Sahr came up with a steal of the Hornets. Caylin Allen missed a 3 but rebounded and drove to the rim where he was fouled by Fred Harris who, apparently said the wrong thing and was hit with a technical. Given four shots at the line, Caylin Allen converted three times to bump it to 12-3.

Neither team scored in the final two minutes of the quarter.

“I’m glad we set a tone early there,” commented Bryant coach Tyler Posey. “We came out really intense and focused. That was a glimpse of what we’ve been doing in practice. I really think that first quarter was good for us. When we start putting those kind of quarters, stringing them together, that’s when we’re going to get dangerous.

“We forced some turnovers and got a couple of easy shots,” he noted. “Our offense kind of sputtered a little bit after that but we got back on track.” 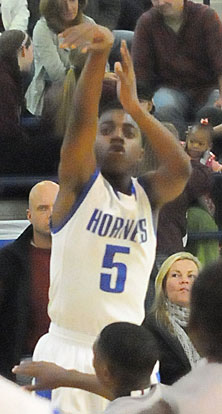 Brandon Harris scored all 5 of his points in the first quarter for Bryant. (Photo by Kevin Nagle)

The Hornets got a lift off the bench from Jonathan Allen in the second quarter. Riddick fed Fred Harris for a basket to open the period but Jonathan Allen grabbed the carom off a Benton miss with 3:27 left in the half and was fouled. He converted a free throw.

After Fred Harris knocked down a pair from the line, Jonathan Allen took a pass from John Winston and drained a jumper to answer. Fred Harris scored again only to Kaleb Turner respond for Bryant.

Trailing 17-9, the Panthers cut it to 5 with Jai Peters’ driving layup and a free throw by Brandon Hunter. But Calvin Allen’s driving jumper in the final minute set the 19-12 halftime lead.

When the third quarter commenced, the Hornets opened with a 6-0 spree. Moody canned a baseline jumper off a drive and dish by Caylin Allen. After a Panthers turnover, Calvin Allen drove for a layup. Caylin Allen made a steal and Harris went to the line where he knocked down both shots to produce the Hornets’ first double-digit lead, 23-12, just a minute into the second half.

Benton wound up going the whole third quarter without a field goal but kept up by converting 6 of 8 free throws. A free throw by Hunter Handly and a driving layup by Jonathan Allen had the Hornets up by 10 before Fred Harris’ free throws in the final minute made it 26-18 going into the fourth quarter.

The Panthers made a bid at a run when Fred Harris hit an 8-footer to start the fourth quarter. Calvin Allen missed at the other end but, after Peters collected the rebound, Allen stole the ball under the basket and got a shot up and in as he was fouled. The three-point play re-extended the lead to 9.

Riddick posted up for a basket with 4:56 left but then the Hornets started spreading the floor and running clock. Winston hit a free throw and, after Fred Harris scored, Calvin Allen added one from the line.

Riddick was fouled rebounding the second shot and went to the other end to knock down a pair. So, with 1:57 left, the Panthers were within 5 and 31-26.

And they had a chance to get closer when Preston Stone made a steal. But Winston’s theft foiled that chance and Calvin Allen converted twice at the line with 1:36 showing.

In the final minute, Caylin Allen and Moody hit free throws around a layup by Fred Harris to close it out.