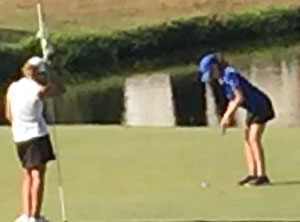 Bryant senior Katy Edwards prepares to putt during the second round of the Class 7A State golf tournament at The Greens at North Hills Wednesday.

SHERWOOD — On the second day of a 36-hole golf tournament, it takes a certain kind of stamina and skill to improve a score. That’s why hats should be tipped to Bentonville’s Kate Robertson, who followed up a 75 on the first day with a round of 72 on the second day to capture the championship of the Class 7A State girls tournament at The Greens at North Hills on Wednesday.

Few others improved on their scores including Bryant senior Katy Edwards who advanced to the second round with a 100 on Tuesday but wound up at 126 the second day.

Freshman Brooklyn Waller shot 132 on the first day and didn’t make the cut while the third member of the Bryant Lady Hornets team, Maddie Stephens was unable to play due to an injury that has sidelined her for almost three weeks.

“Katy played well day one and was very excited to make it to day two of the tournament,” said Bryant coach Steve Griffith. “Day two did not go well but I’m proud that she was able to finish her high school career by making both days of the tournament.

“Thanks to these girls for their efforts this year,” he added. “Good luck to Katy next year and we’re looking forward to Maddie and Brooklyn being back and improving next year.”

Conway, led by individual runner-up Casey Otts (72-77 149) won the team title with a score of 499, edging Bentonville by six strokes.

The Bryant boys will compete in the 7A State tourney Oct. 3-5 at Centennial Valley Country Club in Conway.