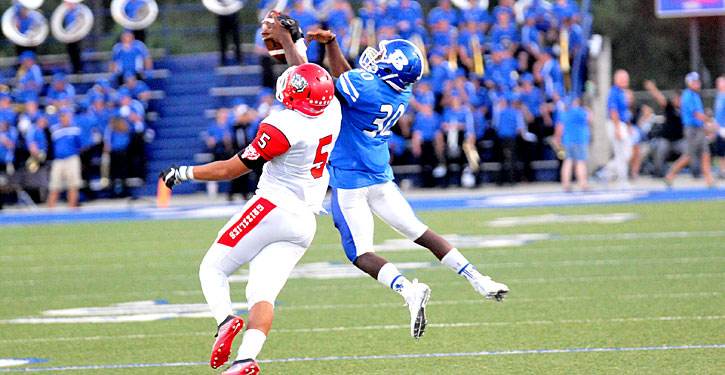 So what do you do when adversity hits? Do you answer it with greater determination? Do you respond by working even harder? Focusing even more?

Or do you let the frustration drag you down? Do you let go of the rope?

The answers for those questions for the Bryant Hornets, as they prepared during a short week for the Little Rock Catholic Rockets, were that they doubled up practice, working out early in the morning and in the afternoon.

The game, usually played on Friday, was moved up to Thursday due to the Arkansas Razorbacks playing Alcorn State at War Memorial Stadium on Saturday.

The Hornets are 2-2 coming into the game tonight. But it apparently seems to many fans that it’s worse than that, mainly because the team has only been able to score 44 points in those four games.

Of course, some of the Hornets’ struggles have been because of the defenses the team has faced. Still, it’s not what the fans, players and coaches hoped for.

The Rockets, on the other hand, have scored over 30 points in three of their four games. But their defense has surrendered 48 points to Sylvan Hills, 69 to Jonesboro and 35 to Cabot in their three losses.

So tonight, the question will be, will the Bryant offense break out or will the Catholic defense come around? Both see it as an opportunity to turn the trends around along with their season; a start, perhaps, to a run to the playoffs.

At the same time, the strengths of the teams, the Hornets’ defense and the Rockets’ offense will be face to face.

“We will find a way to move the ball and score points,” declared Bryant’s head coach Buck James.

The Hornets actually produced 239 yards of offense against Fort Smith Northside last Friday, while holding the Grizzlies to 168, including just 39 yards on 31 rushes.

But, for Bryant, most of the yardage came between the 20’s. Red zone offense figured to be a point of emphasis this week in practice, as well as special teams, which faltered last week.

While they were faced with a fast, active defense in Northside, the Hornets appear to be headed into a battle with a more aggressive, risk-taking defense that’s designed to create bad plays while risking some big ones in return and hoping to keep them to a minimum.

It’ll be interesting to see if the Rockets dial that back a bit against a struggling offense like Bryant’s, play them a little more straight up.

Offensively, the Rockets have a stout offensive line, a solid passer in quarterback Taylor Price and big-play running back in Samy Johnson, who was at Little Rock Christian during James’ time there.

Johnson rushed for over 300 yards in the Rockets’ 69-34 loss to Jonesboro.

But Bryant’s defense has held the opposition to an average of less than 100 yards rushing per game so far this season. It’s a stout, veteran group that has been put under the gun defending short fields a few too many times this season.

That’s something the Bryant offense plans to change tonight.

Discouraged fans need only be reminded of the 2013 season for Bryant. The Hornets started the season with a 2-3 record but turned it around to win five in a row. Admittedly, that was against a conference of 6A schools and these Hornets are facing a rugged all-7A league.

But a win tonight could build up the kind of confidence and momentum to produce a similar second-half run.