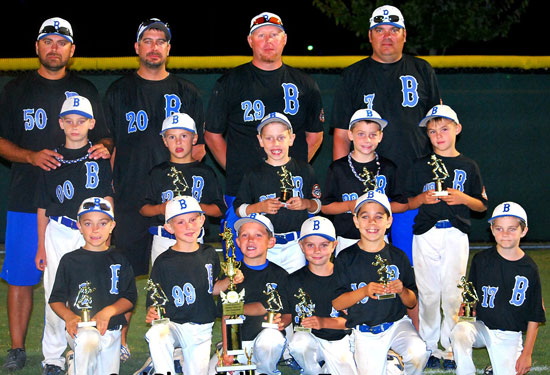 CONWAY — With four wins in two days, a Bryant 8-year-old baseball team reached the championship of the USSSA Fall State pitching machine tournament last weekend before winding up the runner-up team after an 18-5 loss to the Arkansas Legends of Cabot. 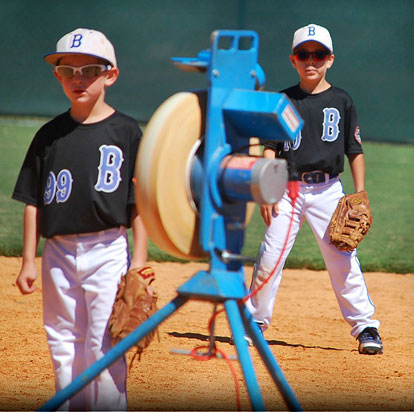 Both teams piled up five runs in the first inning but when Bryant hit for six in the second, the Prospects came up short in the home second. Five more in the third put Bryant in the driver’s seat.

Penfield and Blacklaw opened the game with back-to-back doubles to break the ice. With one out, Horn and Johnson singled to load the bases for Stovall who cracked a single to right to plate two. With two down, Crawford’s double made it 5-0. 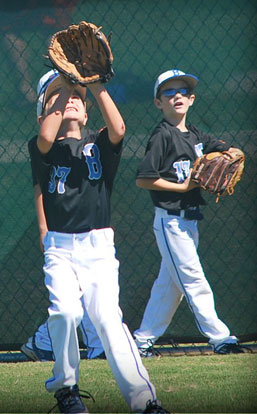 After the Prospects tied it in the bottom of the inning, Bryant’s big inning began as the first had, with Penfield belting a double. With one out, Kemp singled the Horn’s double chased both of them home to put Bryant ahead to stay. And, after Johnson beat out an infield hit, Stovall singled in a run. That set the stage for Brower’s inside-the-park home run, which made it 11-5.

The Prospects got two of those runs back in the bottom of the second but Bryant extended the lead further in the top of the third. Singles by Blacklaw and Kemp set the table. Horn doubled in a run and Johnson singled to drive in two. Stovall bounced into a force but Brower singled him to third and he scored when Crawford bounced into a fielder’s choice. Hughes capped off the onslaught with an RBI single.

Penfield added an inside-the-park homer in the fourth. Blacklaw, Kemp and Horn singled and Johnson picked up another RBI when he grounded to second. Horn was forced out on the play but Stovall followed with a single to complete the scoring.

Penfield and Blacklaw each had four hits, and a seven-run third broke open a 5-5 game.

Bryant took a 3-0 lead in the top of the first. Penfield doubled, Blacklaw singled and Kemp drove in the first run with a base hit to center. Horn knocked in Blacklaw and Johnson picked up an RBI with a grounder to short.

In the second, Hughes singled but was forced at second by Motes. Penfield doubled and Blacklaw and Kemp followed up with RBI singles to make it 5-0.

After the Legends broke out for five to tie in the bottom of the second, Bryant’s breakout inning began with a single by Stovall and a double by Crawford. Hughes knocked in a run and Motes drove in two before Penfield cleared the bases with a triple. Blacklaw doubled him in and Kemp came through with an RBI single. With two down, Johnson, Stovall and Brower ripped consecutive singles to make it 12-5. 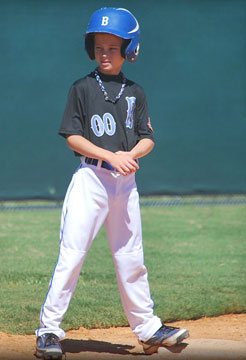 The Legends failed to score in the bottom of the inning and Bryant continued to add on. In the fourth, Crawford singled but was forced out on a grounder by Hughes. With two down, Penfield doubled in a run. He scored moments later on Blacklaw’s base hit.

After the Legends pushed a run across in the home fourth, Horn and Johnson singled to start the fifth. Stovall was issued an intentional walk to load the bases but Brower and Crawford came through with RBI singles.

Trailing 16-6, the Legends rallied for four runs in the bottom of the fifth, too little too late.

A seven-run first put Bryant in control against Southern Tees on Sunday. It stayed 7-0 until the third when Southern Tees picked up its two runs. But, in the bottom of the inning, Bryant put it out of reach with five more.

The big first was instigated by Catton’s infield hit. Penfield followed with another and Kemp singled in the first run. Horn’s double plated Penfield then Johnson drove in two with another double. Blacklaw and Stovall each belted RBI two-baggers before Brower capped off the inning with an RBI single.

The third-inning uprising was ignited by Penfield’s triple with one out. He scored on an error before Kemp singled. Base hits by Horn and Johnson followed with the latter hit knocking in a pair. Stovall and Crawford each knocked in a run with a base hit to make it 12-2. 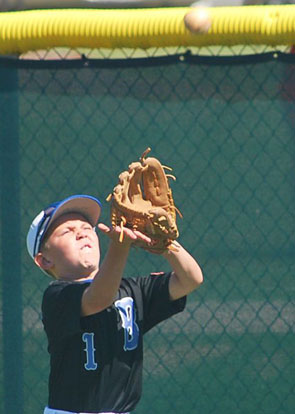 Trailing 10-7 going into the bottom of the fifth, Bryant rallied for four runs and the win. Penfield started the comeback with a double. He scored on Kemp’s single to center. Horn and Johnson ripped back-to-back doubles to tie the game and, after Blacklaw was walked intentionally, Stovall drove in the game-winning run.

Batesville had taken a 5-0 lead in the top of the first and, after Bryant scored three in the home half, the Bad Boys tacked on two in the second and one in the third to make it 8-3.

Bryant whittled two runs off the margin in the third then two more in the fourth but Batesville’s two-run fifth to put themselves in position to win it.

Down 5-0, Bryant’s three-run home first began with singles by Catton, Penfield and Kemp. Horn and Johnson doubled and Blacklaw singled to make it 5-3.

After it got to be an 8-3 deficit, the two-run third began with singles by Motes and Penfield with two down, Horn came through with a two-run single.

In the home fourth, Stovall doubled and scored on Crawford’s single to center. Hughes and Motes had base hits to chase home Motes to make it 8-7.

Batesville answered in the top of the fifth but Bryant had the final word.

The Legends built an 11-0 lead going into the bottom of the second and Bryant was unable to dig out of that hole.

In the home second, consecutive singles by Blacklaw, Stovall and Brower broke the goose egg for Bryant. Crawford grounded into a force out but picked up an RBI then so did Hughes to make it 11-3.

Bryant scored a run in the bottom of the third on a double by Penfield and a single by Kemp.

After the Legends blew the game up with a seven-run top of the fifth, Bryant added a final run on an RBI single by Kemp. 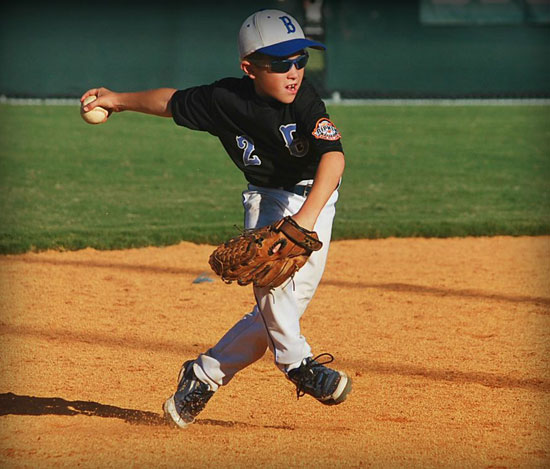