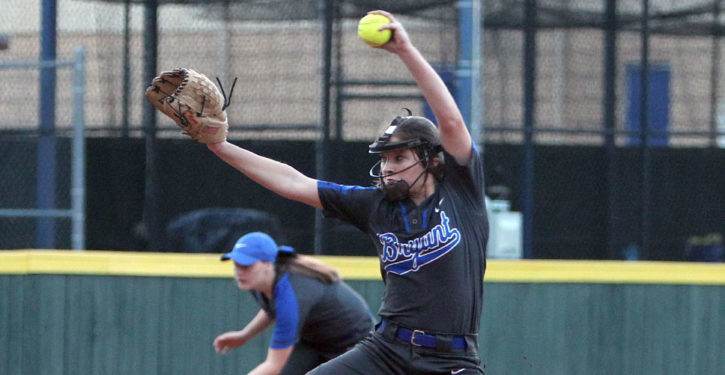 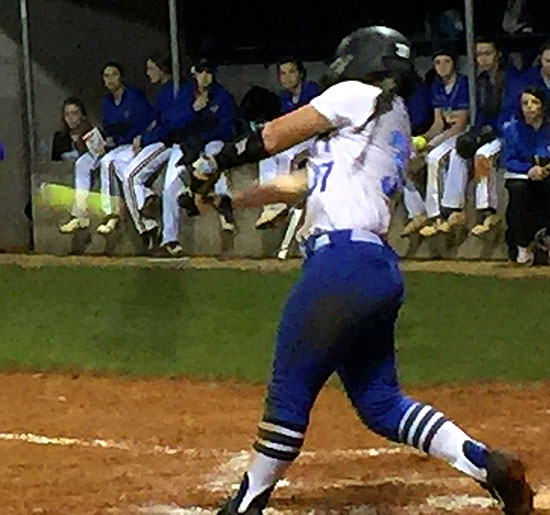 A parking-lot shot deep into the dark, damp night crushed by Sarah Evans with two out in the bottom of the seventh inning made the Bryant Lady Hornets a walk-off winner over the defending 6A State champion, Sheridan Lady Jackets in a 9-8 slugfest Thursday night at the Lady Hornets’ Yard.

It was Bryant’s fourth homer of the night — the second by Evans — and the seventh of the game between the two teams, who figure to be among the best in the state this season.

Evans might not have had a chance to win it if not for a blast by Madison Lyles to open the bottom of the seventh, tying the game 8-8.

Evans and Meagan Chism ripped back-to-back homers for the Lady Hornets in the fifth. For Sheridan, Maeson Grace drilled a solo shot in the first then Kendall Ellison cracked a sole bomb in the second. Nicole Tompkins went yard to lead off the top of the fourth.

“All three pitchers did well, were hitting their spots and everything but we just happened to have a few timely hits,” she added.

Sheridan’s pitcher Regan Martin, who was the Class 6A State Tournament MVP last year, got into some trouble in the second inning when she lost her control a bit, walking three, each of which scored. But once she got out of that, she had retired seven of the next eight batters before Evans’ first jack.

“She was throwing to their weak spots,” said Dreher, adding of her batters, “They just figured out how to hit it anyway. She did a good job pitching.”

Raven Loveless started for Bryant and her effort was undermined by some fielding miscues in a three-run third. Another error and a two-out double in the fourth brought a change as freshman Gianni Hulett came on to pitch.

She got a strikeout to end the threat in the fourth but surrendered two runs on one hit in the fifth before striking out the side to start a stretch in which she retired the last night Sheridan batters in a row, giving her teammates a chance to rally from an 8-5 deficit.

“It is a big win,” Dreher said. “They know who Sheridan is and they know the tradition they have.

“I don’t think they really understand how good they are,” she added regarding her team. “So, if anything, maybe this will put it in perspective for them. They do have a lot of potential.”

The nine runs were the most surrendered by a Lady Jackets team since a 9-5 loss to Benton Harmony Grove on April 6, 2015. The most they gave up during their championship season of 2016 was seven in an extra inning loss to Benton, the team they wound up defeating in the State title game, 6-0.

Sheridan grabbed a 2-0 lead on the solo homers by Grace in the first and Ellison in the second. Those were the only two batters to reach in those two frames against Loveless.

In the bottom of the second, Martin issued a walk to Evans, who was on base four times. Chism beat out an infield hit then Brooklyn Trammell worked a walk to load the bags. Maddie Stephens swatted a singled to left to drive in two, tying the game. Seeing a chance to take second as Sheridan relayed from the outfield and looked home, Stephens got thrown out trying to get back into first.

But, on the very next pitch, Loveless drove a liner down the right-field line for a triple to drive in Trammell. Moments later, Regan Ray slapped a grounder to deep short and beat it out for an RBI single to make it 4-2.

With one out in the top of the third, Sheridan’s Maggie Hicks cracked a shot off the wall for a triple. She scored when Kylee Williams reached on an error. After a wild pitch, Williamson scored when Grace’s grounder resulted in a rushed low throw that couldn’t be dug out at first.

Grace wound up at second then took third on an errant pickoff throw, scoring a pitch later on a groundout by Charlie Names.

That put the Lady Jackets back in the lead, 5-4.

“That’s something we’re going to have to overcome because we can’t count on our bats being hot every single game,” Dreher said of the errors. “We’ve got to be tight on defense so, hopefully, that will come.”

The Lady Hornets tied it in the third when Macey Jaramillo walked, advanced to second on a wild pitch and scored when Evans lined a gapper to left-center for an RBI double.

Tompkins’ lead-off tater down the line in right put Sheridan back on top. Loveless retired the next two but another error kept the inning going. Hicks doubled to put runners at second and third, and produced a pitching change.

The Lady Hornets didn’t have an answer right away and Sheridan tacked on two runs in the fifth. In game in which every batter that walked for either team wound up scoring, Grace and Names drew free passes to start the top of the fifth. Tobi Finley then pushed a bunt between first and second for a two-run single to make it 8-5.

The hard-throwing Hulett hit her stride after that with a devastating change-up for a strikeout pitch on a couple of occasions.

Meanwhile, Martin was cruising until, with two down in the home fifth, Evans and Chism unloaded to cut the lead to 8-7.

Neither team scored in the sixth then Hulett set down the Lady Jackets in the top of the seventh.

Lyles worked the count to 3-1 at the start of the home seventh then ripped a clutch round-tripper to tie the game in dramatic fashion.

Hulett followed with a drive down the right-field line. But when she tried to stretch it to a double, she was thrown out at second on a sparkling play by Tompkins, the Sheridan right-fielder. And when Jaramillo just got under a pitch and skied to right, it started to look like extra innings.

Bryant improved to 3-0 on the season. Sheridan fell to 2-1, snapping a seven-game winning streak that included their unbeaten run in the 2016 State tourney.

Neither team will have much time to think about it, however, as they begin play in the annual Drew Melton “Forever Young” Tournament on Friday. It’s a double-elimination tourney over two days that includes 16 strong teams including last year’s Class 7A finalists, Bentonville and North Little Rock.

Sheridan takes on Nashville at 3:30 p.m., and Bryant opens with Vilonia at 5.