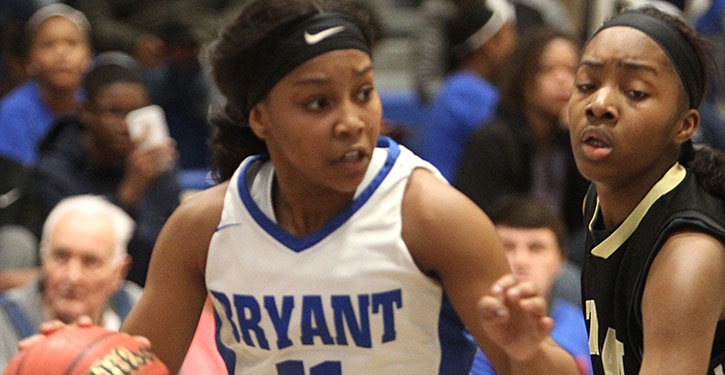 Everybody back and better as Lady Hornets host Maumelle tonight

Talent, depth and experience — those are three things that, together, have rarely in recent years been combined to describe the Bryant Lady Hornets basketball team.

But, in 2018-19, it certainly describes them appropriately.

The Lady Hornets host Maumelle in a preseason benefit game tonight at 6 then officially open the regular-season on Tuesday, Nov. 13, against the host team at the Lake Hamilton Classic.

Head coach Brad Matthews deployed a team last season that was heavily-laden with sophomores and included all underclassmen. So, all-state point guard Tierra Trotter returns along with guards Kalia Walker, India Atkins, Lexie Taylor and forwards Celena Martin, Robyn Gordon, Ivory Russ and McKeycia Baker, who all played significant roles last season. Add to that, improved play from Mady Scifres, Sierra Trotter and Jada Deaton and the return of McKenzie Muse and Allison Steen — well, you see what I mean.

“We definitely are experienced,” acknowledged Matthews, who will be assisted this year by Joanna Scott. “Going through the league and that schedule we went through last year helped us. We played some of our better ball toward the end of the conference.”

The Lady Hornets finished 11-16 overall in 2017-18, 6-8 in the talent-rich Central Conference — last year, in 7A, this year, called 6A — and, with three wins in four games in early February, secured a spot in the State tournament.

“To have everybody back, I think now, you can talk about it but until people have experienced the league and the gauntlet we go through, there’s no replacement for that experience,” Matthews continued. “So, having everybody back, McKenzie is healthy again. It’ll be good to see her get out there and play and produce like we know she can.

“We’ve got five or six guards we feel comfortable with, five or six posts we feel comfortable with,” he related. “I think our kids will have a chance to kind of prove who plays and earn their playing time based on practice performance and game performance. Competition breeds daily improvement. Hopefully, as we get into the season, we’ll see that pay off.

The offseason was dedicated, the coach said, to improving offensively for a team that scored as many as 72 in a game to 19 in another.

“Obviously, every coach looks back at the end of the year and sees where they were underachieving,” said Matthews. “I thought, offensively, last year we just couldn’t score at a rate that you need to be able to be competitive and to win in our league. We really committed all spring, summer and fall to really get better offensively, individual shooting, individual finishing around the rim. I think that really is where we need to see the best leap.

“You know, three, four or five teams in our league have multiple college players and those kinds of teams are going to score the ball,” he explained. “So, we really committed to — you know, defending is important, rebounding is important, taking care of the ball is important but, a lot of games, we would just go through some dry spells and a 4- or 5-point game would turn into a 15-point game against those elite teams. That was one area where we really looked at in terms of making a plan, a different plan than we’ve been using.

“And a lot of those inconsistencies were due to maturity, being able to handle every possession as important,” the coach stated. “When we were able to put together five, six, seven possessions in a row that were good, we could play with anybody in our league. The consistency possession-by-possession is where — we got better at it as the season went on, but I think that’s where we need to see the most growth once games start.

“We’ve seen it in practice,” he noted. “Our practices this fall are much, much more improved than they were last fall so, hopefully, that’s a promising point.”

Individually, Matthews expounded on the 6-2 Muse, who missed almost the entire season last year due to injury.

Steen, a 5-11 senior, returns after sitting out last season. She had played well at times as a sophomore.

“She can do things physically that few kids we’ve had here can do,” Matthews mentioned. “Hopefully, she’ll be connected and playing well.

“We have some height,” he said. “We can get three kids out there that are right at six-foot if not over and that’s something we haven’t had since I’ve been here.”

“India had a really good spring and summer,” he said as an example. “We’ve had a really good fall as a team. India really led us in terms of really making a commitment to her getting better skill-wise. She played so hard. She’s such a great on-ball defender. I think her offensive ability has really gone to the next level. And she’s still working hard to take it higher.

Bryant will play on Thursday, Nov. 15, against Greenwood at Lake Hamilton then wrap up the Classic against Kirby on Saturday at noon. Their first home game won’t be until they open conference play on Jan. 4, 2019 against Fort Smith Northside, the defending State tournament runner-up and league tri-champion.