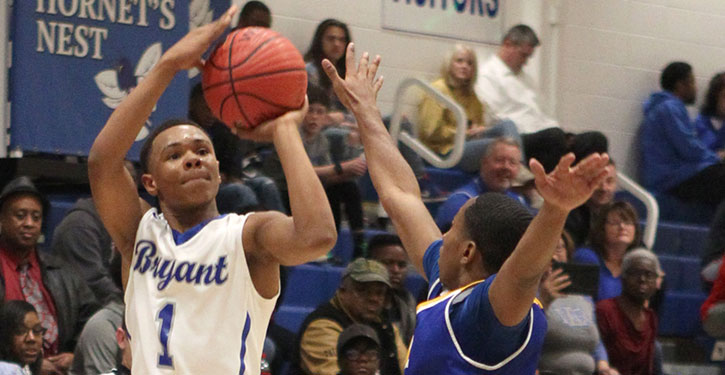 Led by a shooting guard who was named all-State as a sophomore, a point guard who started all last season as a freshman and the team’s lone senior, the Bryant Hornets get their first taste of competition tonight when they host the White Hall Bulldogs at the Hornets’ Nest in a preseason benefit game.

The three returning starters listed above are Khalen Robinson, Camren Hunter and Rodney Lambert, respectively. They helped the Hornets post a 16-12 record, 7-7 in the Central conference and a 4 seed to the State tournament.

The Hornets are scheduled to open regular-season play on Saturday, Nov. 17, in the North Little Rock Showcase against a team to be determined. They won’t play a home game until they start action in the 6A-Central Conference against Fort Smith Northside on Jan. 4.

“We’ve got good guard play and we’re pretty athletic and I think we’re a little deeper than last year,” said Hornets head coach Mike Abrahamson, who will be assisted this year by John Harrison after former assistant Dominic Lincoln was hired as head coach at his alma mater in Crossett. “But still, overall, we’re young. We only have one senior. And we’re not very big. Now, both of those things could potentially change when football’s over. We could potentially add some people out of football, but I don’t know yet. For now, we’re just planning on the guys that we have so, if we add players, we’ll adjust.”

Lambert is the senior, a 6’2” guard. Along with Robinson, the juniors on the team include Johnathan Hall, Colby Washington, O.J. Newburn, Kayleb West, A.J. Jenkins along with Treylon Payne, a move-in from Episcopal Collegiate in Little Rock, and Padrick Martin, a move-in from Little Rock Central.

“I think we’re more talented overall and I like that,” Abrahamson said. “And being deeper, it gives us some options. I feel a lot more comfortable putting people on the court.

“We’re a little bit more experienced in some spots,” he noted. “I think Cam starting every game as a ninth-grader and Khalen coming in last year and playing as much as he did and Rodney as well, starting for the first time, last year. Hopefully, that experience is huge. And Treylon has just been in a lot of games. He doesn’t have experience with us, but he has experience. He’s a scorer. He can fill it up.

“Padrick could really help us,” the coach said. “He’s ineligible first semester. We’re monitoring and trying to get him going in the right direction academically. He’s about 6’2, maybe 6’3” but he plays bigger. He’ll definitely help. He’s a good kid and he does everything we ask him to in basketball. He’s improved on some things since he’s been here.

“Colby Washington has really improved and is ready to have a good season,” he continued. “He’s super athletic. We’ve got Khasen Robinson, A.J. Jenkins. Aiden Adams, a sophomore, is a tremendous shooter. We’ve got to get him caught up in some other areas. We think he’ll be able to help us. Jonathan Hall has improved and will help this year. Right now, he’s our only size (at 6’5”).  O.J. Newburn, he dislocated a finger. He’s out probably until Christmas. Then Khasen can come in.

“There’s some other guys that kind of remain to be seen,” Abrahamson related. “We’ve got a lot of depth. It’s just they’re all guards.”

The coach acknowledged that the lack of size will be a factor for the Hornets.

“It’s going to affect the way we play defense,” he said. “I’m not as much worried about the offense. I think that we’ll be able to figure that out at least to get the shots, to get the looks that we want. But the defensive side of it, you know, we have a plan and we’ll have to see how our opponents play against us then we’ll probably tweak and adjust as the year goes on.

“We’re going to try but I don’t know if we’ll get a defensive rebound all year,” Abrahamson quipped.

“There’s going to be some game-slippage,” the coach allowed. “I get that. But there’s a difference sometimes between game-slippage and, as (Bryant Superintendent) Dr. (Karen) Walters would say, ‘Showing out’. She coached one of our teams in the intersquad game and she yanked one of our guys out of the game for showing out and I was all for it. We’re on the same page about that. I loved it. And we had a lot of guys playing that way on Tip-Off Night. But that was a fun thing and we’ll see where we go from there.”

Freshman Hornets hang on, advance to tourney title game
Everybody back and better as Lady Hornets host Maumelle tonight