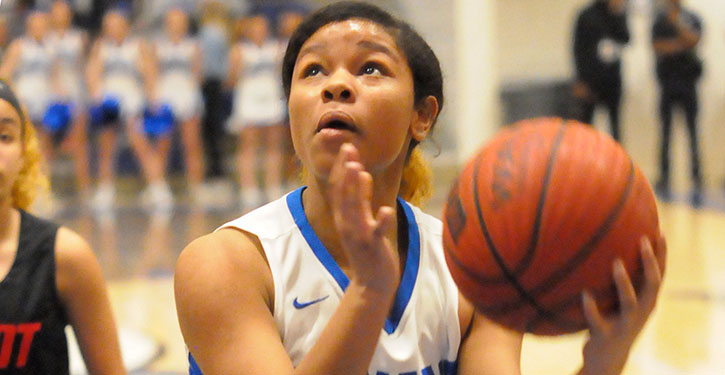 For the last couple of years, one group of players has provided a core to the Bryant Lady Hornets’ basketball team. They’ve played a lot of ball for head coach Brad Matthews and, last year, finished tied for fourth in the 6A-Central Conference. They won a State tournament game before getting knocked out by the eventual champion, Fort Smith Northside. They were 16-10.

Now those girls are seniors and, tonight, they get their first taste of competition in the 2019-20 season with a benefit scrimmage at the old Hornets’ Nest against E-STEM with tipoff at 6 p.m.

Plans are for it to be their last game at the old gym, built in 1968. The new arena is set to open early in 2020 before a Jan. 7 shootout against the rival Benton Lady Panthers.

“A lot of them got a big taste of it as sophomores,” Matthews acknowledged. “Last year, we had quite a bit more success. Hopefully, we’ll be able to use that experience, that knowledge to be able to build on that.”

“They’re all in the rotation,” Matthews said. “So, we should be experienced. We lost some good players off last year’s team, but I think the work they’ve done since April — that’s its own season — and now we’re ready for our game season. It’s an exciting time. Motivation won’t be a problem.

The coach said the team will be much more aggressive this year.

“Last year, there were games where we had three six-footers out there and, in girls, that’s really, really big,” he said. “This year, we have one kid. McKenzie’s 6’2” and everybody else really is between 5’5” and 5’7. McKeycia Baker’s a little taller than that. But we’ve got so many kids that are a little bit smaller, so we’re going to be much more aggressive on both ends of the floor, really aggressive on defense.

“I feel like as we go into this game, we can play nine, maybe 10 kids and we’ve got a couple more that, based on how they practice, could work their way into that,” Matthews concluded. “We need that depth because, giving up that much height, you’ve got to do something to offset that. So, instead of looking at that as a detriment, we’re going to use it as a positive, use it as a weapon.”

The Lady Hornets are set to officially open the season at a tournament in Lake Hamilton starting Saturday, Nov. 23.