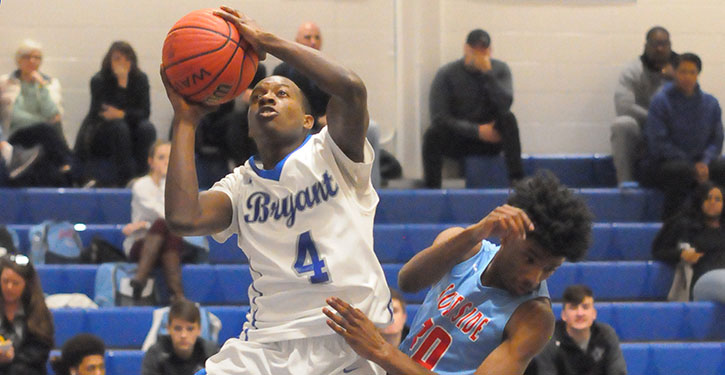 So, it was the summer of 2005, and the Bryant Black Sox Senior American Legion team figured to be a favorite to win a State championship with the return of all-everything player, Travis Wood along with a solid team that included future Arkansas Razorback Justin Wells.

The year before, they’d made it to the finals only to be denied.

But when Wood was drafted in June 2005 by the Cincinnati Reds, he wound up signing and thus playing nary a game for the Sox that summer.

The rest of the team, however, closed ranks and won State anyway.

Fast forward to 2019. In the spring, the Bryant Hornets basketball team, behind NCAA Division I prospect Khalen “K.K.” Robinson reached the 6A State finals only to be denied by Central Conference rival Fort Smith Northside.

With all but one player returning, the Hornets were expected to contend for a State title again in 2020. But Robinson got an invitation to transfer to the prestigious prep school in Virginia, Oak Hill. He just could not turn down the opportunity to play at the renowned boarding school.

So, the Hornets will be without their two-time all-State performer as they begin the 2019-20 campaign with a benefit scrimmage against E-STEM tonight at the old Hornets’ Nest, starting around 7:30 p.m.

It should be the last time the Hornets play in the gym that was built in 1968. A brand new Arena is under construction and, hopefully, will be ready by the first of the year when Bryant hosts the rival Benton Panthers on Jan. 7, 2020.

And, perhaps, like those Black Sox in 2005 without Wood, these Hornets, without Khalen Robinson, can made a return trip to the State title game and win it. They certainly have some talent, including returning starters Treylon Payne, Camren Hunter, A.J. Jenkins and, once football is over, Catrell Wallace.

“You know, we’re going to be different after football season,” noted Hornets head coach Mike Abrahamson, who is expecting the 6’6” Wallace to return along with Austin Schroeder, Darrick Rose, Will Diggins and Devin Pitts to join the team after the Hornets gridiron campaign concludes as they try to repeat as 7A State champions.

Tonight, Abrahamson said, “We’re going to dress nine and we’ll need to stay out of foul trouble. We need to be able to play disciplined defensively, while still playing hard. Offensively, I just want to see aggression and as few turnovers as possible.

“Treylon Payne hasn’t practiced since school started,” he mentioned regarding his senior sharp-shooter who earned all-State honors last year. “He had foot surgery at the end of July. We’re hoping he’s going to get cleared very soon but he’s not going to play tonight.”

The Hornets will also be without 6’4” senior Jonathan Hall, who had to have knee surgery late in the summer and will miss the season.

Along with Payne, Jenkins, Wallace, Pitts and Rose, seniors on the team include Kayleb West, Padrick Martin and O.J. Newburn. Juniors include Hunter, Diggins and Schroeder as well as Aiden Adams and Jalen Montgomery. Khasen Robinson, Khalen’s younger brother, will be a sophomore after playing considerably as a freshman on the varsity team last season. Landyn Newburn is also listed on the varsity as a sophomore.

Regarding the scrimmage, Abrhamson continued, “Rebounding could be an issue, early especially. But, if we block out, I think we’ll be okay. But it’s one of those things that, it seems like you have to get exposed on, before they really buy into it. But we’ll see.

“We have some small guys, but I don’t think we are tiny across the board,” he allowed. “It’s just that we’re going to be a lot bigger when we get our other guys. Right now, it’s going to be important to stay out of foul trouble and do those things like block out and not turn the ball over, to control the game the way we want it to be.”

The Hornets face a fierce non-conference schedule including some high-profile tournaments. They’ll officially open the season at Hoopin’ For Hoodies in North Little Rock against Pulaski Robinson on Nov. 23.

They’re also set to play in the Rumble on the Ridge in Forrest City at Thanksgiving, an ESPN Showcase at Hot Springs on Dec. 7, Jammin’ For Jackets at Little Rock Hall Dec. 12-14, the Conway Classic on Dec. 20, and the King Cotton Classic in Pine Bluff between Christmas and New Years.

“The non-conference schedule was completely put in line for the players, which, at the time, did include K.K., but not only K.K.,” Abrahamson said. “Also, Treylon and Cam and A.J. Things that maybe, personally, I didn’t want to do but I did it for the kids to try to put them in situations where they could be excited about it.

“With Khalen being gone, it doesn’t change anything in terms of our expectations,” he asserted. “We’re going to play who’s on the schedule and, you know, we take pride in not playing the so-called cupcakes. We take pride in playing a tough schedule. We’ve had tough schedules in the past. It’ll be a little bit different because we’re going to play more out-of-state teams in some of these tournaments, but we embrace the challenge.”