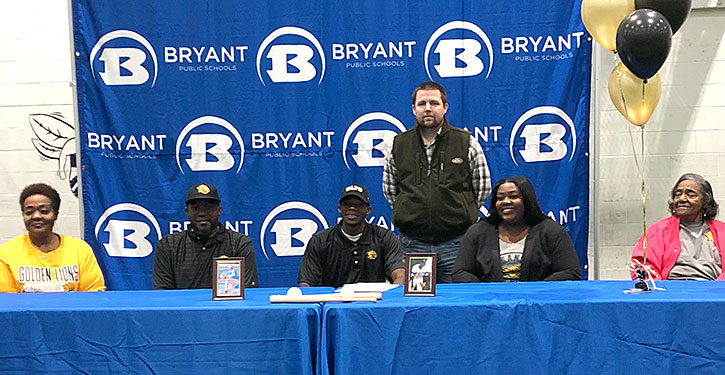 Zion Collins had plans to be the best baseball player he could be. And his father Isaac wanted to make sure he had every opportunity to do that.

So, when the Bryant Hornets were winning four State championships in seven years earlier in the decade, they talked about moving from Monticello to Bryant. He was in the fifth grade.

And when he became a freshman on the Hornets’ team, he came to believe he could someday play in college.

“Me and Coach (Travis) Queck sat down and he told me I was going to be one of those freshmen that he brings on varsity trips,” Collins said. “From that moment on, I knew I had something special. So, I’ve got to use what God gave me and take it as far as I can.”

And, as of Wednesday, college ball became a reality as Collins, the son of Isaac and Marshelvia Collins, signed a national letter of intent to continue his academic and athletic career at the University of Arkansas-Pine Bluff.

“Zion is a guy who’s earned everything he’s gotten,” Queck, the Hornets’ head coach, said. “He’s busted his hump and worked extremely hard, day in and day out, to put himself in this situation, to get this honor of playing at the next level.

“His best days are way ahead of him,” the coach added. “Sometimes that happens. It’s not that he’s deficient right now by any means. It’s just, I see so much more in him and I can’t wait to see that come to light.”

As a junior, Collins was a defensive specialist on the Hornets’ 6A-Central Conference championship team, most often come in late in games to play shortstop or second base.

“Zion’s going to figure in somewhere on the infield, however it works out,” Queck said of the 2020 season. “I look forward to him being out there.”

He didn’t hit often, however. But Queck said that Collins has improved.

“He’s come a long way in a short period of time,” the coach related. “That’s the dedication between him and his dad and his determination to fix some flaws that he had. He’s fixed it and I commended him on that during the summer.

“Defensively, he did exactly what we needed him to do last year,” he added. “I wasn’t afraid to put him out there at any point. What got us was sometimes we had pitchers on the mound that needed to be hit for. We didn’t have guys positionally where he was able to hit and play defense. So, a lot of times he was playing defense for a guy that was swinging it.

“One thing he’s got to improve is he tends to get long (with his throwing motion) as a shortstop,” Queck continued. “If that’s the case, you could see him moving over to third base a little bit or being a pitcher. When you look at long arm slots, you think pitchers or outfielders. I think that’s something he can work on and improve on. I hope he can take over at short for us. If not, I know he can do third and we would not skip a beat.”

“To me, I want to be at shortstop,” Collins asserted. “But I can see on film and what college coaches tell me, that’s not my strongest position.”

“I think on the mound is where he’s going to really, really light up,” Queck said. “Sneaky, heavy fastball, he’s got a chance to add some velo once he grows and matures just a little bit more. Then, the breaking ball, I’ll tell you what, we spent about two weeks late last spring and he pitched off his breaking ball and there wasn’t a better breaking ball in the league. It opened up a lot of doors for him, especially how to attack hitters.

“It’s a curve and I mean it’s 12 to 6,” he said, referring to the downward break on the pitch. “It didn’t come up out of the hand. It came out and right off the table. It was impressive.

“And you know when you see a kid get confidence in it and he can do it and do it again and again, that’s what he was doing for about two, two-and-a-half weeks. It was toward the end of the season but, my gosh, I was like, ‘Here we go. This is good stuff right here.’ And I let him know that. I hope we can get back to that right away. If we can get there, this season could be special.”

Asked about his approach on the bump, Collins said, “I’m very aggressive on the mound. I want to get strike one, strike two. I hate getting behind in counts. If I do get behind in a count, it’s against a really aggressive hitter.

“Teams like Conway and Cabot, I have to give credit to because they’re teams you really have to use your baseball knowledge against,” he added. “You can’t just go up there and throw fastballs down the middle. You have to really use your strategy and really hone in with your coach. You have to really work with your teammates to figure out ways to beat good teams like that.”

“It started at the beginning of the summer,” he said of the recruiting process. “I started playing for a new summer team, Maximum Impact. The coach, at first, was Blake Knight (the father of former Arkansas Razorback and current Baltimore Orioles farmhand. “He kind of transferred down and started working with some younger guys. So, he brought in Coach (Jon) Tatum. He started working with me on some things. He pulled me to the side after one game at Conway and told me he saw some potential in me.

“As the summer progressed, (UAPB) eventually offered me and I just kind of came into my own,” Collins said. “I feel like I just grew to it. I went on a lot of other visits and I just couldn’t find any other school that felt like home.

“As soon as I got there, the coaching staff just welcomed me with open arms and the players, I got to meet them. I got to go work with them on the field and see how they did practices. It just seemed like a big friendly environment, like everybody loved each other. Nobody putting nobody down. They worked hard. They had fun. And that’s just what I’m here to do. I’m here to work hard and have fun.

“I’m excited for my senior year,” he mentioned. “I want Bryant to go undefeated. Congrats to the football team. They’re doing an amazing job. I want baseball to pick up right where they’re leaving off and every other sport behind us.”

Regarding his education, Collins said he wanted to major in Business Management.

“My dad actually owns a trucking company and I kind of want to follow behind him, start doing some things like that,” he said. “Also, my mom’s a realtor. They’re already in kind of management positions and I like and understand what they do. So, I’m just following in behind them.”