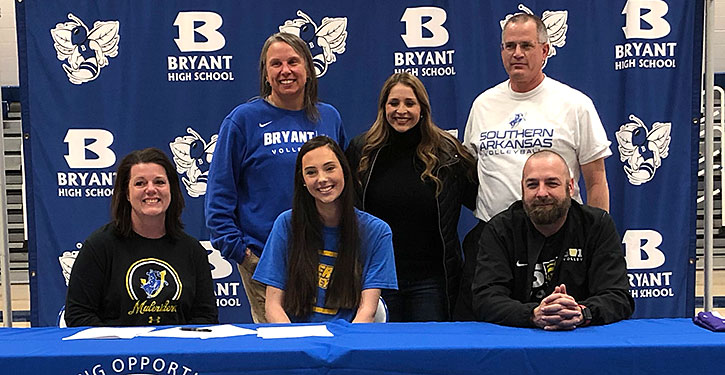 Bryant Junior High volleyball coach Melissa Bragg recalled when she first asked Truli Bates if she wanted to play volleyball for the eighth-grade team. Bates demurred, telling Bragg that she was a basketball player.

But, with encouragement from other girls, Bates decided to try it. But it wasn’t until her first serve, ironically enough, that she decided she loved it.

Bates recalled that it came against Lighthouse Charter School and her serve not only got over the net — something she wasn’t sure would happen — but it got down for an ace.

“I was hooked from that point forward,” allowed Bates.

It’s ironic that it was her primary desire at that point, according to Bragg because, even now, after her just concluded senior season at Bryant High School, she rarely, if ever, serves.

Still, Bragg said, “She’s come a long way since that first year for me at Bethel.”

So far, in fact, that, on Wednesday, Bates, the daughter of Missy Cherry, signed a letter of intent to continue her academic and volleyball career under scholarship at Southern Arkansas University in Magnolia.

Not bad for a basketball player.

At 6’2”, Bragg is one of the tallest girls to play for the Lady Hornets. She developed into a solid blocker and has gotten better and better as a hitter on the Bryant front line.

“But you also have to learn the whys and the whens,” he continued. “So, when is it that I bunt instead of swing away? When is it that I hit a roll shot instead of swing with everything I have? And that’s one of the most difficult lessons because, as big as (Truli) is, her instinct is just swing, just slap, just go play out of control. She’s gained a lot in that area. She’s matured as a human being and don’t we know all teenagers need that a little bit?

“She’s gotten a little stronger,” the coach said. “She’s still got a long way to go. We worked a lot on nutrition. She needs some weight put on her. I’ve talked to her college coach as well and her club coach — we’ve all talked about, ‘This is what you need to do to keep from injuring yourself and for you to continue to improve as a player.’

“I’m so excited to watch what she’s going to become,” she added.

Bates admitted that she wasn’t even sure she was going to play in college.

The Lady Hornets have struggled to put together winning seasons in Bates’ time at the high school. It’s been frustrating.

“Obviously, it’s a team sport but I felt like we had so much potential especially my sophomore and senior years — we had so much potential — I just felt like there was a culture, kind of a stigma,” she related. “That we couldn’t win, and Bryant volleyball has no history of winning. I mean, we were conference champs just a few years ago then it was just downhill. I took it personal. I would go home and watch film. I would come in early and stay late. It hurt. I hurt real bad, actually.”

That changed some last summer.

“I made the national team,” Bates recalled. “It felt good to win. I loved to win. So, Jason Lambert, my club coach, put in a lot of time with me. We would just stay in the gym after practice and before practice and just work. It started to come together and made me feel good again. So, I fell in love with the game and wanted to continue playing.”

“You can’t teach being tall, but you have to teach what to do with it,” Back explained. “I was one of those players in softball. I could swing a bat and hit a ton, but it probably took until my sophomore year in high school that I finally had a coach say, ‘Let’s take that strength and do something with it. Let’s teach you a little finesse’. So that’s what we’ve been working on with Truli, teaching her the finesse piece of it.”

Bates said she’s been working to improve a lot of things but there’s one thing in particular going into her senior season.

“I feel like, honestly, my blocking has always been there — not always, but it’s been one of my strong suits,” she said. “My hitting, I’ve worked very hard on that arm swing. But I think leadership, like I’ve worked hard on trying to be in that leadership position, just because I wanted to see success in this team. I wanted us to grow as a group of girls. I wanted it to be a sisterhood, not just a volleyball team.”

“I wish I could’ve taken her farther, but I’ve talked to so many college coaches over the years,” said Back. “They don’t want that perfect player walking in the door because they want to grow them. So, they don’t want that refined player that has reached their maximum.”

So, once Bates decided to try to play in college, the process began.

“Jason, he was like, ‘You really just need to look at schools, go visit them’,” she recalled. “So, I visited two or three schools in Arkansas and Missouri before I contacted Lindsey (Partridge) at SAU and I went down there for a visit. I just fell in love with it. I went on a few other visits after that. But (SAU) just felt like home. So, that’s where I ended up.”

Bates, who called herself the “Baby Giraffe” early in her career, made the 18 National team at 501 Volley, she said, and it may give some insight into where she’ll play at SAU.

“I got moved to the right side where I’ve always played middle,” she explained. “(Partridge) plans to start me at middle and see how that works then maybe move me to the right side. I don’t know. I’m kind of just going back and forth between those two positions. I honestly prefer playing right side, but I was obviously recruited as a middle, so we’ll see what happens. I plan to go down there and work as hard as I can and get some playing time my freshman year.”

And her academic plans?

“I’m kind of going back and forth right now. I’m interning at Friendship Daycare and I’m going to interview at the Boys and Girls Club, just trying to see what age I want to teach,” she related. “But I think that I’m going to go down there and I’m going to get my nursing with an additional certification in teaching. Then, if nursing doesn’t work out, then I’ll have all the required teaching courses. I’ll just go back and get a bachelor’s in history and I’ll get certified as a coach. Those are my two plans, but I feel like teaching and coaching is where it’s at for me.”

And on the front line of a college volleyball team.