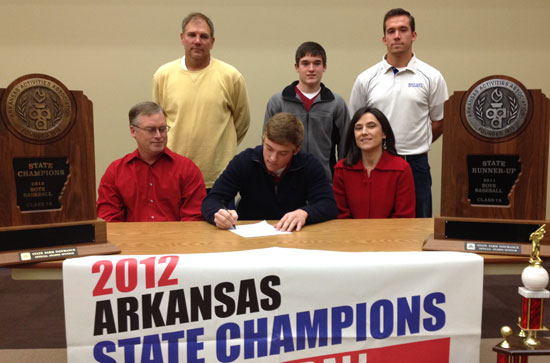 Ezell signs with Division I program at Southeast Missouri

If your best player is one of the hardest workers on your team, he often becomes leader without saying a word.

That’s how Bryant Hornets baseball coach Kirk Bock described the leadership of senior shortstop Trevor Ezell who, on Monday, signed a national letter of intent to continue his education and baseball career at Southeast Missouri State University in Cape Girardeau, Mo., next fall.

Over the summer, he paced the Bryant Black Sox Senior American Legion team with a .401 average, 57 hits, 45 runs scored and 33 RBIs to go with 11 triples, six doubles and a homer. He walked 28 times and stole 10 bases.

“He’s one of the better ones I’ve ever had,” declared Bock. “Just all around. We have guys that are pretty good defensively and some that are pretty good offensively but Trevor’s the total package. He can run, he can throw, he can hit with power and he brings a good average to the table. He’s a good one.”

Together with second baseman Korey Thompson, who recently signed with Arkansas Tech, Ezell has been part of one of the best double-play combinations the Hornets have ever had.

“When he first broke in as a sophomore, he was more of an offensive guy,” Bock related. “His defense has really come around. He’s always had a good glove. The throwing aspect, he struggled with a little bit early but he’s worked hard on it the last three years and he’s continuing to work on it. It’s not that he doesn’t have a strong arm, he was just not very fluid when he threw. His upper body and his lower body didn’t always stay in sync. But his hard work as made him a lot better.”

Ezell said he first started thinking about a potential college career when he was a sophomore.

“Coach Bock gave me the chance to start at mid-season and we ended up going on to win the State championship,” he recalled. “That’s really when I decided, for sure, that I wanted to go play college baseball.”

When asked what made him choose SEMO, he said, “It felt more like someplace where I could fit in. The first thing was the coaches. When they got in contact with me, they really made me feel like they wanted me to come there. I really liked the guys. They’re good guys. After that, going to see the campus — just a beautiful campus. I know the team’s got a good chance to win, to do things in the future. That was real attractive.”

Ezell said the coaches talked to him about playing shortstop. “I know they’ve got another guy there right now that they hope they can move to the outfield and fill me in at shortstop,” he related. “They hoped that I can come right in with my hitting ability, if I’m hitting like I can, they want me to play the first year.”

The coaches indicated too that they liked Ezell’s ability to switch-hit effectively.

“This last year, my junior year, my swing really developed,” he noted. “I was able to do a lot of things, go both ways with the ball. It really gave me a chance to excel.”

Ezell said he was hoping to study Engineering.