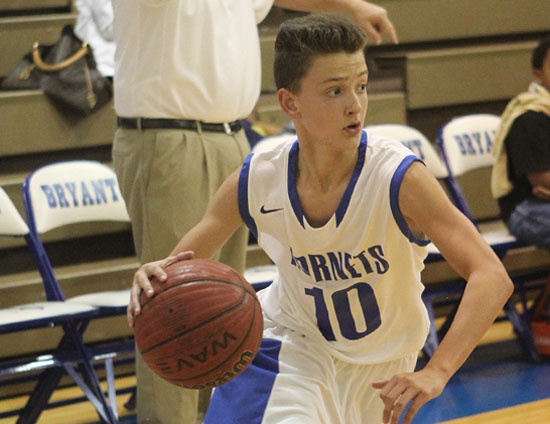 The Bryant Hornets freshman team overcame a 12-point deficit going into the fourth quarter to force overtime against the Pulaski Academy Junior Bruins on Saturday. But the Bruins eked out a 47-46 win in the third-place game of the Bryant Invitational Tournament. 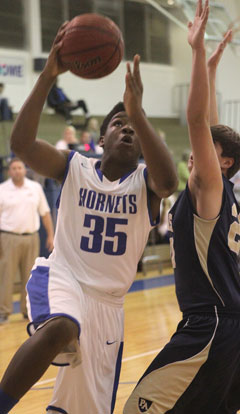 John Winston (35) goes up for a shot. (Photo by Rick Nation)

“After coming off a tough loss to Benton, we really focused in on coming back strong and ending the tournament on a positive note,” said Hornets coach Tyler Posey. “Pulaski Academy made it tough for us with their long arms in a really aggressive 3-2 zone. They were able to create turnovers out of their zone.

“We played flat for three quarters and dug ourselves a hole,” he added.

“During the fourth quarter, we found a spark and really made a run, converting four consecutive 3-pointers,” Posey related. “All of this was set up by an energy we had not shown throughout the game and something we will have to find going forward.

“I really liked the effort and execution in the fourth quarter and in overtime,” he said. “But we just couldn’t come out with a win.”

The Hornets doubled their score in the fourth quarter, pulling even at 42 at the end of regulation.

They’re set to travel to Benton for a rematch on Monday, Nov. 25. 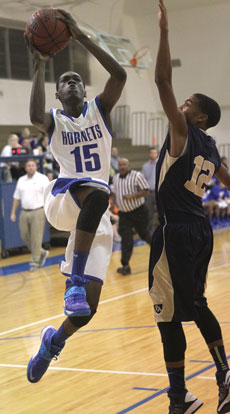 Kaleb Turner drives to the rack. (Photo by Rick Nation)