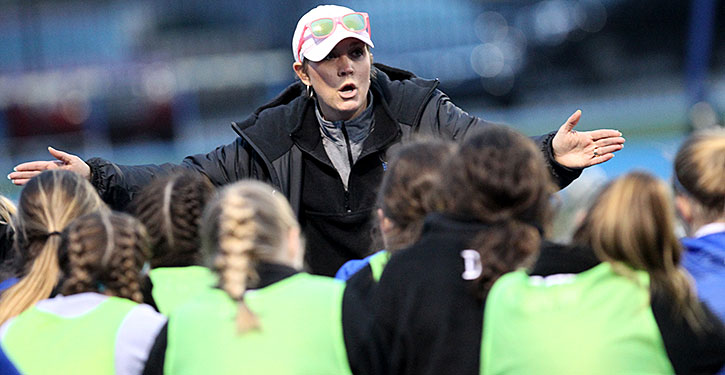 The score may not indicate it at first glance, but the Bryant Lady Hornets turned in another dominating performance on the soccer pitch at Bryant Stadium Friday night in a 1-0 victory over the rival Benton Lady Panthers.

Alyssa Fason scored the lone goal off an assist from Melinda Hernandez just a minute into the second half.

“We out-shot them and out-played them,” acknowledged Lady Hornets coach Nicole Inman. “They jammed the center full and looked for the opportunity to counter attack. That’s really what they were looking for.

“Technically, we had two saves,” she mentioned. “They came down probably twice. One, on a quick counter, we caught. I looked like it went in the net, but the girl used her hand to push it into the net.

“So, they called it and I didn’t even know this,” the coach recounted. “I didn’t even know it was a hand ball. I just thought it was offsides. It looked like it could’ve been. But, as she pushed the ball in, she said, ‘Oh, I just used my hand! I guess that’s not a goal.’ They had already called it.”

Meanwhile, the Lady Hornets worked the ball offensively much of the game and took 28 shots and nine corners.

“We had some good opportunities to just possess the ball and be able to take some shots,” Inman stated. “We had a lot of really great things that looked like it could be. There was one where a ball came in and it hit the top of Ashton (Inman)’s head and she flicked it on to MC (Mary Catherine Selig) who was coming in behind. She headed it in, but they called her offsides.

“I couldn’t see from where I was because they were literally on the goal line on it,” she said.

In summary, the coach said, “It was good. We had a lot of different people getting shots, had lots of movement. There were good things. It was just that (Benton) covered the middle of the box and made it hard for us to attack.”

Now 2-0 on the season, the Lady Hornets return to action on Friday, March 8, against Searcy in a tournament hosted by Conway.