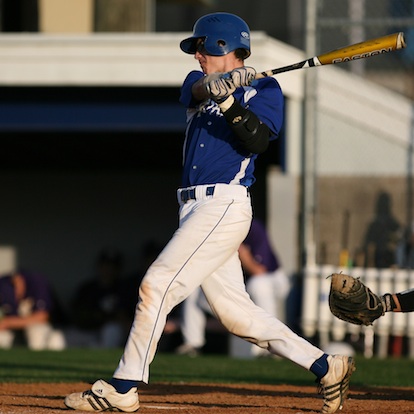 Sometimes, the turning point in a baseball game can come in the very first inning.

On Tuesday night, for example, when the Bryant Hornets hosted the Little Rock Catholic Rockets in a 7A-Central Conference game, Chris Joiner had opened the bottom of the first inning with a shot to the gap in left-center for a double. Garrett Bock worked a walk but Rockets pitcher Stuart Montez the retired Bryant’s best hitter Hunter Mayall with a pop to short.

That brought up Brennan Bullock. Now, if Montez could retire Bullock, he stood a decent chance to getting out the inning unscathed even with Bryant’s top RBI man, Jordan Taylor, up next. There would’ve been two out, the momentum would have shifted and Montez could be careful with Taylor with first base open.

But Bullock came through with a looping liner to right that evaded Catholic outfielder Zach Gibson. Not only did Joiner come home but that opened the gates on a five-run inning.

With the early lead, Bryant starter Caleb Milam did what coaches from Little League to the Majors tell their pitcher when they’re in such a situation (though, at every level, it’s somehow a struggle). He pounded the strike zone. Though the Rockets managed nine hits, because Milam didn’t walk anyone and the Hornets committed just one error, they managed just three runs absorbing an 8-3 setback.[more] 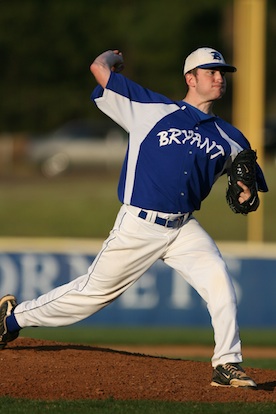 In contrast, Rockets’ pitchers combined to issue five walks and a hit batsman to go with four fielding miscues.

Bryant improved to 15-1 overall and 2-0 in league play while the Rockets fell to 0-2 in the conference.

The Hornets travel to Van Buren on Thursday for another league contest then visit Lake Hamilton Saturday for a non-conference contest.

Milam went the distance on the mound for the win. Brady Butler and B.J. Ellis each had two hits to pace Bryant’s efficient eight-hit attack.

After Bullock’s hit in the bottom of the first, Bock scored on a wild pitch then Taylor crushed a 3-2 pitch to the fence in left-center to chase home Bullock. Butler singled past the third baseman and a wild pitched allowed Taylor to score. With two down, Caleb Garrett drew a walk. The count went to 0-2 on Ellis who then cracked an RBI single to center to make it 5-0.

Catholic got on the board in the third. With one out, Drew McMahan and Blaine Tanner singled and, with two down, Matt Morris reached on an error as McMahan scored.

Milam kept the damage to a minimum, inducing a bouncer to Taylor at short for a force at second to end the inning. 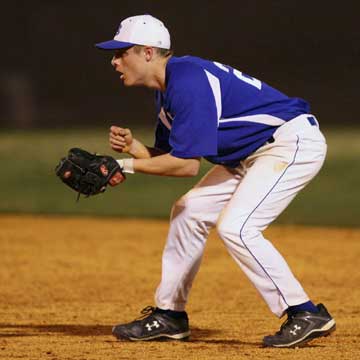 Montez retired the side in order in the bottom of the third but then Milam returned the favor in the top of the fourth.

Garrett beat out an infield hit to open the bottom of the fourth. He stole second and, after Joiner drew a one-out walk, Bock’s roller to second was fielded by Tanner who tagged Joiner out but when he tried to relay to first in time to get Bock, Tanner’s throw was wild, allowing Garrett to score. Mayall reached on an error but Bullock was retired on a nice sliding grab of a foul pop by Rocket catcher Aaron Chwalinski to end the inning.

Catholic put two more hits together in the top of the fifth, a triple by Nick Rougeau and a two-out double by Chwalinski that produced the run but, again, Milam kept it to that.

Bryant led 6-2 going into the home fifth. Taylor drew a walk and Butler singled to left, forcing a pitching change for the Rockets. Lefty Joe Friend was greeted by Lucas Castleberry who delivered a sacrifice fly to center. With two away, Ellis parachuted a single in the midst of three Catholic defenders in shallow left-center, chasing in Butler who made it 8-2.

In the top of the sixth, Hunter Rankin gapped a shot to right-center for a double. Milam came back to strike out the next two batters before Quinn Gasaway pulled a single into right to get the run in.

Milam, however, continued to throw strikes, getting the final out on Rougeau’s grounder to second.

After the first inning, Milam only went to three-ball counts twice the rest of the game. In the second, Chase Barnes singled to center on a 3-2 pitch. In the fourth, the count went to 3-2 on Gasaway before Milam got him to ground out to Castleberry at third.

The right-hander retired the side in order in the top of the seventh, using just six pitches to close out the win.