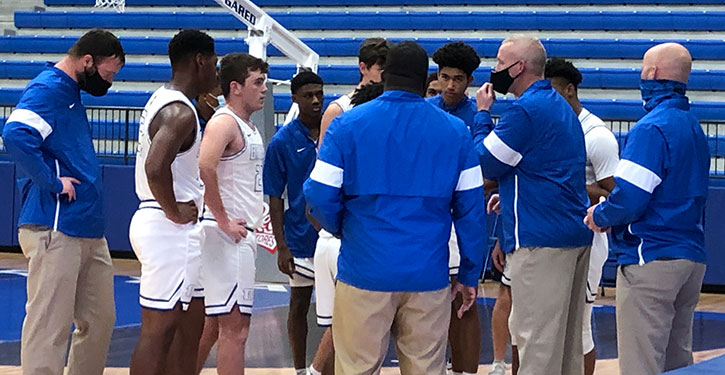 The Bryant Hornets opened their preseason benefit scrimmage against the White Hall Bulldogs with a 14-2 run on Tuesday night at Hornets Arena. Though the Bulldogs made a little run late in the first quarter, Bryant outscored them 11-2 to start the second quarter on the way to a 71-33 win.

Camren Hunter scored 17 points and fellow senior Gavin Burton added 13 to go with a game-high six rebounds. Khasen Robinson picked up 9 points, Landyn Newburn 8 and Jalen Montgomery 7. Kade Ruffner hit a pair of 3’s as did Darren Wallace to account for 6 points each. Aiden Adams had 5.

“I thought our guys did well,” said Hornets head coach Mike Abrahamson. “I thought we played to our standard. I thought we defended well.”

“I mean, White Hall, they’ve got a new coach,” Abrahamson mentioned. “They’re trying to put in a new system. Their coach passed away last year. It’s been rough for them. They’re kind of trying to change some things, kind of get a new attitude and mindset.

“I didn’t know what to expect from them,” he added. “I was just worried about what we were going to do.”

“When we subbed in towards the end of the first quarter — we had basically all subs in there — we had a big drop off in production,” Abrahamson commented. “White Hall scored 4 or 6 straight points. So, we took them all out to start the second quarter and put the starters back in. The level of play came back up. But then, as we put those guys, our subs, back in, they adjusted and got a little bit more comfortable with what we wanted to do. That’s encouraging.

“A lot of those guys are new to what we’re doing and being out here on this court and playing a varsity game,” he noted. “I was disappointed at first, but I was really pleased with how they responded when they came back in late in the game. Some guys really began to make some nice plays for us.”

“We didn’t shoot it great early, but we were really defending and that set the tone for what we wanted to do and made it really hard on White Hall to score,” Abrahamson pointed out. “Then, as we got comfortable, we started making those shots and that’s fun to watch.”

The Hornets don’t actually open the regular season until Dec. 4 at home against Pine Bluff.