The Bryant Lady Hornets bounced back from their first loss of the season with a resounding 9-1 win over the Central Arkansas Christian Lady Mustangs on Monday, Feb. 26. The Lady Hornets were shutout 2-0 in the finals of the Marshall, Texas tournament by Huntington, Texas on Saturday, but the bats came to life in the drubbing of CAC back at home.

The win improved the Lady Hornets to 7-1-1 going into non-conference home games against Clarksville on March 5 and Lake Hamilton on March 6. They open 7A-Central Conference play on March 8, at Mount St. Mary’s.

Tyler Cox pitched five shutout innings, striking out seven. Christian Kirchner worked the sixth and seventh and fanned two more. The Lady Mustangs managed an unearned run in the top of the seventh to break up the shutout.

Bryant took the lead in the opening inning when Hailey King beat out a bunt single and Kirchner beat out a drag bunt for another hit. An out later, Allison Poteet singled to drive both of them home. Randie Juliusson then drove in Poteet to make it 3-0.

It stayed that way until the fourth when Juliusson singled, swiped second and scored on a base hit by Sarah Hart who took second on the late throw towards home. A passed ball allowed Hart to take third and she scored on a sacrifice fly by Laci Rowland, making it 5-0.

In the fifth, Poteet singled and stole second. She scored on an error.

Hart reached on an error to start the sixth. Rowland singled and Lindsey Cason’s grounder to short was booted. All three eventually scored. 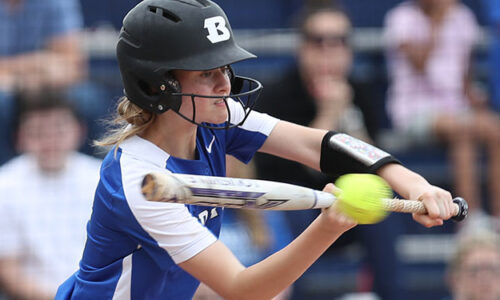