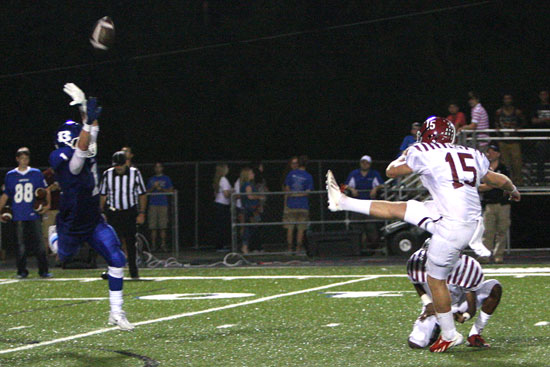 In professional and collegiate football, when a quarterback is scrambling and gets out of the so-called “tackle box” — an imaginary box from tackle-to-tackle on the offensive line when the play starts — he can throw the ball away as he tries to escape the pass rush with no intentional grounding penalty. It’s a rule that was put in to help protect quarterbacks, to keep them from taking big hits in vulnerable positions as they scramble. 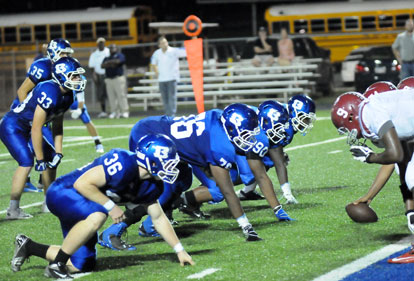 Apparently, rule makers are not as interested in protecting high school quarterbacks because there is no such rule in high school football.

A quarterback cannot throw the ball away to avoid a sack no matter where he is. He must have a receiver in the general area towards which he throws his pass or it’s ruled intentional grounding. Your team loses the down and the penalty yardage, a severe penalty (very few infractions cost a team both).

Now, even with the rule as it is, the Bryant Hornets got a bad break when intentional grounding was called on junior quarterback Brandan Warner early in the third quarter. His throw, though it went out of bounds, was in the general direction of wide receiver Darian Jarrett near the left sideline. He was about 10, maybe 15 yards further downfield.

Warner was scrambling to escape the rush on a second-and-2 at the Pine Bluff Zebras’ 21-yard line. It was the Hornets’ deepest penetration of the game. They trailed 9-3 at the time. He was hoping to avoid a loss but, instead of the third-and-2 situation that would’ve occurred had no penalty been called, the Hornets lost 19 yards on the penalty (marked from the spot of the foul) but the down as well. 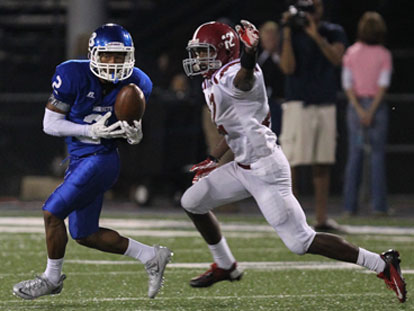 Pushed back to the 40, the Hornets wound up having to punt after an incomplete pass on third down.

They would not get that close to scoring the rest of the game as the Zebras held on for the 9-3 victory.

The problem for Hornets was their best starting field position of the night came when their first possession of the game began at their own 33. After that, they started from their own 20 (80 yards away from the end zone) five times with three other instances when their starting point was even further away, at their 2, their own 15 and their 5. 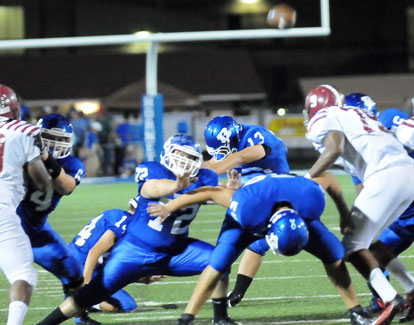 Pine Bluff got a field goal off a drive that started at its own 43 and the lone touchdown off a possession that started at their own 48. The Zebras created their field position advantage with the kicking of Austin McGehee and a ground game that chewed up 349 yards.

Every kickoff by McGehee and Bryant’s Alex Denker, and a McGehee punt as well, were touchbacks.

“We knew field position would be a key tonight,” allowed Hornets coach Paul Calley. “Their kicker is excellent and we always use our kickoff return as a weapon. It always gives us a shorter field and confidence. When you take that away from us, it limits us.

“We never got the short field,” he noted. 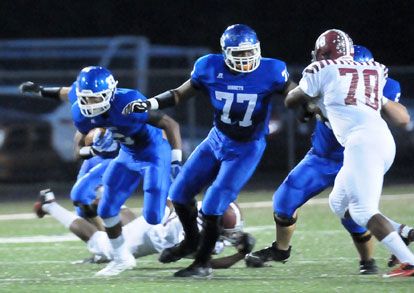 Except for the lone touchdown, a 16-yard run by Kacy Higgins with 7:55 left in the first half, the Hornets played bend-but-don’t-break defense, coming up with goal-line stands twice in each half.

Safety Jake Johnson came up with 20 tackles in the game. Linebacker Bryce Denker was in on 11 stops, Davis Nossaman eight from the other safety spot, and defensive end Jaron Wade seven. Cornerback Drew Tipton made a touchdown-saving tackle prior to one of those goal-line stands. He also blocked an extra-point attempt and downed one of Denker’s punts at the 1.

“I thought our defense played great,” Calley asserted. “We had a lot of great effort. In our last home game, we didn’t play really hard against Catholic. I challenged them before the game, questioned their manhood and they came out and played as hard as they can play. But we still didn’t get it done. 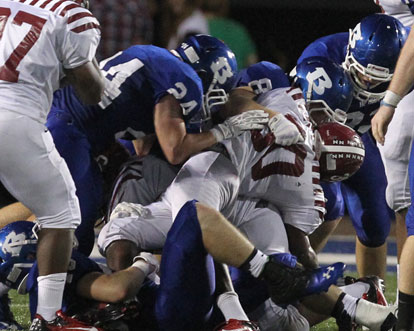 “Offensively, we don’t see that speed (like Pine Bluff’s on defense) in practice,” he explained. “And we do things in practice and it looks great but when you get out here in a game and you see the real game speed, it overwhelms you. It takes you out of your comfort zone. It makes you question your game plan. When you don’t get any more that 10 possessions in a game and you leave your defense out there, they’re going to give out.”

The game proved costly too in that the Hornets may have lost another key player to injury when a returning starter, senior offensive tackle Jordan Jones, went out with a knee injury. Calley has a long list of those who are currently or have earlier missed playing time due to injury, including a few that have been lost for the season.

The teams exchanged punts to start the game. Pine Bluff gained the field-position advantage by then and drove from its own 43 to the Bryant 5 behind the running of Trever Hunt. The drive included the Zebras’ lone pass completion of the game, a 10-yard connection from sophomore quarterback Ladarious Skelton to tight end Will Gragg. 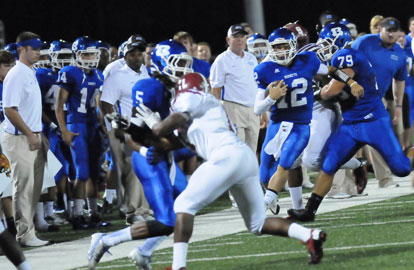 On third-and-goal at the 5, Nossaman brought down Skelton for no gain and the Z’s had to settle for McGehee’s 22-yard field goal.

In turn, Bryant went three-and-out for a second time and the Zebras got the ball back at their own 48. Ten plays later, they faced a second-and-12 from the Bryant 16. Johnson, Wade and Connor Chapdelaine made good defense plays along the way including a stop of Skelton by Johnson and Wade on first-and-10 from the 14.

From the 16, however, the Zebras ran a wingback reverse to Kacy Higgins and he laced his way into the end zone to make it 9-0.

Tipton blocked McGehee’s extra point attempt, which was slowed some by a high snap.

The Hornets started to come to life offensively on the next series (which started, as usual, at their own 20). Warner completed a third-down pass to Kylon Boyle to get the new set of downs. On the next play, he found Brushawn Hunter deep for 42 yards. From the Pine Bluff 27, however, the drive stalled. After Brendan Young picked up 6 to the 23, Alex Denker came on to kick his first varsity field goal from 39 yards out. 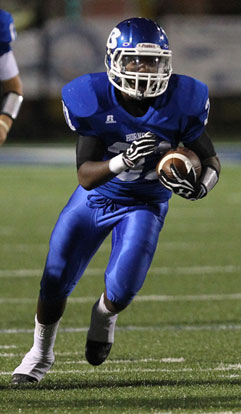 With 4:37 left in the first half, what turned out to be the final score was on the board.

The Z’s made a bid to come right back with a score when, from their own 20, David Beasley broke a long run. He had one man to beat, Tipton, for a touchdown but the Bryant junior played it well and made a great open-field tackle at the 5.

By not giving up on the play, Tipton gave the Hornets a chance to make a stand and they followed up. Wade tripped up Kentorious White for a loss to the 6 and, after Hunt burrowed to the 2, the Hornets made consecutive stops for no gain, taking over on downs.

With 2:02 left in the half, Bryant got something going on offense, driving out to midfield before the half ended. A third-down screen pass to tight end Dalton Greismer sparked the drive by converting a third-down situation. Warner hit Devonte Howard for 17 yards and, after an incomplete pass, Boyle lashed for 15 yards only to have time run out.

But Bryant picked up in the second half where it left off in the first. Using the running of Young, Boyle and sophomore Sevante Turner, the Hornets marched from their own 20 to the Zebras 21 with an eye on trimming the lead or taking it. But that’s when the grounding penalty was called.

The Hornets had a chance to create some field position after Bryce Denker’s point was downed by Tipton at the 1 (though he probably should have been a touchback since he carried the ball on in to the end zone after catching it at the 1). The Bryant defense forced a third-and-8 from the 3 only to have Zebras sophomore Romar Reades break a tackle at the line of scrimmage and lace his way out to near midfield.

But the Hornets made stand from there and forced a McGehee punt which rolled into the end zone.

The teams traded punts until the Zebras put together a drive to the Bryant 2 where, after a delay penalty, McGehee came on to try another field goal. But the kick went wide right and the Hornets’ defense had come up big again. 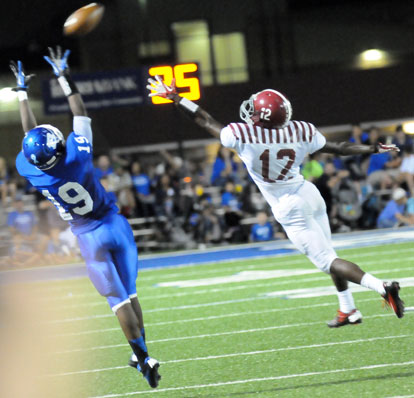 Bryant’s Kylon Boyle (19) reaches high for a pass beyond the reach of Pine Bluff’s Jayshon Williams (12). (Photo by Kevin Nagle)

Given the ball once again at the 20, the Hornets picked up a first down on a 17-yard strike to Howard but stalled at the 32. Howard nearly hauled in a third-down pass but couldn’t hang on when Beasley came up from safety and drilled him.

With 3:34 left to play, the Hornets went for it but Warner’s pass was knocked down at the line of scrimmage by defensive end John Tate.

Once again, the Zebras got into the red zone. An apparent touchdown run by Higgins was negated by a holding penalty and they wound up trying to kick a field goal again to try to make it a two-score lead. But a bad snap sabotaged the attempt. Holder Timante Bolden recovered the ball and tried to pass but unsuccessfully.

With 1:51 left, the Hornets had a last gasp and they drove from their own 15 to the Pine Bluff 48. Warner completed an 11-yard pass to sophomore Evan Lee to get the drive started. Hunter hauled in another throw for 14 yards then Young made a catch for 12 with 1:10 left.

On first down from the Zebras’ 48, however, Warner was sacked by Earnett Adams. He got the yardage back on a second-down completion to Howard but, a play later, the Hornets faced fourth-and-9. Warner tried to go to Howard again but Pine Bluff’s Kedreck Lasley cut in. He was bobbling the ball and Howard reached in to take it away.

Now, there is a rule that when there’s dual possession between an offensive player and a defender, the offensive player is to be awarded with the catch. Though Howard protested, Lasley and the Zebras were ruled to have possession and the Hornets’ last chance had been waylaid.

The 9 points was the fewest allowed by a Bryant defense in a loss since a 9-7 setback against Little Rock Catholic in 2004.

The Hornets dropped to 2-3 overall and 1-1 in the South Conference. It’s the first time since 2005 (when they were 2-3-1 at one point) a Hornets team has had such a start. The 1998 team started 2-4. They’ll try to avoid that fate next Friday when they host the War Eagles of Little Rock J.A. Fair.

The Legacy of Bryant
Cheering on the Hornets