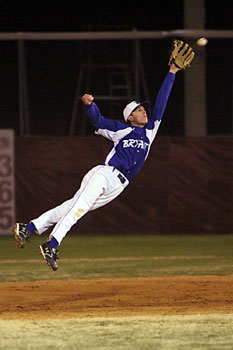 BENTON — A pitcher’s duel blew up into a rout when the Bryant Hornets took advantage of two errors, three walks, a wild pitch, a passed ball and a balk with seven hits in the bottom of the fifth on the way to a 11-1 victory over the Searcy Lions in the opening round of the Benton Invitational Tournament on Monday, Feb. 23.

The Hornets will play Sheridan in the semifinals of the tourney on Thursday, Feb. 26, at 7 p.m.

Tyler Sawyer slugged a long solo homer and picked up the win with four innings on the mound, scattering six hits and striking out seven without issuing a walk. Kaleb Jobe pitched the top of the fifth and worked around a one-out walk.

Garrett Bock, Jobe and Hunter Mayall each had two hits for Bryant.

Sawyer and Searcy’s sophomore flame-thrower Dillon Howard worked two scoreless innings with Howard working out of a self-inflicted bases-loaded two-out jam in the first. He walked Sawyer and Jobe then hit Brady Butler to create the jam before getting out of the inning on Mayall’s bouncer to short.

Sawyer pitched around an error and an infield hit with no one out in the opening frame, striking out the core of the Searcy batting order. In the second, a single, a stolen base and a wild pitch had Preston Tarkington at third with one out but Sawyer picked him off then fanned Cory Perry to end the threat.

Searcy took a short-lived lead in the top of the third when Nick Ginardi singled. Trying to sacrifice, Jordan Bradley bounced into a force at second on a nice play by the Hornet hurler. Bradley swiped second, advanced to third on a bouncer to second by Jonathan Luthe then scored on Howard’s long double to left.

Tarkington relieved Howard in the third and struck out the first two he faced before Sawyer unloaded on a 1-1 delivery to tie the game.[more] 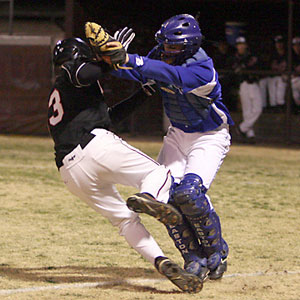 In the fourth, Sawyer worked around a pair of singles. In the home half, Mayal cracked a single to center, advanced on a pair of wild pitches and, after Jordan Taylor was hit by a pitch, scored when Taylor drew a wild throw on a steal of second.

And we shook (the lineup) up a little bit today and we’ll shake it up again on Thursday, and Friday, and Saturday until we find something that’s going to work next Tuesday.”

“We put the ball in play,” Bock noted. “The first guy (Howard) was a quality guy. He’s as good as we’re going to see. That’s what I was telling the players, the other guys we did all right on but we need to hit that

g the players, the other guys we did all right on but we need to hit that guy. And it’s all just about getting into rhythm and stuff. It’s a little bit more difficult at night but, still, we’ve got to get it done because we’re going to see a lot of that.” 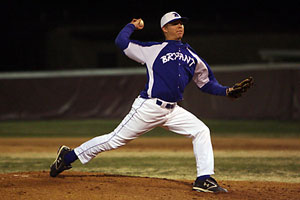 Luthe was Searcy’s third hurler, coming in to start the home fifth. Garrett Bock greeted him with a single to left. He advanced to second on a wild pitch and reached third on a fine sacrifice bunt by Sawyer. Jobe laced a single to center to make it 3-1.

After Caleb Garrett, running for Jobe, took second on a passed ball, he scored when Butler’s bouncer to third drew a wild throw to first. Evan Jobe ran for the catcher and scored moments later when Mayall drilled one to left-center for an RBI double that made it 5-1.

After Mayall alertly tagged and took third on Caleb Milam’s long fly to right, Jordan Taylor drew a walk and Justin Blankenship pulled a single into right for an RBI and Brennan Bullock sliced an single to right to chase in Taylor. With Blankenship at third, Bullock swiped second, drawing another errant throw that allowed Blankenship to score.

Bock’s second hit of the inning knocked Bullock in and Luthe out with Bryant leading 9-1. Chris Bond walked Sawyer and Jobe to load the bases for Butler, who fouled off a pair of two-strike pitches before stroking the game-ending double into the left-field corner.

Two out when game-ending run scored.