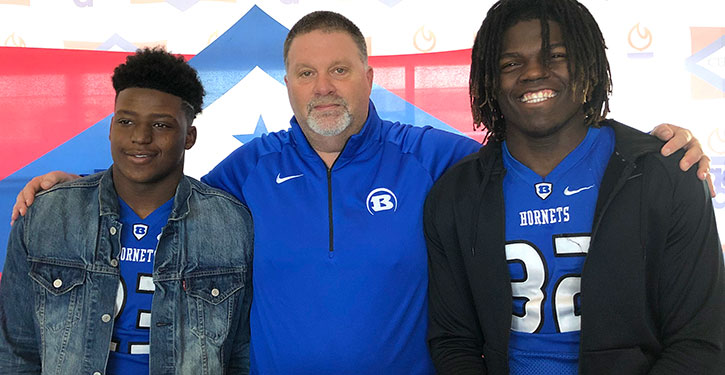 Finishing where they started is finally a thing for Hornets

LITTLE ROCK — Since the Salt Bowl, the annual gridiron battle between Saline County rivals Bryant and Benton, was moved to War Memorial Stadium in Little Rock, every Bryant Hornets team has made it their goal to end the season where they started it.

There have been some great Hornets teams, but that mission has gone unaccomplished year after year, until now.

With their 28-7 win over the Fort Smith Northside Grizzlies on Friday night, the 2018 Hornets punched their ticket to the title game and will indeed end it where it started this Saturday, Dec. 1, at 6:30 p.m.

What stands between them and the school’s first State title in 69 years of football is as much a nemesis as the Hornets have had. The defending State champion North Little Rock Charging Wildcats will be playing in their third consecutive title game. Since losing to Fayetteville in the 2016 finale, North Little Rock has won 25 games in a row including a couple against the Hornets, 25-14, in 2017 and, earlier this season, 34-28, after Bryant held a 21-0 lead at the end of the first half.

Like the Hornets, the Panthers and the Warriors are planning on turning the tables.

Part of the State championship experience is a Monday press conference at War Memorial Stadium, something else that’s reminiscent of the Salt Bowl.

“Coming into the season, it just felt like — we just knew that this game was going to happen eventually, if we just played our cards right and just bought into what Coach James is doing,” Wallace said.

“I think it was right from the start, all the way from the Salt Bowl,” Scott added. “We were ready. There was always room for improvement. There still is. But I felt like we were ready. I felt like it was going to happen this year. I knew it when I first came.”

Scott moved to Bryant before his sophomore season from Stuttgart and has rushed for 3,178 yards since.

“They’re both special players in their own right,” James said of the duo, just two stars on a team full of them. “They play extremely hard. They’re good teammates. They’re the first ones to give credit to their teammates, very unselfish young men that, obviously, love the game.

“They love being leaders,” he continued. “Both lead in a little bit different way. Nate is a little bit more of a vocal leader, a little bit more hands on, where Latavion, it’s by his actions and really what he does on the game field. You don’t even know he’s at practice. He’s one of those guys that does enough to stay off the radar.

“Both of them lead and that’s what you want,” concluded the coach. “I tell them all the time, ‘Lead, follow or get out of the way.’ They do it by the way they practice, the way they carry themselves and their expectations for themselves. I think that’s the best qualities a good leader has.”

“Everybody being brothers,” Wallace said when asked what has made this team special. “It’s more than just teammates. It’s family. We’ve got each other’s back. We hold each other accountable. We just relate to each other. Whenever you’ve got good chemistry on a team and you love each other and trust each other, it’s no surprise we made it this far.

“Determination,” added Scott, “just wanting it more than the next person.”

The Hornets are glad to have the rematch even though no Bryant team has defeated a North Little Rock team since 2010.

“We were 21 up and people on the team just got comfortable,” Wallace said of the first meeting. “You cannot be comfortable in a game. Coach has always said, you’ve got to get comfortable being uncomfortable, so you can play when you’re up 21 like you’re down 21.”

“For me, they load the box up, make it harder for us to run,” Scott related. “It means that the game is going to be more in our receivers’ hands. They’re going to have to make big plays and make room for me to run, so they have to spread out the field, make them spread out.”

The Hornets’ offense has averaged 29 points and 372 yards per game.

“Them big boys, I love them,” Scott said of the offensive line. “They carry our whole team all the way. It all starts with the big boys up front. The d-line (of the other team), they don’t want to be out there. They want none of that.”

Defensively, the Hornets allow just 12.6 points per game and just 228 yards per game.

“We’re pretty influential in our season and we’re really been like the backbone of the team,” said Wallace, who leads the team in tackles for losses and sacks. “Really, it’s being put in the right places, the coaches making good calls putting me in the right places. It’s also just me wanting more to make the play and not just be there. I just try to rack up my stats, trying to get noticed.”

The Hornets set a new school record for sacks this season.

James took some time to reflect on coming to Bryant three years ago and getting the program to the finals. He acknowledged that the program was already on the cusp of making it.

“I just thought that, what we do is good as far as development of, really, toughness and focus on the little things,” he recalled. “I’ve said this, many times, they already had great football. I think the football at Bryant has been great. I just felt like that something fresh or new coming in here, and the strength and development part of it, a little bit more accountability on the kids. I thought maybe, just change something that would maybe give us a chance to be successful.

“I think Bryant’s had great football,” he reiterated. “They’ve been close. I remember Scott Reed telling me at El Dorado — you know, he played them, and we (at Camden Fairview) played them week one. I think he played Bryant week two and I can remember him telling me, ‘Those son-of-a-guns up there are tough, and they’ve got depth.’

“I knew then that this job was a goldmine,” he continued. “I thought it was a diamond in the rough. But he talked about how physical they were and how they just ran player after player out. I have a lot of respect for Scott Reed and, I mean, he dropped them (off the schedule). He said he’s not playing them. I just thought, when the job came open, I just thought it was a great job. And the Lord blessed me to get here.

“Then we had the right group of kids,” the coach said. “It took them a minute to buy in, but the first group bought in and that’s never happened anywhere I’ve gone. (Usually) the first group fought us all the way. These guys, the first group sort of fought us a little bit early but, to a man, they were bought in at the end. I knew we had a chance. If we could get it going 7 through 12, it gave us an opportunity to be able to have good football.

“With the northern schools splitting a little bit, helps a little bit, don’t get me wrong,” he acknowledged. “But I just thought the timing was right and it was a good opportunity for Bryant to get on the map as a football contender.”

“You’ve got to have good coaches,” he said. “You’ve got to have coaches that are dialed in to what my philosophy is as a head coach. Very unselfish men that do their job to the utmost of their abilities. It starts with those guys. I can’t do it by myself. Those guys do it. They live it. They walk it. They sleep it. They eat it. And they pour that into their kids. Tirelessly they’ve worked. The addition of Chris Jordan — he’s been with us the last couple of years — has helped me a lot because I was doing that pretty much by myself. It gave me a lot more opportunities to do other things. He’s been a blessing to us.

“The rest goes back to the kids of listening to a dream and a vision, and making it happen,” he continued. “To get here, it was a huge hurdle. Just getting to a playoff win was a huge hurdle then making it to the semi’s. And you get there two years and you can’t make it, and understanding that, hey, we’ve got to go back and work a little harder at this, and a little harder at that when they already thought they were working as hard as they could possibly work.

“And here it is,” the coach acknowledged. “Now the hurdle is to try to win this game. We’re playing a team that has the same vision and the same dream and they’ve been doing it for four years and have the same kind of coaches. And they have Dudes.

“We’re not going to try to make it as big as it already is,” said Scott. “I’m going to try to treat it as just another game, keep doing what I’m doing and hope my team is right behind me. I know they are.”

“We’re hungry to get this win,” added Wallace. “You can’t just come this far only to come this far. We want more. We want the ring. We want to make history, continue making history for Bryant High School. We’re just going to continue working until we’ve made a name for ourselves.”