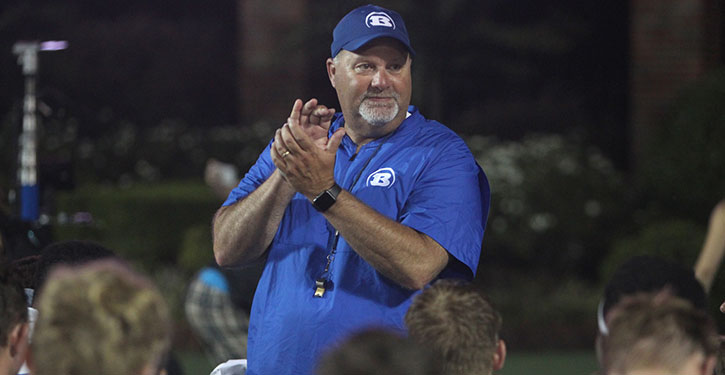 Football 2020 — a bit of normalcy in an abnormal year

One of Buck James’ favorite sayings is “Get comfortable being uncomfortable.”

“This has been a one for the books for sure,” said James, the head coach of the two-time defending State champion Bryant Hornets. “March 11th or 12th we’re told we’re gonna go home and we don’t see the kids again till June the 1st. We’ve been very limited in everything we’ve done through July. We start football and then they give us more restrictions and more obstacles.

“But, lo and behold, we’re here at the first game.”

There were times during the summer when that first game, the annual Salt Bowl between the Hornets and the rival Benton Panthers at War Memorial Stadium, seemed like it would not happen, of course. After the spring sports were shut down because of the coronavirus, crushing the seniors who had just started their last season in high school baseball, softball, soccer and track — all bets were off.

But as the cases in the state began to level off with folks doing whatever they could to do the right things — face masks, disinfecting, washing hands and social distancing — and concerns growing about the effects of shutting things down, it was decided to let the fall sports start.

And the Salt Bowl, the renewal of a rivalry that goes back to 1974, was back on, with restrictions regarding crowd size, sideline access and more.

“You know I’m excited for the kids,” James said. “And really I think our communities need normalcy. Our people want to be involved with their kids and they want to be involved in a senior year football. Our kids have been resilient and I’m really thankful that we got to this point and I hope that we can go further and do that.”

The layoffs had their effect.

“We’re not playing our best football right now but who is? And who wants to, you know?” the coach said. “We’ve got a chance to have a good football team and we got some great kids. I mean we’ve got some outstanding kids.”

The senior class hopes to win a third consecutive State title. Of the current schools in 7A only Fort Smith Northside (1966-68) and Little Rock Central (1952-57) have been able to do that. The last to do it at any level was El Dorado in 6A from 2009-11. Shiloh Christian, Nashville and Greenwood have accomplished three in a row in smaller classifications since the turn of the century.

“To win three State championships in a row is probably next to impossible at this level,” James said. “But the only thing about impossible is that most of the word spells possible.

“I want to have the chance you know and I think it’s only fair that they have a chance,” he added, but I would say the odds are stacked against them but these guys have worked their tails off since they were in ninth grade getting ready for this and this is their year. You want those kids to have that and you want kids all around the state in the nation to have it. To be robbed of it, it’s hard for them to wrap their heads around it.”

As others have said, James feels the players are safer regarding the virus under the supervision of the coaching staff.

“A lot of our kids get everything they need at home, but we have kids that don’t get everything they need at home,” the coach said. “I was one of those kids. I needed sports. I needed my coaches. I needed the structure. I speak for myself in that and I know if it had been for football I might be in jail or dead because I was going to compete and stuff. It was coaches and athletics that kept me on the straight and narrow, to really keep myself out of big-time trouble growing up. And I needed that.

“I’ve been in sports since I was in second grade. It’s important for me and I know it’s important for a lot of these kids. It’s not’s not life or death. It’s not the end all. You know I realize all that. There’s bigger things out there but it builds a great foundation for the rest of their life.”

August 28 in Bryant athletic history: 2013
Will Salt Bowl 2020 turn into a high-scoring shootout?