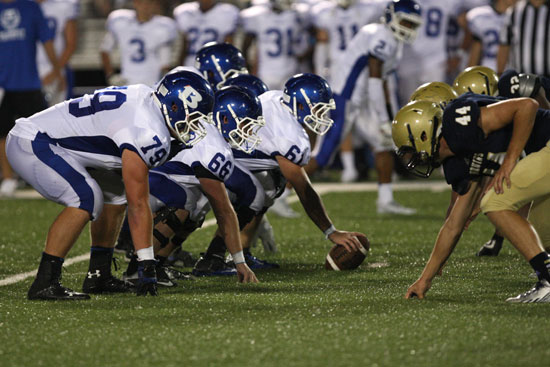 Hornets “hold their own” against top-notch programs in preseason scrimmage

The way head coach Paul Calley figured it, before they even started, Tuesday’s evening’s preseason scrimmage against the Fayetteville Bulldogs and the Pulaski Academy Bruins was a success for his Bryant Hornets. The defending Class 7A State champion Bulldogs and the Class 5A semifinalist Bruins — perennial statewide powers — were going to give the Hornets, no matter what the outcome, the kind of test the coach figured they needed going into a season opener against the Conway Wampus Cats. 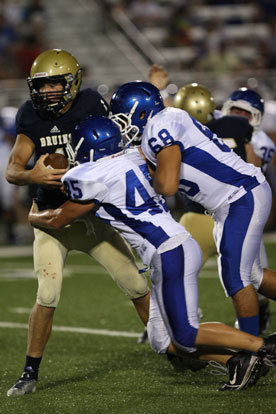 The Hornets played right with them.

“I was pleased overall,” Calley said. “We accomplished what we needed to. We got out of it healthy. We saw great competition. We saw multiple schemes. We saw play-action, spread, Wildcat, power running, you name it. Just about everything we’re going to see, everything we needed to see.

“There will be talented teams (ahead) but those two teams we played tonight are very talented football teams and ultra-successful football teams,” he emphasized. “I thought we held our own. Of course, we didn’t keep score and I gambled a little bit more than usual with field position and things like that.

“I feel like I’ve given us a lot better chance against Conway, week one, by doing what we did tonight,” Calley concluded.

The score wasn’t kept on the scoreboard but in two quarters against Fayetteville, the Hornets wound up on the short end of a 17-7 score. Fayetteville then out-scored Pulaski Academy, 17-14, in two quarters and headed back to northwest Arkansas. Bryant then came back to take on P.A. The Hornets rushed to a 21-0 lead. The Bruins scored late then the junior varsity teams played for 20 minutes with each scoring a touchdown. 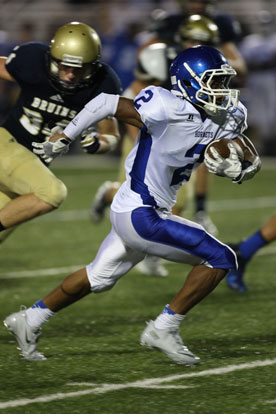 Bryant’s Brushawn Hunter sprints upfield one his way to a touchdown. (Photo by Rick Nation)

“I was very pleased with the first drive against Fayetteville,” the Bryant coach stated.

The Hornets drove from their own 30 to the Fayetteville 25 where a fourth-and-9 pass completion from junior quarterback Brandan Warner to Darian Jarrett picked up only 5.

It was the fifth completion of the drive by Warner who had a couple of others dropped. The Hornets ran it effectively with Brendan Young, Jarron Wade and Kylon Boyle working behind their veteran offensive line

“We held onto it for eight or nine minutes,” Calley noted.

Warner wound up completing 20 of 36 passes for 227 yards and three touchdowns without an interception in the two halves. Brushawn Hunter had 10 catches for 126 yards and one of the TDs. Young rushed 15 times for 64 yards altogether.

Fayetteville wound up scoring on its second and third possessions. Quarterback Mitch Marshall capped off both drives with scoring passes to Jordan Dennis of 18 and 32 yards.

Bryant answered the second touchdown with a scoring drive of its own, punctuated by Warner’s pass to Devonte Howard, who turned it into a 62-yard touchdown play.

The Hornets defense came up with three lost-yardage plays on Fayetteville’s subsequent possession but the Bulldogs made enough plays, particularly by C.J. O’Grady, playing quarterback and wide receiver, to reach the 2 where they capped off the half with a short field goal. 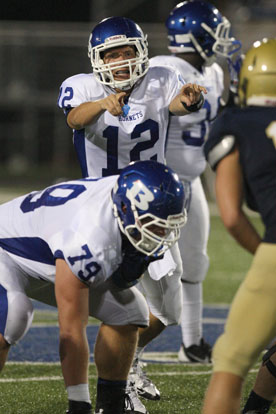 “We still had some stupid penalties at times that hurt us like on third downs,” Calley said. “They’re hustle plays but they’re dumb plays and we’ve got to eliminate those; blocking in the back, blocking behind plays, hitting somebody out of bounds. There’s a lot of things we can improve upon.”

Bryant’s defense shined against the high-octane offense of Pulaski Academy, putting a great deal of pressure on quarterback Will Hefley and passing some licks in the secondary.

“I was surprised,” Calley admitted, regarding his team’s pass rush against the Bruins, “because I know their style of offense, they see a lot of stuff. But we were able to get pressure. The thing we did is, when we got pressure — I remember Northside a couple of years ago when we got pressure on him but couldn’t touch him — but tonight, we got pressure, we got our hands on the quarterback, we knocked the ball loose, knocked balls down and that’s very encouraging.

“I thought we played the ball well in the air,” he added. “A couple of times versus Fayetteville, (O’Grady), a 6-foot-6 beast that made some great third-down receptions when we had him defended and there’s just no way to stop it.”

Though the Hornets didn’t take advantage right away, before the quarter was over, Warner and Hunter hooked up on a tunnel screen that not only converted a fourth-and-10 but broke for a 45-yard touchdown. Alex Denker added the extra point. 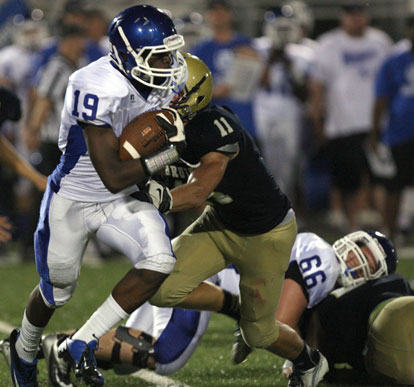 On the Bruins’ subsequent possession, Tanner Rich and Amador Gaspar sacked Hefley on first down and, on second down, Colton Burton sniffed out a PA screen, intercepted and ran it back for a score.

The next Pulaski Academy drive stalled at the Bryant 44 where, under pressure, Hefly couldn’t complete a fourth-down throw.

Bryant took over and, in nine plays, found paydirt again. Warner hit Hunter for the 20-yard TD strike, which came moments after Wade picked up a first down on a third-and-1 run, despite being hit in the backfield initially.

Burton had a sack and a pressure one the Bruins’ next drive, which reached the Bryant 27. But, on fourth down there, Davis Nossaman and Bryce Denker put the pressure on Hefley who had to throw it away. 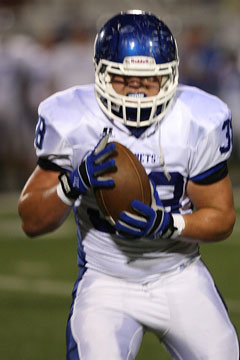 Colton Burton secures his interception on the way to a touchdown return. (Photo by Rick Nation)

Boyle caught a pass for 8 yard and made a 13-yard run to help the Hornets push out to the 42. Calley pulled his offensive starters at that point and a turnover led to Pulaski Academy’s 35-yard scoring drive, 25 of which came on the pass from Hefley to Will Hastings for the 6.

Bryant opened the extra period with a touchdown drive, keyed by runs from Boyle and sophomore Sevante Turner. Sophomore quarterback Gunnar Burks completed a pair of 16-yard passes, one to Demaja Price and the other to Evan Lee, to set up Turner’s 1-yard TD plunge.

Pulaski Academy scored on a 30-yard pass from Tre Bruce to Grant Pickle with 4:31 left, moments after a bad snap had cost the Bruins 26 yards.

On the last series, Turner sliced for a run of 15 yards then topped that with a 44-yard jaunt that reached the 11 only to have a personal foul penalty push the Hornets back to the 26. Three running plays later, the scrimmage was over.

The Hornets will have seven more practice days before traveling to Conway on Friday, Sept. 6.