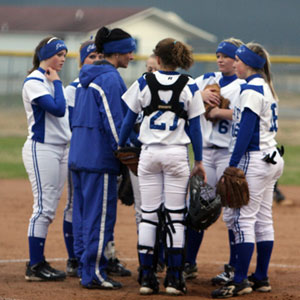 In their home opener on Monday, Feb. 23, the Bryant Lady Hornets made some noise with their bats and that was encouraging to head coach Lisa Stanfield. But now, she’d like to hear a lot more from her team in the field.

Freshmen Jessie Taylor and Peyton Jenkins each blasted home runs as part of an 11-hit attack that sparked Bryant to a 10-2 win over the Vilonia Lady Eagles on Monday.

But it wasn’t just the errors that had Stanfield concerned.

“For some reason, we just decided not to communicate during this game,” she stated. “It was just quiet. It was a new mix of defense but all of those guys have been out there before and I never would’ve expected silence. So, if we have to keep moving things around — because that’s a big deal. You’ve got to have communication. If (Vilonia) would’ve been hitting or their short game would’ve been any better at all, we could’ve been in real trouble. Especially when you’ve got runners on, you’ve got to talk and we weren’t.”

Vilonia had its share of miscues in the field as well, prolonging the second inning which developed into a six-run outburst for Bryant. [more] 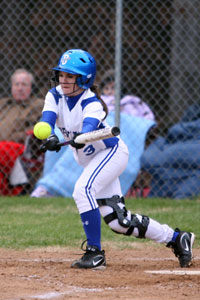 In the top of the inning, an error allowed Taryn Cassellani to reach base with one out. Bailee Allen bounced into a 4-6 force, hustling to beat the return throw and avoid the inning-ending double play. And when Britney Taylor and Scarlett Green followed with singles up the middle, the bases were full. But Jenkins got her counterpart, Michelle Hastings, to pop a sharp grounder to third where Jessie Taylor fielded it and stepped on the bag at third to end the threat.

In the bottom of the inning, Taylor, in just her second or third varsity at-bat ever, opened the bottom of the inning with a solo homer just inside the left-field foul pole to snap a scoreless tie. Sarah Hart followed with a single, Kayla Sory beat out a hit off the pitcher’s shin, and Cassidy Wilson cracked a single off the third-sacker’s glove to load the bags for Jenna Bruick. 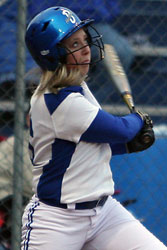 Paige Turpin tapped one in front of the plate and Wilson sprinted home as Turpin hustled to second. Kim Wilson rolled a sacrifice bunt toward first that allowed Bruick to score. Turpin followed moments later on a sacrifice fly by Christen Kirchner, making 6-0.

“I like that we took our mistakes from Benton and we had one good practice and worked on those things and were able to transfer it into game situations,” Stanfield stated, referring to the team’s 7-1 loss in its opener last week. “It’s kind of surprising. My younger ones are being patient at the plate. They aren’t overly aggressive and I’m real proud of that.”

In the top of the third, Carley Gaines reached on a throwing error reaching second. Shana Sanders got a nice sacrifice bunt down to move Gaines to third and she scored from there on a wild pitch. Lauren Rowland ingled and Savanah Rowland walked but Jenkins retired the next two to force the Lady Eagles to strand them.

In the fourth, Jenkins pitched around a two-out error that had Hastings on base and a single by Gaines that followed.

Meanwhile, Hastings settled down in the pitcher’s circle for the Lady Eagles and the 6-1 score held until the top of the sixth when Vilonia whittled a run off the lead and threatened to get more. Another error opened the door with Britney Taylor eaching base, advancing on a sacrifice by Green and scoring when Hastings’ single to right was misplayed.

A wild pitch and a groundout pushed the runner to third but she was stranded when Jenkins got pinch-hitter Haley Freeman on strikes.

In the bottom of the sixth, Bruick reached on an error, Turpin slapped a single to center and both moved up on Kim Wilson groundout to second. Kirchner singled in a run then worked a double steal with Turpin that produced another tally as Kirchner took second. Jenkins followed with a blast to left-center to make it 10-2.

Jenkins closed out the win with a 1-2-3 top of the seventh.

Sory and Jenkins each had two hits for Bryant.

May 1-4 — Class 7A State Tournament, Bentonville