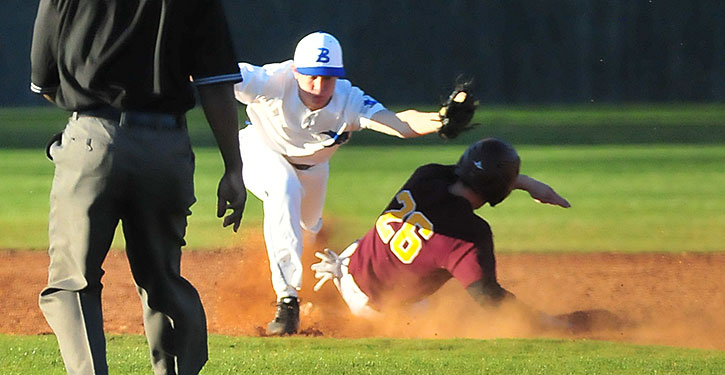 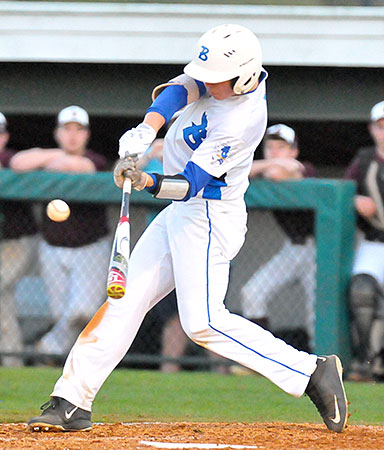 The pitching and defense were there, save one little hiccup, and, as a nice bonus, the Bryant Hornets hammered out 11 hits including three by sophomore Logan Chambers as they held the Lake Hamilton Wolves at bay in a 9-2 win in a pre-season game at BHS Field Thursday night.

Five Bryant pitchers limited the Wolves to just four hits. They combined to strike out nine with one walk.

Meanwhile, the Hornets scored in five of the seven innings.

“We’ve still got a long way to go,” said first-year Hornets head coach Travis Queck. “But we’re ecstatic we got a ‘W’. We’re going to take every ‘W’ we can.”

Scott Schmidt added two hits as all but one starter got in on the offensive production.

On the mound, ace Beaux Bonvillain started and surrendered a pair of tainted runs on three hits with the lone walk and four strikeouts. Seth Tucker pitched two scoreless frames and gave up the last Lake Hamilton hit in the fourth. 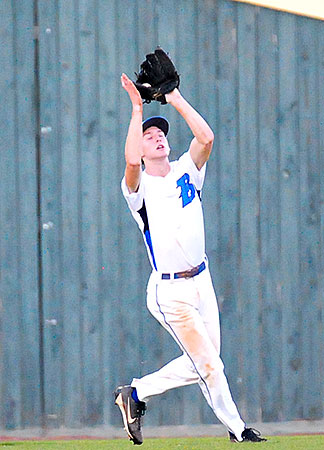 Matthew Sandidge hauls in a fly to center. (Photo by Kevin Nagle)

That runner was thrown out trying to steal by catcher Jake Wright.

Coby Greiner, Myers Buck and Will McEntire finished up without allowing a single base-runner over the last three innings.

The lone runs for the Wolves came in the opening frame. Kirk Shildgen led off with a single to center but was forced on a comebacker to Bonvillain. Korey Wasson beat out an infield hit then both moved up on a passed ball after Utah Aitken struck out.

A walk to Zach Ross loaded the bases. Bonvillain picked off Ross but he stayed in the rundown then got back to first as both runners scored.

Bonvillain fanned Braydn Clark to end the inning and the Hornets were splendid on defense after that. 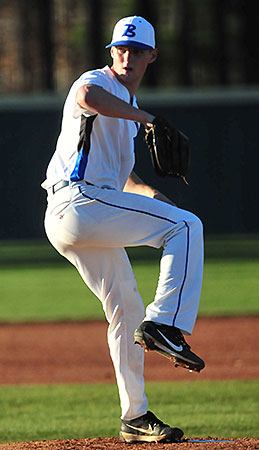 “We work on that play all the time,” Queck asserted, with a shake of his head.

The Wolves were unable to get another runner to second the rest of the game.

Bryant got the two runs back in the bottom of the inning. Tucker reached on a throwing error to start things off. He stole third as Ross, the Lake Hamilton starter, fanned the next two. Wright kept the inning alive by earning a walk. An errant pickoff throw allowed Tucker to score and courtesy runner Grant Logan raced all the way to third. A pitch later, Chambers slapped a single to left to bring him home.

“We got some timely hitting,” Queck noted. “Some guys really showed some backbone there; guys that I knew had it in them and I expect a lot from this year.”

The Hornets loaded the bases in the second but couldn’t snap the tie. In the third, however, Chambers led off with a double to left-center. Greiner sacrificed him to third and Bonvillain picked up the RBI with a grounder to the right side.

Tucker struck out a pair in the top of the fourth and the Hornets added on in the home half. Schmidt worked a one-out walk, took second on a wild pitch and raced home when Cameron Coleman drilled a triple. With two down, Chambers came through again with an RBI single to make it 5-2. 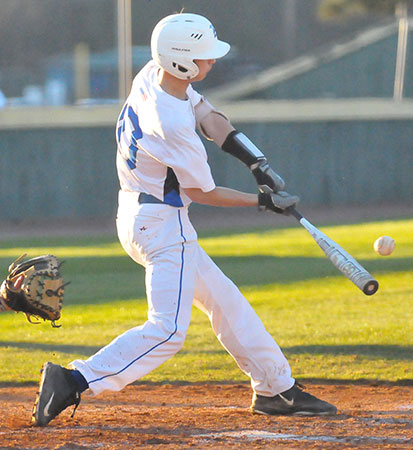 Greiner needed just 10 pitches to get through the fifth inning then Buck used just nine tosses to set down the Wolves in the sixth.

The Hornets blew the game up in the home sixth with the help of a couple of Lake Hamilton miscues. Wright got it started with a two-strike, two-out single up the middle. Chambers rapped a grounder to second that drew an errant throw to first, putting runners at second and third for Greiner. He lofted a fly to shallow right that was misplayed allowing both Grant and Chambers to score, making it 7-2.

After Greiner swiped second, Bonvillain cracked an two-strike single up the middle to chase him home.

McEntire eased through the top of the ninth, fanning two. 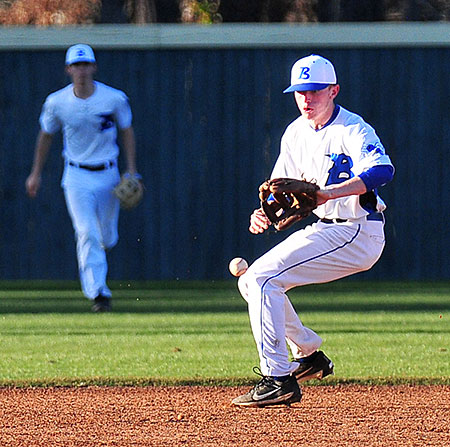 So that Lake Hamilton could use one more pitcher and the Hornets could take one more at-bat, the teams played the bottom of the seventh.

Tucker singled with one out, stole second and advanced to third on Schmidt’s second hit. A wild pitch allowed Tucker to score the final run as Wright drew a walk.

The Hornets made their official season debut on Monday (weather permitting) as they host Arkadelphia.