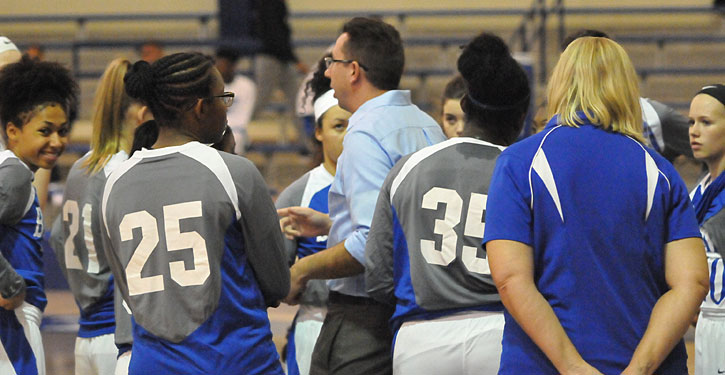 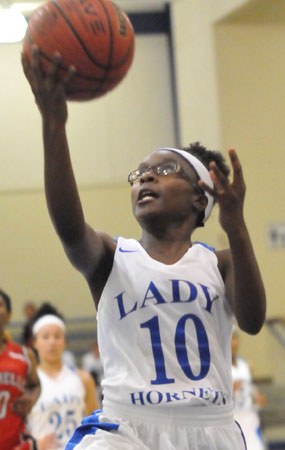 Tierra Trotter converts a layup after one of several steals Monday night. (Photo by Kevin Nagle)

Take a team that went undefeated as eighth graders, add in more good players from the eighth grade team from Bethel Middle School plus a pair of top-notch move-ins and you’ve got the kind of team that can run out to a 24-2 lead, wind up playing everybody, on the way to a 55-22 victory with the mercy rule in effect at the end.

“We jumped out quick and we were able to get what we wanted out of the first three minutes,” said Lady Hornets coach Nathan Castaldi.

“From there, we were able to work on some things and get what we needed out of tonight,” the coach added. “That’s what tonight was for, to make sure to give everybody a look against somebody with another jersey on and see what they do when the lights go on. So it was good that everybody got some time out there.”

Twelve of the 16 players that got into the game for Bryant contributed to the scoring, led by Sierra Trotter with 14 and Ivory Russ with 13 in limited time. 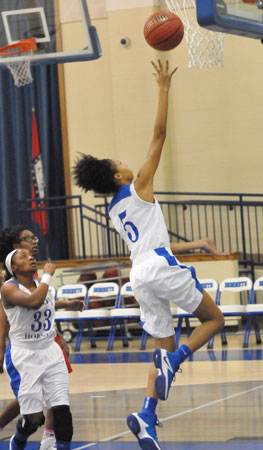 A lot of the scoring came in transition. Though they didn’t press much after building the big lead, the Lady Hornets forced 28 Maumelle turnovers.

“They play so well in transition that they get easy buckets, which makes offense just come naturally to them,” Castaldi said.

Russ hit a layup off the tip to get things started. After the first Maumelle turnover, she added a basket off an inbounds play. Celena Martin’s layup made it 6-0 then Trotter made a steal and hit another layup to make it 8-0.

Maumelle’s Jordan Gribbs-Dock broke the ice with a basket with 4:46 left in the first quarter but if failed to slow down the onslaught.

Russ hit a baseline jumper then contributed a three-point play off an offensive rebound. Moments later, Trotter made a steal that led to another three-point play and a 16-2 advantage. She would add a 3 after a Maumelle miss.

So when Lexi Taylor, a move-in from Bergmann, was fouled shooting a 3 and stepped to the line to make all three with 2:25 left in the first period, it was 22-2. 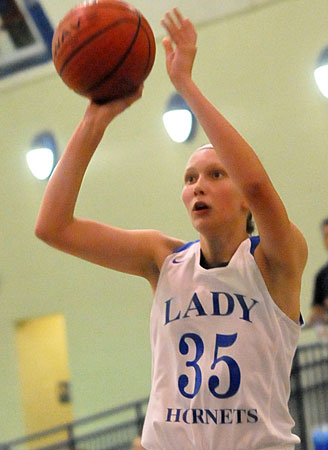 Before the half was over 14 of the Lady Hornets had played. Early in the second quarter, Mekeycia Baker scored and was fouled. Her free throw wouldn’t go but the lead was 24-2.

A 3 for Maumelle’s Kamryn Ramsey sparked a run for her team. But the lead was never less than 16 in the first half. Baskets by Jada Deaton and Kinley Oholendt offset some of Maumelle’s momentum.

The lead was whittled to 28-12 before an offensive-rebound basket by Truli Bates and a pair of layups off steals by Trotter pushed the margin back to 22, 34-12, at the break.

Bryant’s opening salvo in the third quarter put the lead in mercy-rule territory. Russ got two quick baskets, Trotter made yet another steal and layup then Taylor drained a 3 to make it 43-12. After a timeout, Trotter swiped the ball again, which led to a 3 from McKenzie Muse, a post player that moved in from Maumelle.

It was a 34-point lead and Castaldi called a timeout to get another group of players in. Tiyanna Robinson and Kendall Scott scored before the quarter was over. It was 50-19 going into the fourth. 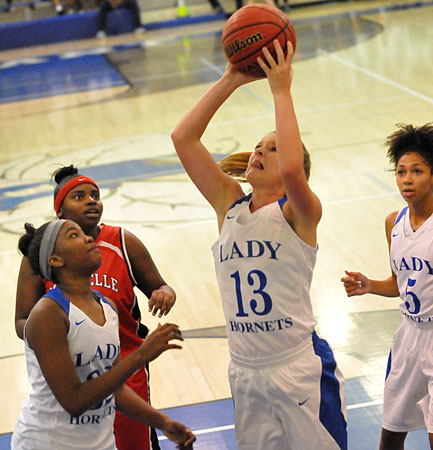 Robinson hit a pair of layups down the stretch as the lead grew to 54-21. Free throws by Gribbs-Dock for Maumelle and Sierra Trotter in the final minute completed the scoring.

“I think we saw what we expected,” Castaldi said. “A couple of our post players, I thought, gave us some good things that we haven’t maybe seen in practice. They did some things that were good. I think our guards played kind of like I expected.”

After scrimmaging for a few minutes at tonight’s Tip-Off event at Bryant Middle School, the Lady Hornets officially open the season at Searcy this Thursday.