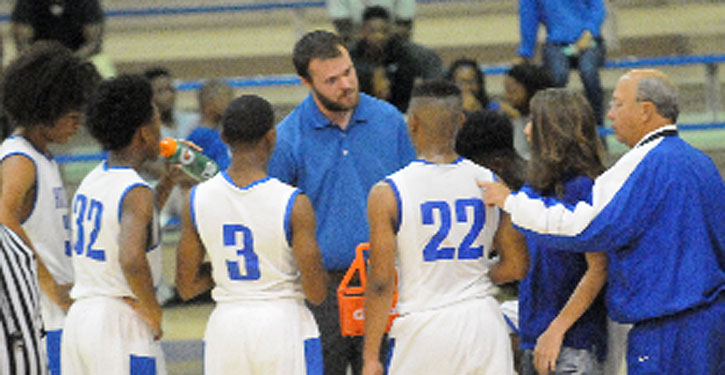 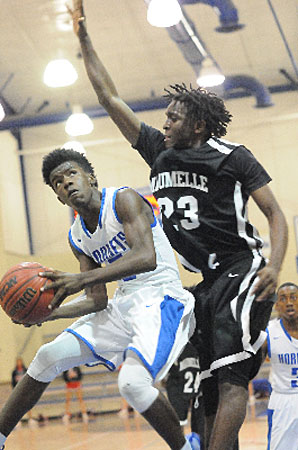 O.J. Newburn scored all 5 of his points in the final 1:30 including three clutch free throws as the Bryant Hornets freshman team surged past the Maumelle Hornets, 42-38, in a preseason benefit game on Monday night at Bryant Middle School gym.

It was a good test for both teams but Bryant made plays down the stretch to gain the upper hand then held on at the end.

Nine of the 11 players that got into the game for Bryant contributed to the scoring with Marquelle Barnes leading with 8 points and Colby Washington adding 7. Kayleb West and Logan New pitched in with 6 apiece to go with Newburn’s 5 and 5 more from Cade Drennan.

The teams traded surges and the lead much of the way. Maumelle led 28-27 on a basket by Jathon Mills to end the third quarter.

To start the fourth, Washington went to the line but missed the front end of a one-and-one opportunity. But Drennan rebounded — one of his team-high seven caroms for the game — and got it Darrick Rose who fed Washington on a nice drive-and-dish. This time, Washington scored as he was fouled.

Though he missed at the line, the basket put Bryant ahead to stay. 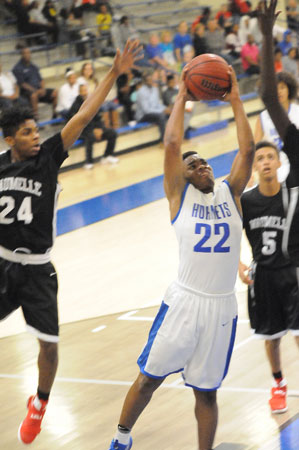 Mills missed a chance to put his team back ahead when he came up empty on two shots at the free-throw line. A driving jumper by New extended the margin to 31-28.

Maumelle’s Courtney Lawrence hit a free throw with 4:16 left to make it a 2-point game but Rose scored and was fouled. When his free throw rimmed out, Rose scrambled for the rebound and New cashed in with a layup.

After a Maumelle timeout, New got to the line again and this time converted twice as the lead ballooned to 37-29.

But sparked by Tre Flowers, who led all scorers with 16 to go with seven boards, Maumelle whittled the margin to 37-32.

Bryant ran some clock before Newburn found himself open on the baseline and calmly drained the 12-footer. Washington and Rose combined on a steal but Newburn missed a 3.

Maumelle regained some of the momentum when Flowers came through with a three-point play off a drive. Leading 39-35, Bryant worked the clock down to :15.2 left and head coach Tyler Posey took a timeout. 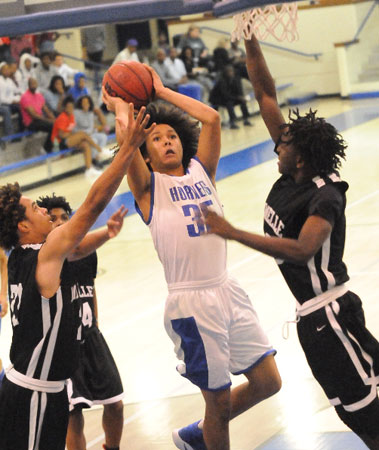 Ethan Hilkert goes up for a shot in traffic. (Photo by Kevin Nagle)

When play resumed, Newburn was fouled. He converted once only to have Mills pop a 3 to get Maumelle within 40-38 with :08 left.

Newburn was fouled again with :05.8 to go, putting the game away with two conversions at the line. He then blocked a 3-point try at the buzzer.

“They are a very hard-working team and I know we’re going to make the proper adjustments,” said Posey of his team. “These guys are absolutely one of the best working teams I’ve ever had. They’re willing and I know they’re going to fix their mistakes. They go full speed. They go hard. And getting them in game situations really helps them build.

“I was just hoping that we could get into kind of a rhythm early, try to get used to playing full-speed basketball,” he related. “Game mode is a little bit different than practicing. They started responding in the fourth quarter.”

Barnes’ three-point play opened the scoring in the game as Bryant jumped to a 5-0 start. Ethan Hilkert and Barnes each added free throws. 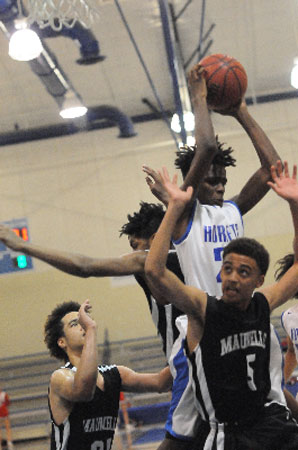 Colby Washington comes down with a rebound between two Maumelle players including Nathan Mills (5). (Photo by Kevin Nagle)

But Maumelle scored the next 7 points to take the lead with Flowers and Jayvian Menifee nailing 3’s. A Bryant turnover game them a chance to add on but New made a steal and fed Barnes for a basket that tied it.

A free throw by Javon Hale gave Maumelle an 8-7 edge going into the second quarter.

Drennan hit a layup and Jonathan Hall scored inside to make it 11-8. Maumelle tied it at 11 and the game was knotted 14-14 at the half.

Maumelle started using a zone in the halfcourt and a variety of presses in the full court as the third quarter unfolded. At first, Bryant’s Kayleb West burned the zone for back-to-back 3’s that created a 20-14 lead.

But Maumelle used their defenses for a 7-0 surge that had them up 21-20. An offensive-rebound basket by Washington put Bryant back on top but Flowers and Lawrence scored consecutively to create a 25-22 lead for Maumelle.

Washington and Mills traded free throws before Bryant surged into the lead again. Barnes converted a pair of free throws and Washington scored inside to give Bryant a 27-26 edge. But Mills drove for bucket with :20 left in the quarter and Maumelle had the 28-27 advantage that it would take into the fourth quarter.

The freshman team will participate in the Tip-Off Classic tonight before traveling to Searcy on Thursday to officially open the season.