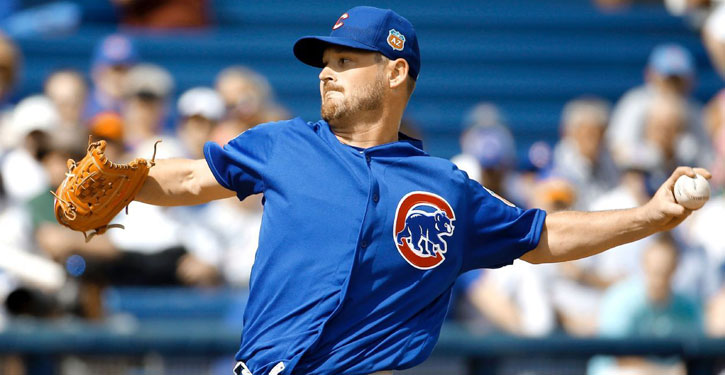 Celebration to honor Cubs’ Wood on return home to Bryant

The City of Bryant and Bryant Public Schools will host a Homecoming Celebration to welcome home its native son and 2016 World Series Champion of the Chicago Cubs Travis Wood.

The City of Bryant will host a Pop Up Reynolds Road event between 3rd and 4th Streets from 11:30 a.m. to 6 p.m. The event encourages residents to celebrate, eat, shop and experience the Heart of Bryant. Food vendors David’s Burgers and Jordan’s BBQ will be set up and Stated Apparel and Everett Buick GMC will be giving away a limited quantity of t-shirts on a first come, first serve basis, after those shirts are gone, the Bryant Boys and Girls Club will have commemorative t-shirts available for a donation to the Club. If you are interested in participating in the Pop Up Reynolds Road event, contact the Mayor’s office at the City of Bryant, 501-943-0999. For commemorative t-shirt information, contact Debbie Broadway at 501-765-7178.

Wood and his family will join the festivities for a parade in his honor that will begin at the site of where he began his baseball career as a kid, Ashley Park. The parade will begin at 5 p.m., and leave from Ashley Park, which is next to Bryant City Hall and will end at Bryant High School. Participants in the parade will be Wood, his family, his former coaches, Bryant Athletic Association baseball state and regional championship teams, as well as the Bryant Band, Dance Team and Cheer squads as well as the Saline County VFW Post 2256.

Following the parade, a ceremony will be held prior to the start of the Bryant Hornets vs. Springdale Bulldogs playoff game at Hornet Stadium beginning at 6:30 p.m. Gov. Asa Hutchinson, federal officials, the Saline County Legislative delegation, County Judge Jeff Arey, Mayor Jill Dabbs and the Bryant Hall of Honor will each have presentations to make to Travis and his family.

“We have three great reasons to come together as a community and celebrate on Friday. First to honor and celebrate our brave veterans, second to welcome home a World Series Champion, and third to cheer on the Hornets as they begin the playoffs,” said Dabbs.

“We invite everyone, not just the Bryant community to join us to celebrate this wonderful achievement. To have a graduate of Bryant High School be a part of history is very special, it’s not every day that someone from your community has the chance to be a part of an amazing event that has captivated the entire country. We hope that you will join us to celebrate a great young man and his family,” Dr. Tom Kimbrell, Superintendent of Bryant Public Schools

Former Speaker of House and State Senator Shane Broadway will serve as the emcee of the ceremony at Hornet Stadium.

Travis Wood, a 2005 graduate of Bryant High School, is the son of Jay and Dena Wood, he and his wife Brittany have two children. Travis was a selected to the Major League All Star team in 2013, and now is a World Series Champion in 2016 with the Chicago Cubs.