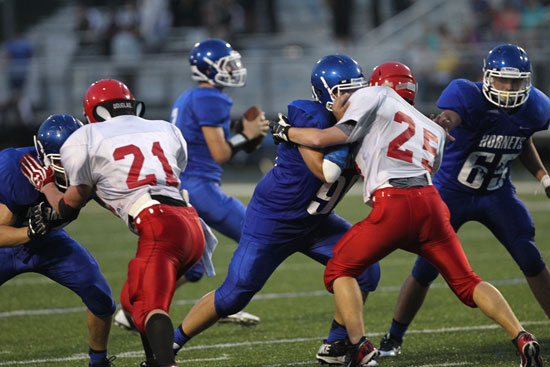 Leading 8-0 and just after making a defensive stand inside their own 15, the Cabot North Junior Panthers and pushed out to the 31 picking up a first down on a 5-yard run by Easton Seidl with about four minutes left in the first half. 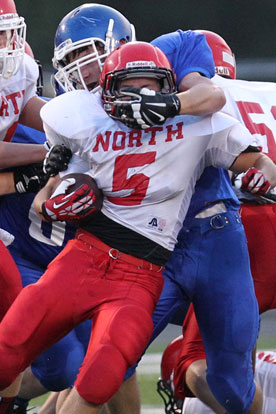 It was the third first down for the big, physical Panthers offense and it came with about four minutes left in the first half.

Little did anyone know at the time but that first down would be the last of the game for Cabot North.

Sparked by tremendous defense and a pair of long punt returns by Devon Davis, the Bryant Hornets freshman team surged to a 20-8 victory on Thursday night at Bryant Stadium.

Yes, the Hornets held Cabot North to only three first downs — and one of those came on a rare pass that actually produced the Panthers’ lone touchdown — and a net of just 60 yards of total offense. In 32 rushes, Cabot North picked up 50 yards, an average of less than 2 yards per attempt.

“That’s hard to do,” acknowledged Bryant coach Kenny Horn. “I thought our defense played well. We shut them down when we had to. In the first quarter, we gave up some bone-headed stuff that cost us but we fixed that stuff pretty quick on the sideline.”

The two teams traded punts for most of the first quarter with Cabot picked up a huge field advantage. It might’ve been worse but on his first attempt Bryant punter Austin Kelly did a great job of tracking down a high snap inside his own 10, scooping the ball up and running clear enough of the rush to get a punt away.

A big third-down stop by London Taylor forced a Cabot punt but, moments later, Bryant quarterback Beaux Bonvillain was sacked on third down forcing Kelly to boot it away again. 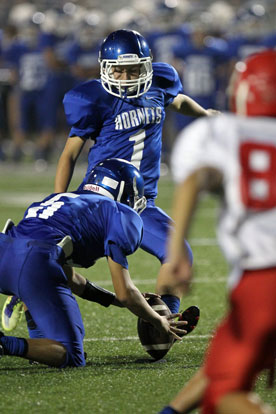 Chase Kincaid (1) boots an extra point out of the hold of Landon Smith (5). (Photo by Rick Nation)

This time, a short kick gave Cabot North possession 33 yards from paydirt. Even after the Panthers’ longest run of the night, a 20-yard burst by Kaleb Schmidt, they wound up facing a fourth-and-9 at the Bryant 10. That was thanks in large part to a second-down stop for no gain by linebackers Hayden Knowles and DeAmonte Terry. On third down, Cabot tried to pass but Bryant’s Marvin Moody put the pressure on Cabot North quarterback Bryson McCall and knocked down his pass.

But on fourth down, running back Seidl snuck out the backfield and into the left flat where he hauled in a McCall toss at the 5 on his way into the end zone.

It was the lone official pass completion of the night for the Panthers though McCall flipped a pass to tight end Jack Teague for the 2-point conversion.

Bryant responded when Phillip Isom-Green broke a 47-yard run on the very next snap. Cabot North cornerback Michael Fredrick made a touchdown-saving tackle at the 13.

And, as it turned out, it truly saved a touchdown. The Hornets got to the 10 but when a fourth-down pass fell incomplete, the Panthers took over on downs. Three runs by Seidl produced that final first down. Chase Fox stopped Schmidt for a loss and, a play later, Moody led the charge as the hulking Seidl was held for no gain on a third-and-3.

The Hornets forced a punt but, on the return, Kelly had his face mask yanked, fumbled and Cabot North recovered. Despite protests from Horn and his staff, the penalty apparently went unseen.

That’s where the defense took up the challenge. Nathan Mayes brought down Fredrick for a loss. Knowles stopped Seidl in his tracks and, on third down, the Hornets benefited from a fumbled snap that McCall was able to cover. 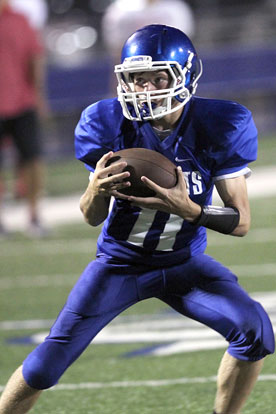 That brought about another punt by Seidle and, as it turned out, another fumble on the return, this time by Davis. Cabot recovered but the Panthers had done the Hornets a favor prior to the fumble. A holding penalty negated the play and the Panthers had to punt again.

This time, Davis caught the kick on the run at his own 28 and streaked up the left sideline 30 yards to the Cabot 42.

With just 1:34 left in the half, Bryant put together a nifty touchdown drive, using its timeouts along the way. The big play came on a fourth-and-7 from the 39. Bonvillain, who had seen his first seven passes fall incomplete, found Kelly who turned it into a 14-yard gain and a new set of downs.

On the same play, the duo combined for 11 yards to the 14. And when Bonvillain tried to get it to Kelly a third time, this time in the end zone, a pass interference penalty against the Panthers gave Bryant a first-and-goal at the 7 while also stopping the clock with :35 showing.

With that much time, the Hornets, though they were out of timeouts, could still go run or pass. And a give to Isom-Green resulted in a touchdown.

“Coming back after the first quarter to punch it in there right before the half, that was really big,” Horn allowed.

Bonvillain, after his early struggles, wound up completing four of his last five passes in the game including a pair of touchdown tosses. 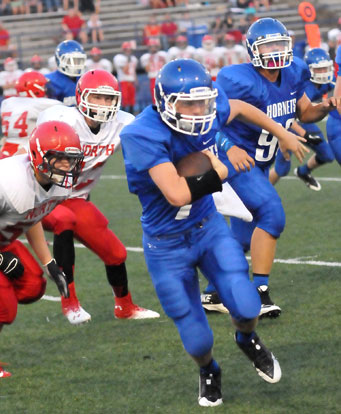 The second half began with Cabot North going three-and-out. This time, Davis hauled in the punt and galloped 33 yards to the Panthers’ 22. A play later, Bonvillain found Kelly down the left seam. After making the catch, Kelly cut back against the grain then lowered his shoulder to muscle into the end zone.

Suddenly, with 4:43 still remaining in the third quarter, Bryant held a 13-8 lead. A try for two failed.

“Two good punt returns by Devon Davis got us close,” Horn noted. “We got the short porch, stuck them in and held onto it.”

Three Cabot running plays produced eight yards. On a fourth-and-2 at their own 23, the Panthers lined up to punt but ran a fake with a snap to Seidl who had been doing the punting but had set up as an up-back this time. Terry and Knowles led the chargem bringing him down a yard shy of a first.

Given the great field position, the Hornets cashed in with a clinching touchdown, a 25-yard pass from Bonvillain to Jake East, who made the catch at about the 10 and scooted down the right sideline, diving into the end zone with :19 left in the third quarter. 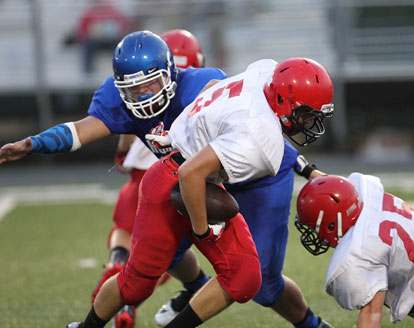 “I thought the offensive line played a lot better tonight,” Horn commented. “We blocked well. We didn’t run the football a whole lot but we still protected well and had time to throw it.”

“I thought overall tonight, everybody played well,” he concluded.

Cabot North had two possessions in the fourth quarter but was forced to punt on the first one as Moody knocked down another pass and Terry made a tackle for a loss. On the second, Taylor and Sebastian Hinestroza made big stops and, on fourth down, Terry knife through and drilled McCall, forcing a fumble that, though Schmidt recovered, allowed Bryant to take possession on downs with 1:53 left.

Now 2-0, the Hornets freshmen travel to Lake Hamilton for their next challenge on Thursday, Sept. 19. 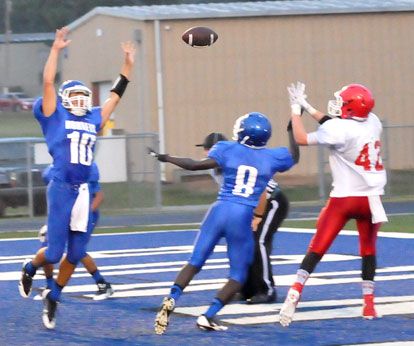 Bryant’s Austin Kelly (10) and Caylin Allen (8) try to get to the pass that found Jack Teague (42) for Cabot North’s two-point conversion. (Photo by Kevin Nagle)