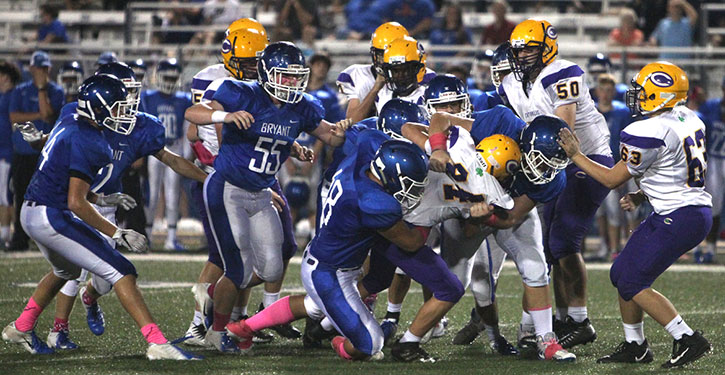 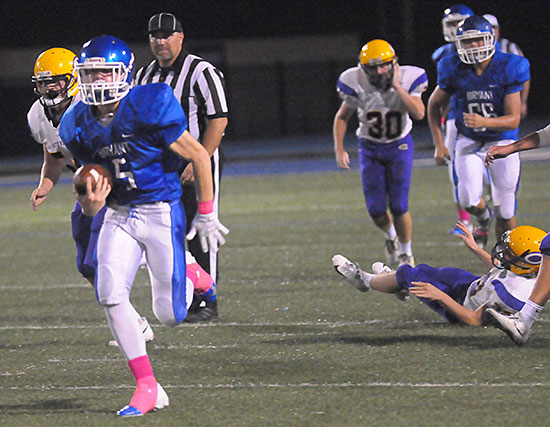 Carson Burnett leaves everyone behind on his 75-yard touchdown run. (Photo by Kevin Nagle)

While amassing over 400 yards of offense, the Bryant Hornets freshman team allowed just 27 yards as they extended a rugged season for the Little Rock Catholic Junior High Rockets Thursday night, 29-0, at Bryant Stadium.

The Hornets improved to 4-2 overall and 3-2 in the Central Arkansas Junior High Conference. The Junior Rockets remain winless on the season.

Running back Fabian Torres rushed for 161 yards and two touchdowns on just 10 carries and quarterback Carson Burnett added 117 yards and two scores on just nine tries while completing 3 of 3 passes for 63 yards in the rout.

The Hornets starters played one snap on offense in the second half. It was Torres’ 53-yard touchdown bolt.

Austin Williams picked up another 69 yards on 13 tries with the Bryant reserves and had a touchdown run negated by penalty. 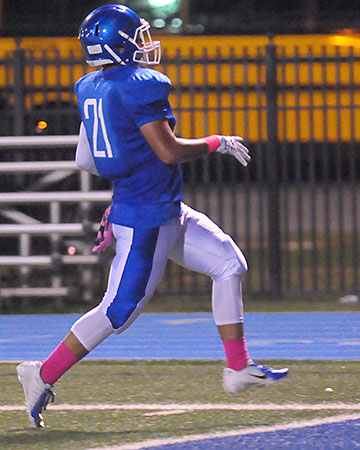 Fabian Torres steps into the end zone for one of his two touchdowns. (Photo by Kevin Nagle)

The Rockets managed a net of minus-3 yards of total offense in the first half without a first down. Their initial first down came via penalty late in the third quarter. They picked up a second one near the end of the game on a 12-yard pass from quarterback Anthony Stephens to receiver Carter Galbraith.

“We did what we needed to do,” acknowledged Hornets coach Kenny Horn. “The mental focus was not real good. Just dumb stuff, dumb penalties — we’ve got to execute smooth and we didn’t do that.

“Fortunately, we were bigger than them up front and we could push them around and it showed,” he added. “We played hard for the most part and did what we wanted to do this week. We just didn’t do it as good as we’d liked to have done it.”

Torres got the game started with a 17-yard burst. Two plays later, he scored from the 25 but an illegal block along the way negated some of the run. He followed with an 18-yard gallop to the 1 and scored from there on the next snap. Burnett ran in the two-point conversion. 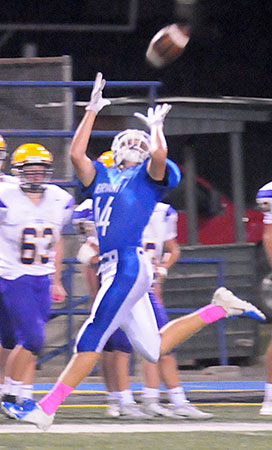 Turner Seelinger looks back to haul in a pass that went for 58 yards only to be negated by penalty. (Photo by Kevin Nagle)

The Rockets punted Bryant back to its own 12. After a shovel pass from Burnett to Andrew Stueve went for 15 yards, a bad snap cost the Hornets possession and the Rockets got it 35 yards away from a touchdown.

But defensive tackle Will Diggins dropped Davis Ford for a loss of 7 on second down and, moments later, Catholic’s Grant Hodge was punting again.

Back at their own 18, it took the Hornets three plays to score. The touchdown came on a 75-yard keeper by Burnett. Torres ran for 2 and it was 16-0 with 7:01 left in the first half.

The Rockets went nowhere in three plays and booted it back to Bryant. From their own 12, the Hornets put together another scoring drive. A 58-yard pass from Burnett to Turner Seelinger was negated by a penalty but Torres rolled for 24 yards and Burnett came back to Seelinger for a 26-yard completion to the 35.

Burnett’s second touchdown came from 13 yards out. Stueve kicked the extra point to make it 23-0.

A six-yard loss on a tackle by Brandon Jones undermined the Rockets’ final possession of the half.

Their frustrations continued as the second half got underway. A three-and-out led to another Hodge punt. Lawson Speer returned the kick 12 yards to the Bryant 47. Torres raced to the end zone on the first play there and it was 29-0. 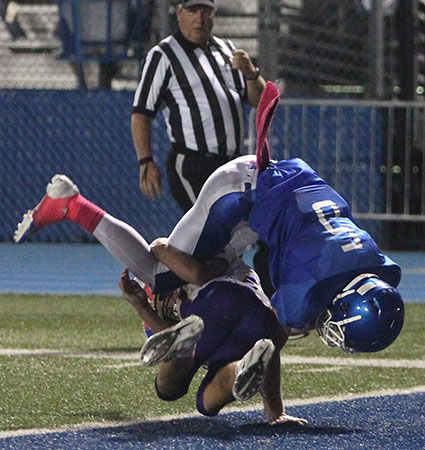 Carson Burnett is upended as he crossed the goal line Thursday night. (Photo by Rick Nation)

Another three-and-out led to the reserve offense taking the field for the Hornets, who wound up punting for the only time in the game. Burnett unloaded with a 50-yard kick.

A pass interference penalty produced Catholic’s initial first down but, on the last play of the third quarter, the Rockets punted again.

The Hornets, with Williams running behind the second o-line, drove from their 34 to the Catholic 21. On a fourth-and-6, Williams broke his touchdown run only to have half of it negated by penalty. Another fourth-down carry was stopped, and the Rockets took over.

Despite the first down on Stephens’ pass, the next four plays accounted for 1 yard. They wound up turning the ball over on downs with :15.9 showing.

The Hornets take a break from conference play next Thursday. They’ll play at Little Rock Central, a prospective member of the league which is playing a schedule against the entire CAJHC.

After that, the Hornets will face league co-leaders Cabot South and Conway White over the next two weeks, both on the road before finishing up at home against Benton. 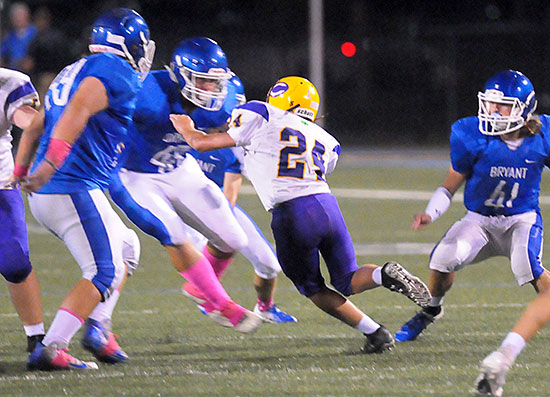 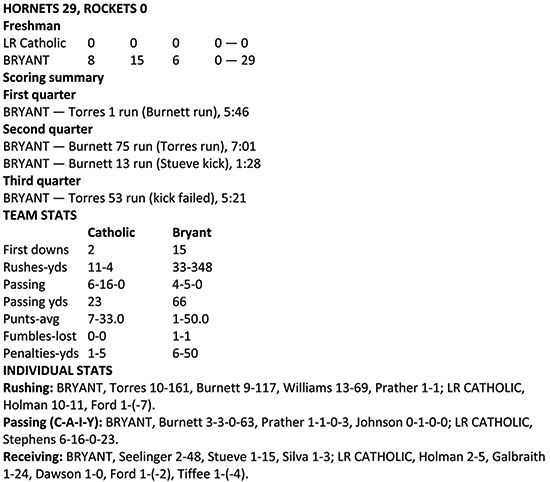