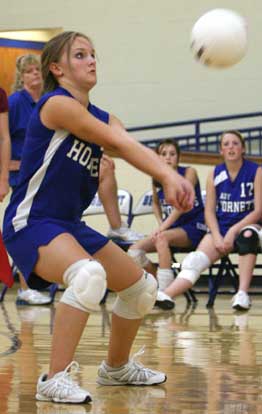 Improving to 12-3 overall and 9-2 in divisional play, the Lady Hornets go into their final three regular-season contests atop the standings.

They were set to travel to Lake Hamilton on Monday, Oct. 5 before hosting Conway Blue (one of the teams that has beaten them this season) on Thursday. They wrap up the regular-season campaign on Monday, Oct. 12, when Cabot South visits.

Bryant won in two after needing three games to extract victories in two of its last three outings. In both, they faltered in the second game.

“I have been taling to the team all week on what has been happening during our second games,” noted head coach Monica Parish. “We have been working hard on focusing during this time and it paid off at North Little Rock.”[more]

In the first game, Brooke Howell served during a key stretch of the game as the Lady Hornets picked up points 9 through 13. Courtney Davidson closed out the first game starting with point 19.

In the second game, Hannah Rice got the Lady Hornets off to a fast start serving for the first four points.

“Hannah had one of her best setting matches,” Parish noted.

“The other key for us was a combination of consistent, aggressive play at the net with blocks,” added the coach. “The North Little Rock hitters got a little discouraged.

“No player for us had more than two or three kills or blocks but all of them contributed, to make this a consistent attack on every rotation,” she added.

Looking ahead, Parish mentioned, “I believe the next two matches will be huge for us.”