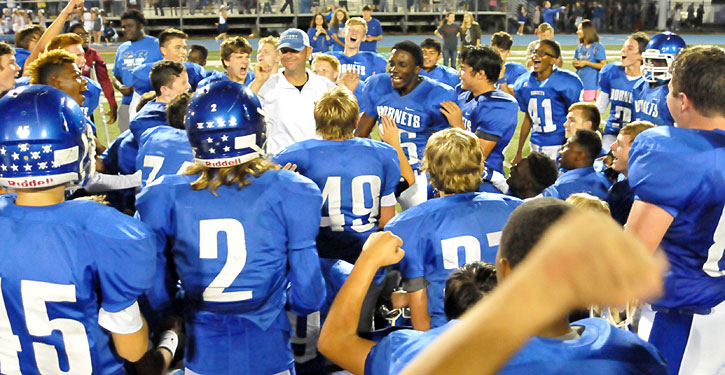 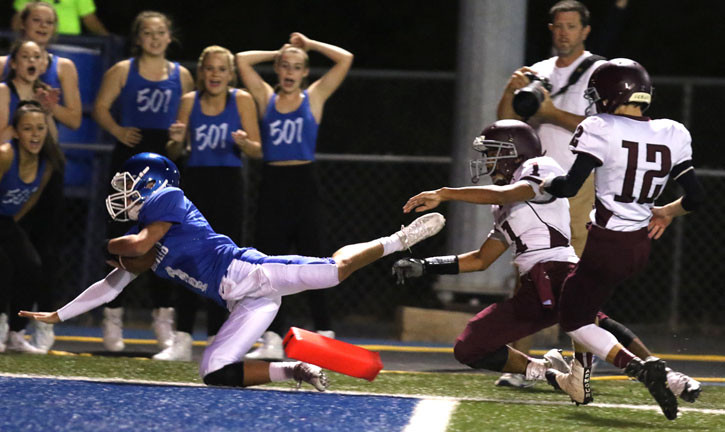 Jake Meaders dives into the end zone at the end of his 39-yard run. (Photo by Rick Nation) 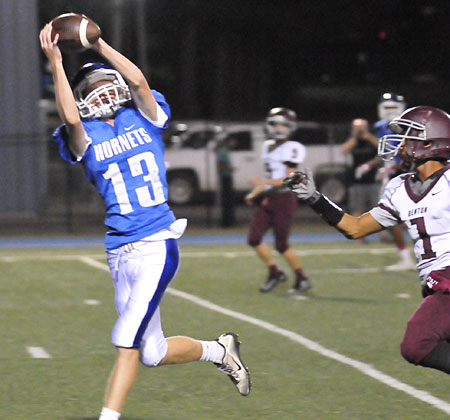 Gage Stark reaches up to haul in a touchdown pass. (Photo by Kevin Nagle)

Darrick Rose went back and got seconds. The Bryant Hornets took advantage then held off a late threat by the rival Benton Panthers to extract a 25-21 win and the championship of the Central Arkansas Junior High Conference.

It was the third year in a row that the Hornets freshman team has won the title but it’s the first time they’ve pushed through an entire season undefeated since 2011. The freshman win streak extended to 17 in a row over the last two seasons.

“We won them all this year and that’s tough to do,” stated Hornets head coach Kenny Horn who has led the freshman team to five league championships in his nine seasons at the helm. Horn’s teams are now 78-12 since 2008.

Benton came in flying high as well, undefeated in conference play and riding their own eight-game winning streak. 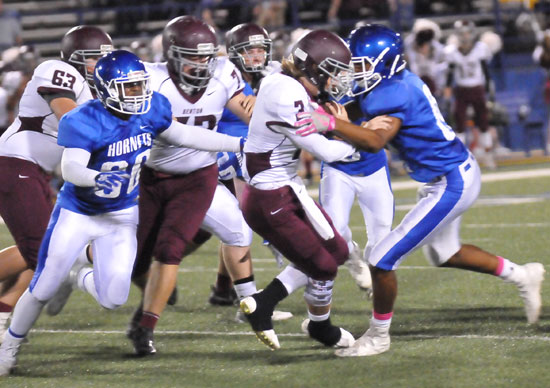 And it ended up being everything you could imagine a championship game should be. There were lead changes, big plays on both offense and defense, and the outcome was in doubt until the final minute in front of a big crowd at Bryant Stadium.

“Benton, they’re a good football team,” Horn said. “I was more concerned with us just staying on the field with them than I was anything. Boy, they’re good. But we made a few more plays than they did. 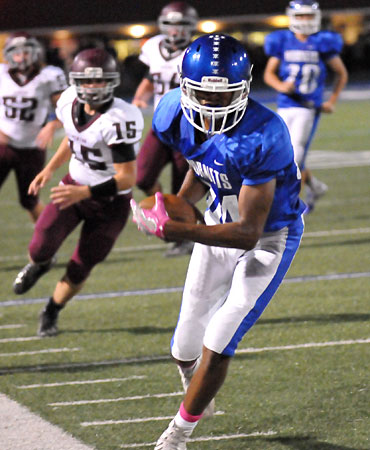 Catrell Wallace tightropes the sideline after a pass reception. (Photo by Kevin Nagle)

The Panthers wanted to try to contain Bryant’s 1,000-yard running back Ahmad Adams and they did to a great extent but, when the Hornets had to have it, Adams produced on the final scoring drive, scoring from 4 yards out with 2:16 left.

Rose, who had a big-time interception in the third quarter wiped out by a roughing the passer penalty, set up the go-ahead score with an interception off a pass tipped by teammate Trevon Herron.

Benton, with the lead, had its own interception by Daeshawn Ward. With a personal foul penalty on top of the return, the Panthers’ offense had a chance to drive for a game-clinching touchdown. After a holding penalty, they faced a third-and-19 at the Bryant 40 when Rose came up with the interception to give his team another chance.

Even after Adams’ touchdown, the Panthers made a bid to win it in the end. Behind stellar quarterback Peyton Hudgins, they drove to the Bryant 12 with 1:50 still to play. A 26-yard pass from Hudgins to Austin Taylor got it there. 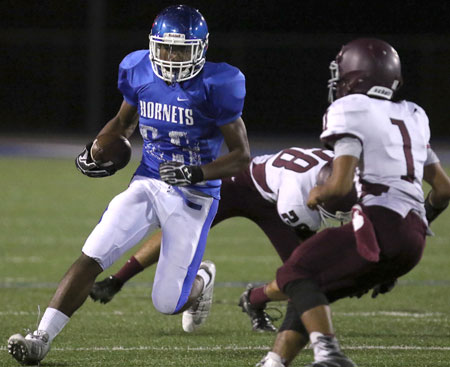 Hudgins tried to scramble on first down there and lost a couple of yards. On second down, Hudgins threw to the goal line but Bryant’s Gavin Wells knocked it down and nearly intercepted. A third-down throw was broken up by Bryant linebacker Catrell Wallace.

That set up a fourth-down play that seemed a little disjointed when it started. But Hudgins made a bid to pick up the 12 yards needed for a first down or to even score. He got to the 5 where several Hornets, led by Caden Fullbright, knocked him down at the sideline.

Bryant took over on downs and ate up the rest of the time. 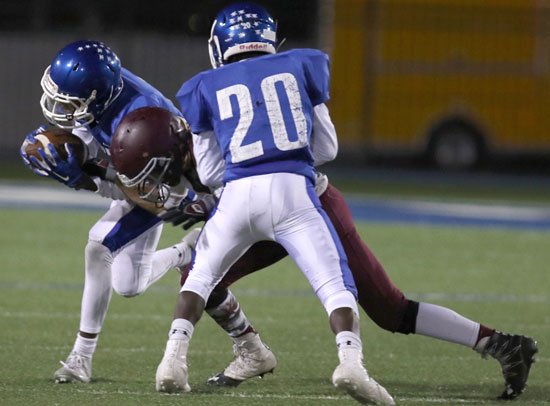 Trevon Herron (20) tries to block for Darrick Rose after an interception. (Photo by Rick Nation)

“They got us on the edge throwing and got us in the middle throwing it,” he continued. “They threw the football on us and moved the thing. But I don’t think they ran the ball very well on us. That’s a credit to our guys again.”

As a team, the Panthers were held to 89 yards rushing on 27 plays. Hudgins managed 30 yards on 11 carries and scored a touchdown.

But the Benton quarterback completed 13 of 22 passes for 209 yards and a TD.

“We made a few plays in the secondary when we had to,” Horn said. “We had a few miscues but that’s really the first time all year our secondary guys have been really stressed and pushed. Benton had a good game play too. And they executed well.” 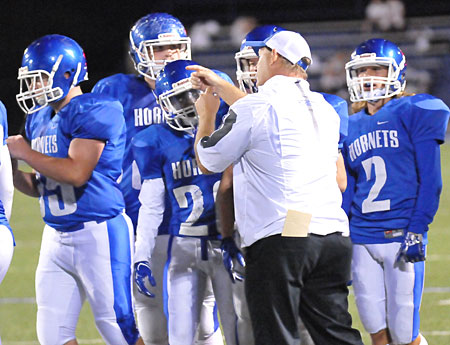 Meanwhile, Adams was held to 34 yards but 23 of that came on the touchdown drive that put the Hornets ahead for good. Quarterback Jake Meaders took advantage with 74 yards on 14 rushes including two touchdown runs. He also completed 7 of 11 passes for 110 yards and a score.

“They keyed on (Adams) a lot and Jake had some success early, had a big run for a touchdown and a few shorter ones just to keep them honest,” noted Horn. “And our other guys stepped up and made some big plays.

“We had a few protection issues on the offensive line but, overall, I thought they played well,” he added. “They’re a penetrating defense and we stonewalled them and got some big plays on it.”

The game started with a marvelous effort by Rose on a pop-up kickoff by Grayson Scoles. The kick was aimed at an unoccupied area in the Benton return alignment. Rose got to it first at the Benton 30 and claimed possession.

A 17-yard pass from Meaders to Wells, set up Meaders’ 8-yard touchdown run.

The extra point was blocked.

Benton came back with a 65-yard march in nine plays included two crucial third-down plays. The first was a 23-yard pass from Hudgins to Cade Clark. The second one was D’Anthony Harper’s 11-yard touchdown run.

The Panthers’ extra point attempt was blocked as well.

The Hornets took their turn. On a fourth-down play, Meaders found Gage Stark for a 36-yard touchdown play that had the Hornets back on top 12-6.

Neither team ever punted in the game. Bryant actually converted four of five fourth-down plays.

Benton’s response was a 69-yard drive in eight plays. The Panthers had to overcome a holding penalty along the way. Hudgins’ 38-yard completion to Ward made up for that and set up Hudgins 6-yard touchdown run.

This time, Austin Jones kicked an extra point and the Panthers held a 13-12 lead with six minutes still to play in the half.

In turn, Meaders completed a pair of passes to Wallace (including a 15-yarder to convert a fourth down). Off a fake to Adams, Meaders set sail on a 39-yard TD and the Hornets were back on top 18-13.

Benton made a bid, driving from its down 15. The drive appeared to be over when Hudgins was sacked. But the Hornets were penalized for a personal foul due to what the official saw as a late hit.

With the drive still alive, Hudgins found Connor Burrow for 24 yards then Clark for 7. But the Panthers wound up facing in a fourth-and-1 at the Bryant 31, the Hornets crashed in on running back Sean Thornton. The ball came loose and, even though Benton’s Thomas Pigue recovered, the Hornets took over on downs to preserve the 18-13 lead at the half.

To start the second half, the Hornets made a bid to make it a two-score lead. After driving to the 19, however, Meaders was sacked and the Hornets couldn’t overcome the 10-yard loss. When a fourth-down pass fell incomplete moments later, Benton took over.

A 23-yard run by Harper got them out of the hole but, on the next play, Rose made a tremendous play on a deep pass, intercepting at the Bryant 27. But a hotly disputed roughing the passer penalty wiped out the interception. And, given new life, the Panthers drove to a go-ahead score. A 25-yard completion from Hudgins to Burrow set up a 7-yard TD pass to Clark.

A holding penalty wiped out most of a 36-yard bolt by Adams and the series eventually closed out with Ward’s interception and the personal foul penalty that had Benton 29 yards away from a game-clinching score.

“We shot ourselves in the foot a little bit tonight but we made big plays when we needed to,” Horn acknowledged. And a lot of them came in that thrilling finish. 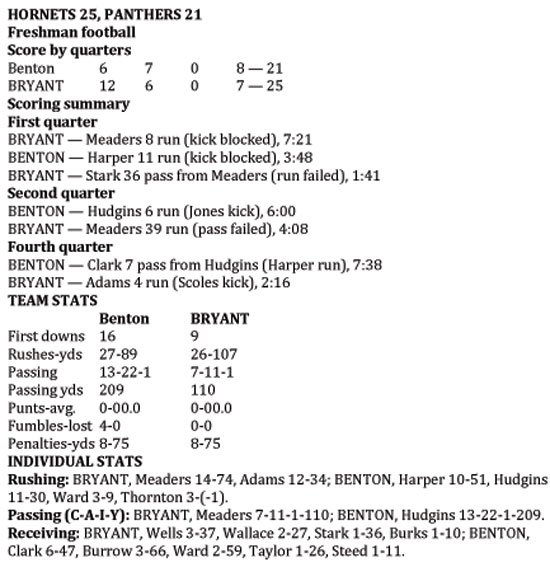 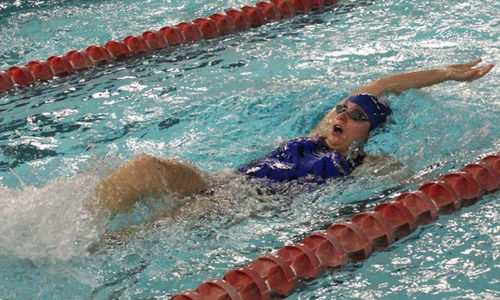