Freshman Hornets run to another meet title at Conway 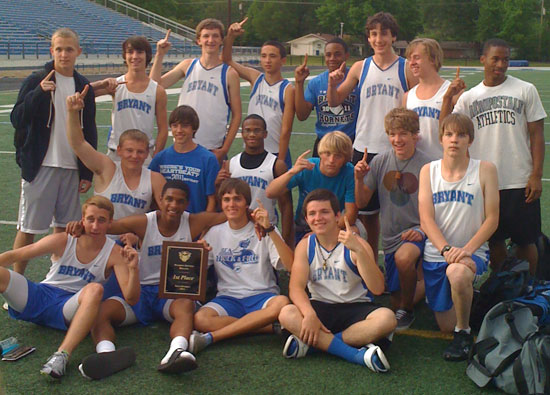 A new school record was set in the 4×100 meter relay by the team of Mar'Kevius Nelson, Brenden Young, Steven Murdock, and Clark Garland in a time of 45.54, which beat their own record of 45.81.
Nelson also placed second in the long jump, fourth in the triple jump, 4th in the high jump, and 8th in the 200 meter dash.

Justin Combs continued his unbeaten streak in the pole vault, placing first with a new personal best of 11' 2".

Also scoring for the Junior Hornets were:

Murdock and Townsend in the 400 meter dash (second and seventh, respectively);

Connor Chapdelaine in the discus (second);

Drew Allen in the discus (second);

and Noah Flores in the shot put (eighth).

"Davis and Combs continue to improve each week in the pole vault,” said coach John Orr. “That is a huge advantage to us if they can keep scoring points like that this year.

"The 400 meter relay team breaking their own record was fun to watch,” he added. “Those guys are hard to beat if they execute the handoffs.

“Allen and Chapdelaine also came through for us big,” the coach mentioned. “Mark Winn continues to dominate in the 800 and 1600, and Jim Dellorto impressed with great times in the 800 meter run and the 4×800 meter relay."