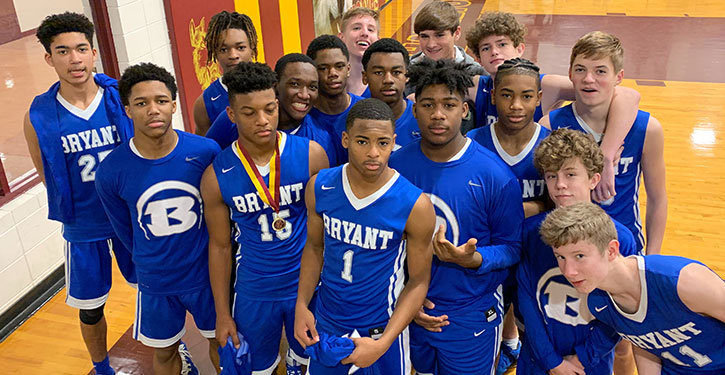 PEARCY — To start the 2020 portion of their season, the Bryant Hornets freshman team split its first two games at the annual Kameron Hale Invitational Tournament at Lake Hamilton High School on Thursday and Friday.

In their opener, they fell short of the Hot Springs Lakeside Rams, 50-44, on Thursday. They bounced back on Friday in the consolation bracket with a 47-38 win over the Malvern Leopard Cubs.

In their victory, Cory Nichols was named the player of the game on Friday. Nichols finished with 15 points. James Billingsley added 7, Darren Wallace and Jordan Knox 5 each, Braylen Montgomery and Chris Gannaway 4 apiece. Ivory Gilmore picked up 3, Aiden Baker and Jaylon Russ 2 each.

The Hornets held a 14-10 lead after a quarter with Nichols coming up with 7 of those points. Gilmore hit a 3.

It was 26-24 at the half with Montgomery scoring his 4 points in the second quarter.

The Hornets held Malvern to just 14 points in the second half. It was 38-31 going into the fourth quarter. Billingsley and Knox each had 5 in the third.

In the fourth quarter Wallace hit a 3, Nichols had a pair of field goals and Billingsley knocked down a pair of free throws.

The win improved Bryant to 4-6 on the season.

In Thursday’s loss, the Hornets led early. It was 12-7 after a quarter but Lakeside managed to tie it 17-17 by halftime. Going into the fourth quarter, the Rams held a 33-31 edge. They hit 8 of 12 free throws down the stretch.

Nichols and Nasir Vinson each had 5 points in the fourth quarter as the Hornets tried to keep up. Nichols finished with 9 in the game. Vinson, Knox and Billingsley scored 8 apiece. Gannaway added 4, Gilmore 3 and Wallace 2.