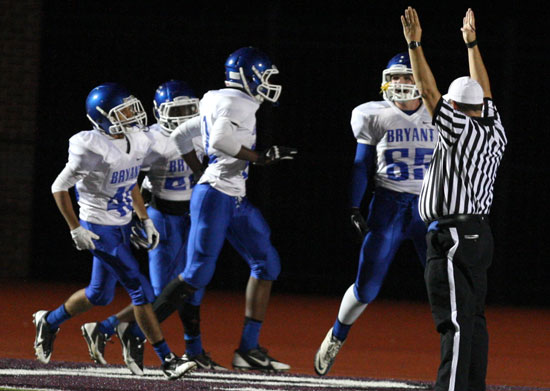 BENTON — When the Bryant Hornets freshman team lost 9 yards on their first offensive snap, then lost 7 on their second one and, after an incomplete pass, managed a punt from their own 13 that went just 10 yards, few could’ve imagined that, before it was over, they would wind up with a 35-0 win with the sportsmanship rule being implemented less than a minute into the fourth quarter. 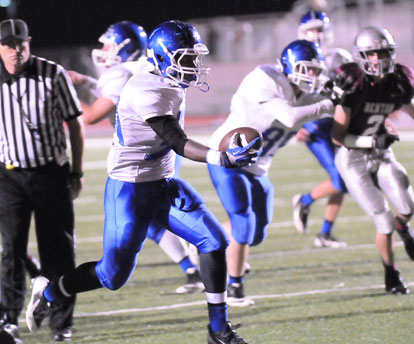 But that’s what happened Tuesday night as the Hornets closed out the 2013 season with a win over the rival Benton Panthers.

While it was feast or famine for the Bryant offense much of the night, the defense for the Hornets was outstanding. It’s a defense that showed what it was capable of earlier in the season when it shut out North Little Rock as Bryant handed the eventual Central Arkansas Junior High Conference champs their lone loss of the year. Though they had some ups and downs on other nights, the Hornets’ defenders had it going again against the Panthers who mustered a net of just 29 yards of offense and three first downs. Benton had 30 yards of offense in the first half and all three of those first downs as the Hornets got tougher as the night went on.

They set the tone after the short punt gave Benton possession just 23 yards from a score. They forced the Panthers to turn the ball over on downs at the 25. 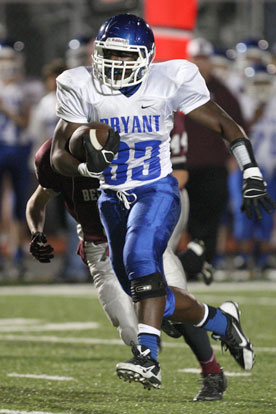 In fits and starts, the offense put together a Bryant scoring drive, covering the 75 yards in 11 plays. Six of those snaps resulted in 3 yards or less. But a 15-yard keeper by quarterback Beaux Bonvillain converted a third down early in the drive. DeAmonte Terry dashed for 19 yards and, later, Bonvillain set up the touchdown with an 18-yard pass to Austin Kelly. Terry wound up scoring from the 2.

“They got to us because they were rushing us, twisting us there in the middle,” Hornets head coach Kenny Horn said of the Benton defense. “Anytime you do that you’re going to cause a little confusion, especially for junior high kids. But we hit it right a few times and got some big plays and scored some points.”

Bryant tried to add a two-point conversion running the old swinging gate formation and it appeared they had it when Phillip Isom-Green took a pitch from Landon Smith, drew the defense on a run toward the sideline then tossed a pass over their heads to Kelly but it was ruled Isom-Green was past the line of scrimmage when he threw the ball so it remained 6-0.

In response, Benton put together a pair of first downs. A 36-yard kickoff return by Ty Callahan gave the Panthers good field position and, behind the running of Brandon Hunter and Braylon Alcorn they drove to the Bryant 27. But Hunter was stuffed for a loss on first down there and the Panthers were unable to recover. When Nate Beck’s fourth-down pass fell incomplete, the Hornets took over on downs with 3:04 left in the half.

Benton wouldn’t muster another first down the rest of the game and the Hornets’ defense would punctuate the victory with linebacker Hayden Knowles’ 57-yard return of an interception for a touchdown with 7:11 left in the game. 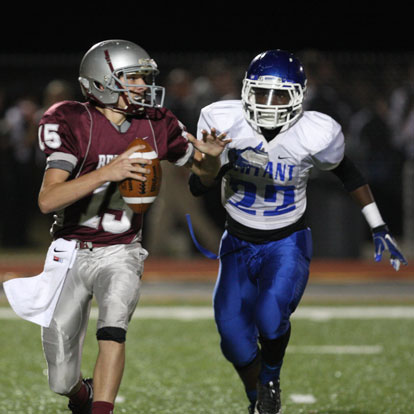 But the turning point in the game came right before the end of the first half. The Hornets had been forced to punt and a 52-yard boot by Kelly pushed the Panthers back to their own 15 with 1:45 left in the half. On a second-and-5 at the 20, Beck was sacked by Knowles and Marvin Moody. Bryant got a break when the Panthers had to use a timeout with :56 left to set up a third-down play. An incomplete pass stopped the clock as well.

So Hunter punted from his own end zone and the Hornets got the ball back at the Benton 43 with :40 still to go. A pair of incomplete passes followed but then Bonvillain found Garrett Misenheimer for 9 yards. The Hornets took a timeout with :07 left before, on a fourth-and-1, Bonvillain threw deep down the right sideline. Misenheimer made a twisting grab at the 5 and staggered past a Benton defender and into the end zone with :01 showing on the clock.

A speed sweep to Kelly completed the two-point conversion and what had been a tight, rugged 6-0 game was suddenly 14-0 at the half. 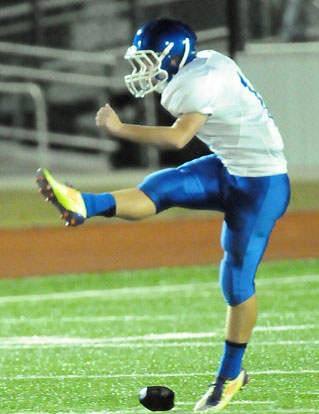 And when Misenheimer covered Benton’s onside kick to start the third quarter, the Hornets raced down the field for a quick score to add to that. Cameron Coleman ran all three plays in the drive, finishing with a 37-yard jaunt with 7:08 left in the quarter.

Chase Kincaid kicked the extra point and it was 21-0.

And the defense just stepped up the pressure on the Panthers, especially when the kickoff had to be covered at the 6. Alcorn was stopped with a 1-yard gain then Beck’s pass was nearly picked off by Moody and, on the deflection by Kelly. A third down throw to Hunter picked up just 3 yards and the Panthers were punting again.

Given possession at their own 48, the Hornets marched to another score.

The key play came early in the drive. Facing a third-and-11 from their own 47, the Hornets crossed up the Benton rush with a run by Coleman, who broke it for 16 yards. On the next snap, Bonvillain hit Kelly for 18.

A holding penalty subsequent to that threatened to sidetrack the Hornets but Bonvillain and Kelly hooked up again for 14 yards. Terry bashed for 4 yards to the 10 then sliced his way into the end zone on the next play.

Isom-Green had a sack and Madre Dixon stopped Alcorn for no gain and the Panthers went three-and-out. 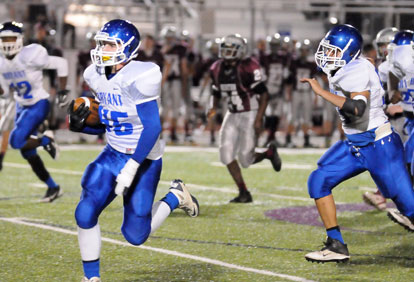 Hayden Knowles heads toward the end zone after his interception. (Photo by Kevin Nagle)

In turn, Troy Quinn dropped Coleman for a loss on Bryant’s next snap and a holding penalty followed. The Hornets punted it back on the second play of the fourth quarter only to have Knowles’ pick-6 result on the Panthers’ subsequent first down.

Reserves took over after that and, unfortunately, the game was stopped with just under four minutes to play when Bryant’s Jessie Smith injured a leg. After an extended delay to get him on a stretcher, into an ambulance and off to the hospital to be checked over thoroughly, the Hornets ran out the rest of the clock behind the running of Landon Smith.

The Hornets finish the season 8-2, a game behind in the conference standings.

“You’re disappointed because I think these guys were capable of winning the conference easily,” Horn related. “I still think they are.”

“I remember when the guys that are seniors were in ninth grade, we went 7-3 but I could narrow it down to five plays where we lost three games,” he recalled. “I can narrow it down to about three plays with these guys.

“I think overall it was a good season. We won a lot of games and they were competing. And we took care of Benton. That’s always a bottom line for us in the program. Suit as many kids up as we can and get as many guys ready as we can.

“These guys that coach down here, Kirk (Bock), Travis (Queck), Mark (Cain) and John (Orr), they’re real good coaches. They work hard and they get them coached up. I don’t think people realize how lucky we are that these are the guys we have coaching here. We’ve got great coaches at this level. And I’m fortunate to be working with them.”