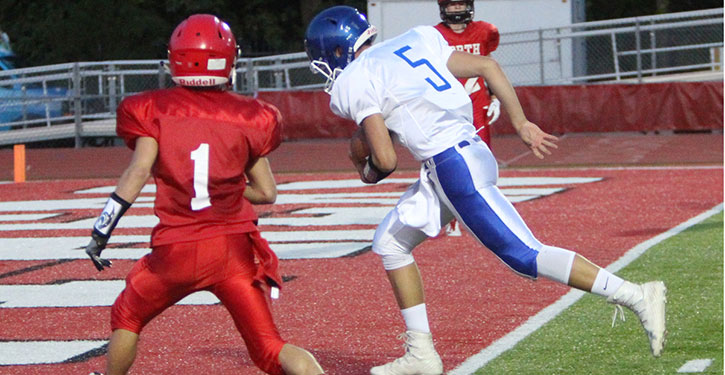 The Bryant Hornets freshman team will try to close out an undefeated season tonight when they travel to play the rival Benton Panthers in what could be called “The Junior Salt Bowl”. The game will kick off about 30 minutes after an eighth-grade game between Benton and the Bryant Blue Hornets of Bethel Middle School, which starts at 5:30 p.m.

Both games will be streamed live on FidelityLocal6.com. Jim Gardner, voice of the Benton Panthers and Rob Patrick, voice of the Bryant Hornets, will team up on the broadcast of the freshman game.

The Benton freshmen come into the game 7-2 overall and 6-2 in Central Arkansas Junior High Conference play. The Panthers have won four games in a row since a 20-8 loss to North Little Rock.

At 9-0 overall and 8-0 in league play, the Hornets have already clinched at least a share of the conference championship. A victory tonight will give them the title outright. It would be the fourth conference championship in a row for Bryant freshman teams under head coach Kenny Horn who has led the Hornets to 87 wins and just 12 losses since being promoted to the job in 2008, after serving as defensive coordinator before that.

Though Benton leads the series between the two rivals 18-16-1 since 1986 when two Benton junior highs combined into one. Bryant, however, has won that last four and 13 out of 14 since 2004.

Defensively, the Panthers have given up 704 yards on the ground and 841 yards through the air.

The Hornets’ defense has surrendered 554 yards rushing and 457 yards passing.