Tyler Green fired a nine-hole round of 3-under par 33 to lead the Bryant Hornets to victory over[more] the Cabot Panthers in a dual match at Hurricane Country Club on Tuesday. 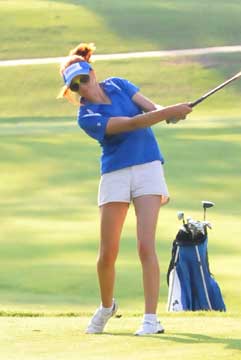 Green, who birdied the second, third and seventh holes, was individual medalist, finishing two strokes ahead of teammate Austin Harmon, who finished with a one-under 35. Though Harmon bogeyed the first hole, he came back to birdie the third and eighth holes.

For the girls, Cabot’s Marlena Weatherly was individual medalist with a round of 45, edging Bryant’s Peyton Weaver, who carded a 46. Ann Roe, the only player competing from Mount St. Mary Academy, turned in a round of 47. The Lady Panthers finished at 141 as a team to Bryant’s 150.

For the boys, Chase Thornton shot an even par 36 to match Cabot’s top finishers, Parker Pearon and Arthur West. Gary Williamson completed Bryant’s scoring quartet with a round of 43.

Nick Canale paced the Hornet JV with a 43. Luke Brantley and Nick Jenkins each shot a 44 with Ross Weaver, Mark Winn and Allen Humbard each turning in rounds of 45. Logan Moore finished at 54.

Along with Weaver’s round, Bryant’s scoring trio included Savanna Cathey with a round of 48 and Carley Miller, who finished at 56. Peyton Jenkins carded a 59 and Tiffany Robinson finished at 66.

The Bryant team will host a match again on Thursday.