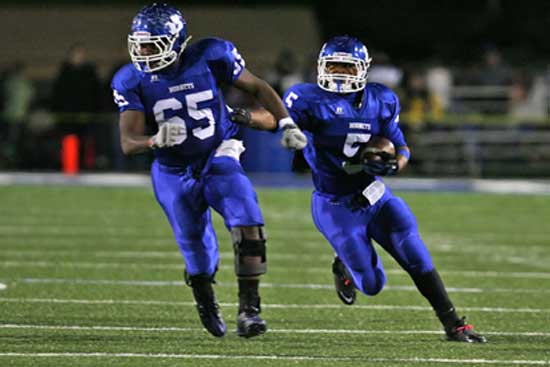 This payback thing — it just usually doesn’t[more] work out. 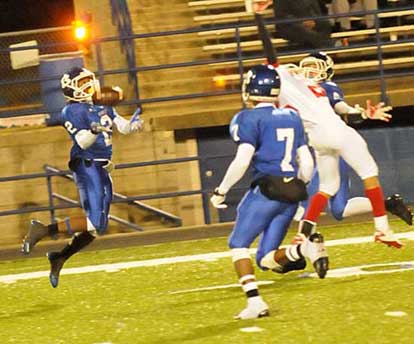 The Bryant Hornets’ own history bears that out. In 1999, the Hornets opened the season with a 30-15 win over the Conway Wampus Cats. The two teams met again in the first round of the playoffs. Conway relished the second chance but, as it turned out, the Hornets prevailed again, 21-14.

In 2005, the Hornets opened the campaign with a 14-7 loss to the Benton Panthers. And, come playoff time, the two rivals were pitted against each other again. Given the second chance, however, the Hornets came up on the short end of a 35-28 game (which, as it turns out, was the last time Benton has defeated Bryant.)

That brings us to this season. In week two, the Fort Smith Northside Grizzlies handed the Hornets the first of their two regular-season setbacks, hanging on for a 45-40 win. Again, the playoffs brought a rematch and the Hornets felt confident they could turn the tables. 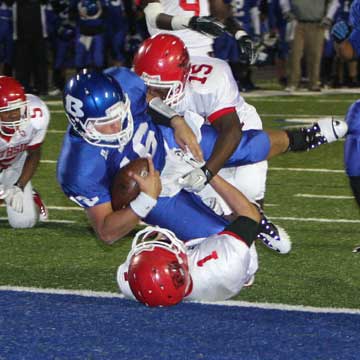 The Grizzlies prevailed again, 42-35. This time, they ended the Hornets’ season.

Ironically, Northside will now be on the payback track as they take on crosstown rival Southside in the second round, seeking to avenge a 49-7 setback to the Rebels on the last Friday of the regular season.

Most likely, the Grizzlies won’t fare any better than Bryant in the payback department.

For the Hornets, Friday’s loss was a crusher. Bryant rallied from a 35-21 deficit to tie the game with 7:08 to play. Northside, however, answered with an 80-yard drive to regain the lead then blitzed the Hornets’ offense into submission with a pair of sacks that foiled a last hope possession in the final 2:30.

But, as much of a gut-punch as the loss was, the tears that were shed afterwards were about the end of it all in a sport that requires so much effort on a daily basis and creates such a bond among those that endure it. 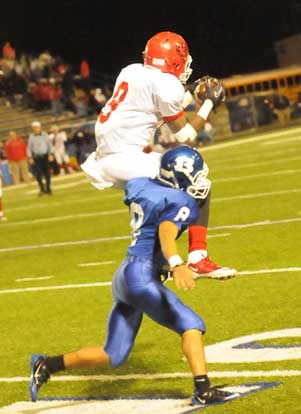 For most if not all of the seniors on the team, it not only marked the end of their high school football careers but their football-playing days completely. Many players lingered on the field for quite awhile after the game.

They go out matching the seniors on the 2010 team as part of 25 victories in three seasons, most in school history.

Few expected the team led by those seniors to be so successful. But they won a share of a conference championship despite being overmatched physically almost every game.

The Grizzlies were determined not to let the Hornets beat them through the air after they’d been burned for 335 yards in the previous meeting. Using offensive stars Shaquille Jones (a record-breaking wide receiver), Donny Jones (their top running back) and even quarterback Kenrick Burns — their best athletes — in the secondary, Northside was able to effectively apply tight man-to-man coverage on the Hornets receivers, knowing they didn’t have to stay with them long because their teammates were attacking Bryant quarterback Hayden Lessenberry with blitz after blitz after blitz. The Hornets just couldn’t protect him, resulting in six sacks, two critical interceptions and just 89 yards passing (with 45 of that coming on a reverse pass thrown by wideout Sawyer Nichols). 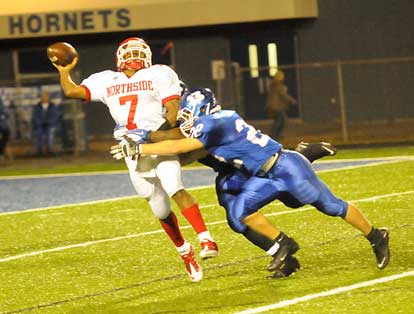 The Hornets were, however, able to pick up big yardage on the ground. Even with the sacks subtracting from the total, they picked up 200 yards on the ground including 188 on 22 carries by senior Karon Dismuke, who refused to be tackled much of the way, utilizing some devastating stiff-arms on two or three occasions.

Bryant’s defense actually slowed down the Grizzlies’ offense based on the previous game. Northside accumulated 510 yards of offense compared to 630 in the first meeting. Burns still amassed 404 yards of total offense, rushing for 141 and passing for 263.

The Hornets forced two turnovers and cashed one in for points. The other, fatefully, they did not.

In their hurry-hurry offense, the Grizzlies ran 86 plays compared to Bryant’s 51. The Hornets’ defense was on the field a lot. 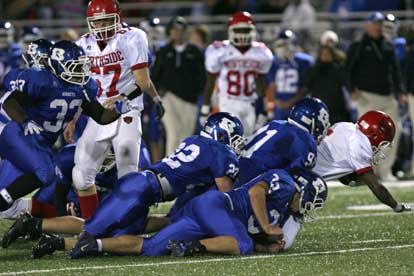 Still, they’d come through with their best series of the night to set up the tying touchdown drive. Dismuke had just scored the third of his four TDs with 8:19 to play. As usual, Jace Denker’s kickoff went for a touchback and the Grizzlies started from their own 20.

A procedure penalty pushed them back then Donny Jones, who rushed for 106 yards on 24 carries, sliced for 7 yards. On second and 18, the Hornets finally got to Burns, who had niftily (and frustratingly, for the Hornets) avoided getting sacked the rest of the night. And, with Bryant’s Tim Kelly and Jacob Powell draped all over him, Burns tried to throw the ball away only to be cited for intentional grounding. 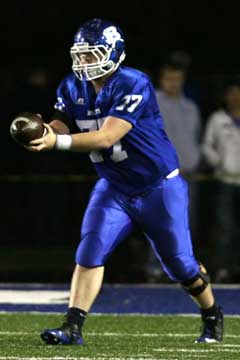 From the 3, Burns was unable to complete a pass and, on fourth down, punter Gray Stanton avoided the Hornets’ bid for a block but his kick only went 20 yards. Given great field possession, the Hornets eventually got it in the end zone from 11-yards out.

Bryant’s defense, however, was unable to duplicate its previous success as Northside drove 80 yards for the go-ahead score. Along they way, they needed only once to convert a third down. On a third-and-5 from their own 40, Burns found Shaquille Jones down the middle for 17 yards to the Bryant 43.

They needed eight plays after that to get to the end zone. Burns scored from the 1 with 2:29 left in the game.

The Grizzlies scored first in the game too. After forcing a three-and-out, they took over on their own 26 following Ian Shuttleworth’s punt. Burns completed 6 of 7 passes including a 26-yarder to Shaquille Jones to set up a 6-yard touchdown keeper by the Northside quarterback.

The Hornets twice had big plays on special teams negated and the first came on the subsequent kickoff. Aaron Bell returned the kick to the Northside 45 but the Hornets were cited for an illegal block in the back early in the return. With the mark-off from the spot of the infraction, the Hornets were backed up to their own 16. Another three-and-out and Shuttleworth punted. 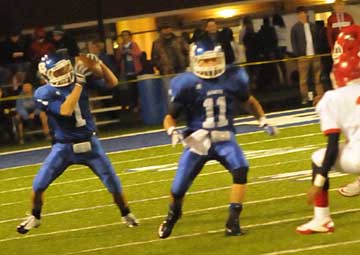 Northside appeared to be on its way to another score but when they reached the 9, they faced a fourth-and-1. Donny Jones got the call and had the yardage for a first down only to have the ball get away from him. The ball was on the ground, it seemed, for several seconds without anyone but the officials noticing. Finally, Royal scooped it up and headed the other way. He made it to the Northside 32.

And, on the next play, Dismuke slashed through the Grizzly defense for a touchdown.

On the resulting kickoff, the second bad break hit the Hornets. Denker played an onside kick perfectly with Stephens rushing down the field to recover it. But the Hornets were cited for being offsides, negating the play. 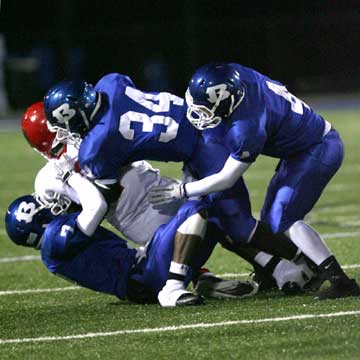 With the element of surprise gone for the Hornets, Denker kicked one into the end zone for a touchback.

In turn, though, the Hornets’ defense forced Northside to turn the ball over on downs at Bryant’s 44. But any hopes of taking advantage of the field position were dashed by back-to-back holding penalties — something the Bryant defensive coaches would be lobbying to have called on Northside’s offensive line all night to no avail.

On the Grizzlies next possession, starting at their own 26, Shaw and Dunnahoo made back to back plays to produce a third-and-3 at the Northside 33. But the Hornets couldn’t get off the field. Burns kept for 10 yards to keep the drive alive. He would later cap it off with a 29-yard scamper after he was hit in the backfield.

Trailing 14-7, the Hornets came right back to tie it. Sparked by a 20-yard run by Dismuke and carries of 16 and 12 yards by Jalen Bell, the Hornets reached the 11 and, on third down there, Dismuke crashed and dashed for the touchdown that, with the extra point made it 14-14.

Northside’s answering series reached the Bryant 38 before it was stopped by the Bryant defense. Along the way, Tim Kelly and Winfrey had fine defensive plays. With about a minute left to play, the Grizzlies punted the Hornets back at their own 13. 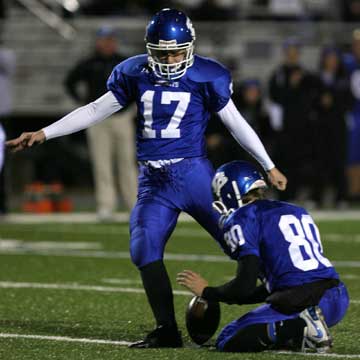 With :51.5 left in the half, the Hornets tried to take one more shot. Lessenberry rolled left but couldn’t escape the pressure. He was in the end zone when he was hit initially and, trying to avoid a sack, tried to fling a throw under handed and with his off hand toward a teammate but just as he was letting it go, the defender spun him around. The ball popped into the air and into the arms of Northside linebacker Brandon Cottrell.

Instead of 2 points, it wound up being 7 and a 21-14 halftime lead for the Grizzlies.

The Hornets made a bid to get that TD back before the half was over. Dismuke’s 15-yard run got them out of a hole then, with :35.8 on the clock, Bryant head coach Paul Calley called a timeout to set up a play. The Hornets ran a reverse and the ball ended up in the hands of Nichols. He fired a pass deep downfield to Winfrey who hauled it in and was tackled at the 12.

On the next play, Lessenberry tried to find Nichols in the right front of the end zone only to have Burns, playing safety, step in front of it and intercept to end the half.

Winfrey made an interception to halt Northside’s first possession of the second half. He returned to the Northside 46 and, a pair of short runs by Dismuke, picked up a first down to the 31.

But Lessenberry was sacked back to the 38. Though he completed a 13-yard strike to Winfrey, on the next play, he was sacked again. The Hornets went for it on fourth down but, again, the blitz got to Lessenberry as he looked for an open receiver. All of the receivers, however, were being tightly covered.

Taking over on their own 40, the Grizzlies added to their lead. A 32-yard pass from Burns to Caleb Meyer was the key play. Eventually, Donny Jones took it in from the 2.

Down by two scores, the Hornets began their comeback. A splendid kickoff return by Thomas had them 42-yards from cutting into Northside’s 28-14 lead.

They reached the 6 only to have a holding penalty push them back. Two plays later, they faced a fourth down at the Northside 11. Lessenberry took the snap, rolled to his right and found a seam, cutting back for an 11-yard touchdown run. He was stunned by a hit to the head as he got the end zone but would return.

Bryant tried the onside kick again only to have the Grizzlies cover at the Bryant 48. From there, it took five plays for Northside to bump the lead back to 14. Burns’ 9-yard keeper put the points on the board.

Another strong kickoff return, this time by Hayden Daniel, had the Hornets 48 yards away from cutting into the lead again. Dismuke dashed for 8 yards on first down but he was stuffed for a loss of 2 on second down. On third-and-4 from the 42, Lessenberry was sacked, forcing another Shuttleworth punt.

Kicked back to their own 16, the Grizzlies picked up a first down but, a play later, Aaron Bell, coming on a corner blitz, hit Donny Jones in the backfield as he took a handoff. The 3-yard loss became huge when, on the next play, Burns threw incomplete on a pass play and nearly got intercepted.

Bryant’s comeback commenced with a 30-yard catch and run by Winfrey on a bubble screen. Dismuke dashed for 14 to the 25 then a pair of keepers by Lessenberry got the ball to the 12. On the first play there, Dismuke scored from the 12 and the Hornets trailed 35-28.

Bryant’s defensive stand and the short punt ensued as the Hornets tied it before Northside’s tell-tale touchdown drive.

The Hornets finish the season 8-3.