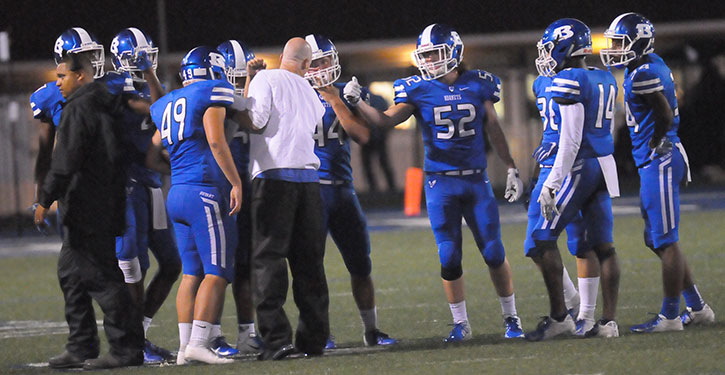 Editor’s note: The live stream of tonight’s game is here

Two of the best running backs in the state will be on display tonight when Latavion Scott and the Bryant Hornets visit Samy Johnson and the Little Rock Catholic Rockets in a 7A-Central Conference showdown at War Memorial Stadium in Little Rock.

Of course, the success of both those running backs has been in large part due to the great play of their respective offensive lines, who both may be coming off their best games of the season: Bryant’s a 16-7 win over Fort Smith Northside in a half, with the second half called off due to lingering lightning; Catholic’s in a two-day come-from-behind win over Cabot.

The Rockets are 4-0 for the first time since 1990 while the Hornets are two points (and a bad penalty call or two) short of unbeaten.

Head coach Buck James was proud of the way his Hornets came back after the disappointing one-point loss to Fayetteville two weeks ago.

“I’m glad that the kids are resilient,” he stated. “And I’m glad that they understand the process and when everything else looks crazy, I think our kids really focus the best and show a lot of maturity and understand the job at hand. I’m really proud of the way they have endured through the first part of this season.”

In that half against Northside, Scott, behind that offensive line, rushed for over 100 yards, including big chunks of what turned out to be a clinching 90-yard drive just before the stoppage.

Meanwhile, the Hornets’ defense did a tremendous job of slowing down Northside’s talented rushing quarterback Derrick Wise, who went for 139 in the Grizzlies’ previous game against Van Buren.

“We held him to like 30 yards rushing,” James noted, acknowledging that it was just in one half. “To be able to do that, I thought, was great.

“If we can stop the run, keep passes in front of us and get off the field on third down, we’ve got a chance to be a good football team,” he added. “That’s what we were able to do last week.

“Our practices have been better. I think we woke up a little bit. Our offensive line blocked the best they have all year long and Latavion backed it up with great runs. Ren (Hefley) made some adjustments (at quarterback) and audibles and hit some big plays. Our kids responded well.

The Rockets are the third team of the four Bryant has played that comes in undefeated.

“We’re going to get a different Catholic than we have maybe the last couple of years when they came in here limping a little bit,” James said. “Now, they’re on the top of the heap and want a chance to make a big playoff run.

“They run the football,” he acknowledged. “Whatever happens, this game is still running the football and stopping the run, tackling and blocking. They do a good job of opening up creases for their tailback.

“They do a good job of getting off the field (defensively). They bend a lot, but they don’t break. They’re an opportunistic team. It’s a team that does what they do very well and they feel like they have a chance to win and that’s what you call a good football team.”