Adrian Henley has announced his candidacy for the mayor’s position in Bryant. 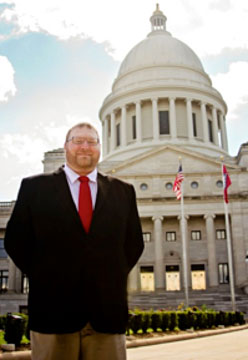 As the communication link between these city departments and the council, he said he gained valuable knowledge aboutand insights into the inner workings of these departments and in the process, he learned how to make balanced decisions that benefit both the citizens of Bryant and the city itself.

A resident of Bryant for over 20 years, Henley has owned and managed three small local businesses. He said he understands firsthand the everyday concerns of Bryant’s business owners and managers.To further his understanding and knowledge, he noted that he earneddegrees from UALR in Political Science and Business/Human Resources Management.

Henley said he believes that his six years of experience on the council, combined with his business experience and college education, make him uniquely qualified to serve as mayor.

“As Mayor, I will bring a conservative approach to the city of Bryant,” he said. “This will include a city government that represents every resident of Bryant. My highest priority is to stabilize the fiscal situation, which will assure our citizens that future generations will enjoy allofthe great opportunities the city of Bryant offers.”

A devoted family man himself, Henley has a wife, Amy, and three sons: Tye, 11, Landon, 7, and Preston, 3. Daughter Evalynn joined the family in July.

“So many of our city positions, from the highest to the lowest, have experienced an unprecedented turnover ratein the past few years,” he said. “I plan to utilize my business management skills to help bring stability back to these city offices. I’ll work to lower the turnover rate — to retain the valuable workers the city already employs while making sure that qualified people of the highest integrity and principles are hired to fill vacancies. City employees should all possess a true understanding of the duties and responsibilities of the positions they hold. The city needs a firm governmental foundation and building one is the best way the city of Bryant can focus on serving its citizens.”

Henley’s goals as mayor include:

You can Learn more about Henley’s goals and ideas on his website: www.bryantmayor.com